Rayme Rossello of Comida on the Last Twelve Months, Mistakes, and Future Plans

Share All sharing options for: Rayme Rossello of Comida on the Last Twelve Months, Mistakes, and Future Plans 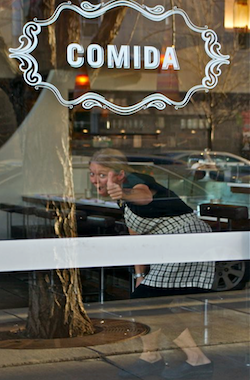 Comida Cantina, the Longmont restaurant owned and operated by Rayme Rossello turned one this week. What started out as a bright pink food truck named Tina evolved into a modern Mexican restaurant concept that is now both a gathering spot for the Prospect neighborhood,as well as also a dining destination for lovers of Mexican food. Rayme Rossello has been in the food industry for many years- she started Proto's Pizza in 1999 and stayed with the company through new locations, earned a degree in pastry from Culinary School of the Rockies, and launched one of the first food trucks in Boulder, which was included by Smithsonian Magazine among the top 20 best food trucks in the country.

Eater sat with Rossello to talk about the last twelve months, the joys and sorrows, and the future of Comida.

Did you always envision Comida having a brick and mortar location or did that evolve later from the truck? I actually wanted to start with a restaurant, but calculated that doing the truck might cost less. Ironically, I spent more than 2 times as much to open the truck as I did the Cantina in Prospect. But how was I to know that someone would actually just "give" me a restaurant almost 2 years later? I mean, I'm good at making things happen, but that was insanely fortuitous.

Where did you get the inspiration for your restaurant? I started dreaming about a place called Comida after traveling for years to visit my mother when she lived in Cuernavaca and San Cristobal de las Casas, Mexico. I always came home and made guacamole every day for a month. Years later, I remember writing in my journal.... "It's called the Comida Cafe." It was 2007. My friend Lina Avila is the chef at a great beach cantina in Tulum and she would let me cook with her from time to time.Her flavors and the simplicity behind her presentations always made me crave the food she cooked. The twist at Comida is that a lot of the flavors are also really Southern. My parents are from the South and I grew up eating biscuits and grits and things that had to be mopped up with sauce. My dad still never eats a meal without finishing up with dessert. His love of food is a huge part of my internal compass when it comes to creating recipes.

What was your goal and focus when developing the concept and menu both the food and beverage one? My overall focus and mission has been to offer high quality, hand made Mexican Street Food at a price that allows and makes people want to keep coming back. The Cantina menu is a direct extension of the truck menu. With the truck I knew I needed to keep the menu small. I wanted little bites that people could afford. And they needed to be made quickly. No one wants to wait for 10 minutes standing outside a truck in the cold for a taco. Everything is made from scratch. The only thing we don't make ourselves are our tortillas- for lack of space. I applied the same concept at the Cantina - except that we have a little more space and can make a few more items. I had been to a place in Phoenix where they had us order from a sushi-style menu. I liked that idea for tacos- it allows people to order more family-style and encourages sharing. And as luck would have it, the Cantina in Longmont started out as a sushi joint. With drinks, I applied the same principles. We hand-squeeze all of our juices and use only 100% Agave tequilas. About 50 % of our products are sourced from people we know. I also wanted a really fresh and diverse selection of non alcoholic beverages. So, we make our own Horchata and the Jamaica is fresh and not too sweet.

Why did you choose to open your restaurant in Longmont and in this particular location? I had lived in the Prospect neighborhood from 2001 to 2006. I knew the people and had friends there. When I brought the truck the first time, we had a line for three hours. That actually happened every time we brought the truck to the park. I knew the restaurant would do well. The sushi restaurant that was in the space before me was owned by a really great couple and they approached me first. When that deal didn't work out, I kind of gave up on the idea. Then two weeks later the building owner called me and offered me the space at a price I could not say no to.

Did the space have any particular challenges? Challenges.... no. The space is small, but was really well designed. And there was still liquor on the shelves for crying out loud. It was more than turn key! Really, the whole thing just made sense from the start. Right down to the fact that the ceiling was already the color of my truck. Kind of crazy!

The first week of the doors being open: how was it? What do you remember? It was awesome! It was busy! The kitchen fell right into a rhythm and rocked it. The bar took a few more days to figure out the flow. We were squeezing all the citrus by hand for each drink as it was ordered- not one of my better ideas! I think we sold something like 214 margaritas on the first night. We are a 64 seat restaurant. That was a shit ton of squeezing and shaking for two people. And it took way too long for people to get their drinks. We made corrections quickly though and my staff created a program that was both efficient and delicious.

What has been the most successful food item and the most successful drink? And did you expect them to be this way? For food, it is a tie between the Sirloin Situation taco over sweet potato mash and the Spicy Shrimp taco over jalapeño grits. I knew from the truck that people liked the sirloin, but we had never done the shrimp on the truck. Once we started making the grits by grinding up hominy it was all over. They are so creamy and comforting. It's easy to just eat a bowl of them and take a nap. And the drink is easy, the watermelon jalapeño margarita. I knew once people tried it they would ask for another. It's just spicy enough, and just sweet enough. And before you know it you're contemplating a third.

If you were to start all over, what would you change? I wouldn't start all over. I like where I'm at and where I'm going. I've made mistakes and will continue to do so. But there is always learning. I don't exist inside a bubble. I ask for help all the time. I am quite clear I could never do all of this alone.

What are you most proud of at Comida? My staff. They are amazing. They show up on time, are really good at what they do and they work really hard. I like spending time with each and every one of them. A really smart man I worked for once said to me that if I ever showed up to work and found myself m-fing someone on my staff, I would have no one to blame but myself. I have taken that to heart. I have surrounded myself with great people and I love what I do.

What is next for Comida - in the near and far future? Near future, Comida Denver. That will open in the Source on 33rd and Brighton Bouleard in July. And after that Boulder. People often ask if ill do another truck, but I don't think Tina could ever be topped. She's really my favorite and the reason that any of the rest of this is possible.