Share All sharing options for: Deanna Scimio: Life as a Sugar Call Girl

Welcome to The Sugar Files, where Eater uncovers and features the city's best pastry talent. In this edition, executive pastry chef Deanna Scimio of Gather, gets the spotlight. 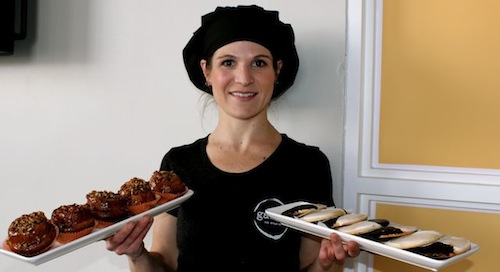 No stranger to Denver's pastry scene, Deanna Scimio has been around the block more than once or twice. Her diverse work background spans two decades and includes running pastry programs at nationally recognized kitchens, like Fruition and Frasca Food and Wine, as well as mastering health-conscious confections at Watercourse Foods. This Pittsburgh native made her kitchen debut at a Taco Bell in Houston and has worked hard to get where she is today, thriving in her role as pastry chef at the brand new gourmet lounge, Gather, a sophisticated cafeteria and bar. Denverites in the know are already hooked on her exceptional handmade pastries. Between batches of dough and swigs of strong coffee, the chef opened up about her vision for Gather, her qualms with Denver's desserts, and clocking in at midnight.

You've worked at a ton of different venues over the last 18 years, what has been your best experience? The Grateful Bread production bakery. They do bread for the Four Seasons, Fruition, Table 6, all the high-end restaurants. 3,000 loaves a day out of three convection ovens, it's a fucking marvel. It's a 24-hour operation, the finest matrix of time I have ever seen in my career. If somebody shows up 20 minutes late the whole day is fucked. It's phenomenal. I was supposed to be there for six weeks filling in, doing cinnamon rolls. I'm like the sugar call girl. I ended up staying for two years and learning bread on a huge scale. It was badass.

A sugar call girl? Can you confess one of your tales? I was the pastry chef at Frasca and one of my girlfriends was working at The Kitchen in Boulder. She called me one day sick and hung over, "Can you come cover my shift at the Kitchen." I had never been there. "You'll understand right away." I get there and read the menu and I just started baking and everyone walking in was like, who are you? She meandered in a few hours later like Courtney Love, red eyes and heels, and so that's how I ended up working in that kitchen.

What sucked you into the pastry world? During culinary school, we had a month internship at a bistro in Carpentras, Provence. It was crowded and boring. I just wasn't interested, and I knew three blocks away was Jouvaud Pattisere, a Relias bakery. There's only sixty in the world- you have to be three generations old, a master pastry chef has to be on site, and there has to be a full on boulangerie, pâtisserie, and chocolatier. The master pastry chef was 92, his son running the place was 37, and his son was an apprentice for seven years without pay at 12 years old. You make everything from scratch, including all the candies. I stood there and stared in the window everyday. Finally, three days before I was leaving, this chick came out and was like, "Dude, who are you?" She was from San Diego. She let me in the kitchen to watch. I was the only girl on the floor. The women were dishwashers and downstairs they tied bows.

Did they let you make anything while you were there, even though you weren't a man? The old man came in with bushels of apples on a cart, and he told me to peel, cut, and dice all of them by hand. I'm loading them into this huge mixing bowl. By the end my hand is bleeding, I've got a callous, and he's looking at me like "good, good." Then he pointed down the hall, and the bowl itself was 70 pounds, I picked it up, walked it down, and threw it on the table, and he was like, "You stay?" I stayed for five months. I got lucky. That was the most magnificent display of teamwork that I've ever seen. At any given time somebody would be making cake, this guy would be making mousse, someone would be candying nuts or nougat. Then everyone would come to the table and he'd lay down fifty rings and fifty cakes would be built in thirty seconds. That started the tick for me.

Who inspires you today? My mother. She's a rock star. I am half the mom she is. She's a fucking badass. She just takes it like a champ in every way. My husband, Scott Parker, is my other inspiration, he's just sexy always. He doesn't even have to try, he just wakes up and he's hot. He makes me want to puke. He's such a good cook. It's the way he moves and how his hands are. He's making the lox for us.

What is your mission at Gather? Truthfully, to bring a return to pop-overs. People in this city don't even know what a pop-over is and they need to eat one because they're freaking delicious. They're high protein. You can cram a bunch of stuff in them and they're glorious. It's like a big, custardy, gorgeous, vessel, and they're just a marvel to watch bake. Also, I really want to highlight dollar top-shelf pastries. They'll be at the top shelf of the case and everything's a buck. Dollhouse desserts. Little cakes eventually. If I eat a cookie as big as my face, I'm going to feel as big as my face. I know everybody that's walking in here just isn't looking for that. My goal is to get everybody in this whole city not to say no. They all have to say yes. They will have no choice.

There is a man making bagels in your kitchen at Gather. Who is he? I met Josh Pollack the first day we opened and he's amazing. I really respect what he's doing. He's a sweetheart. The process of his craft is unique and interesting. He is planning on opening a bagel shop and he's going to kick ass once he gets his own space.

Do you share an oven right now? We do. I don't like to share - at all. But I'll share with Josh. I respect what he's doing. He's doing bagels old school, on the burlap, flipping onto stone. If I did the bagels, I'd slam them all on a sheet pan and call it a day. He's got a family recipe. He's even adding different elements to the water to replicate New York's water- it's pretty awesome. Usually, there's a big asshole in the way or an egotistical chef, but it's Josh and he's a free loving hippie, so we got along immediately. It's rough, it takes up four hours of my oven space in the morning when I desperately need it but it's him, so I'll take it any day of the week.

What can we expect from your team at Gather? Massive evolvement of city food. Like taking bagels to a whole different level. There are certain classics that need to be around in order to have a café or deli space but there are just certain things that need to be kicked up. Like our PB&J: we take brioche french toast, hand whipped cashew butter, and house made concord grape jelly. It's a very hand picked place, so it needs hand picked food. I want to do Pork-overs. Pop-overs stuffed with pork green chile. I'm really going to focus on the booze a lot. I'll make all the syrups, granitas, and sorbets to drop into the martinis - a modified ice cube. You can grab dessert, you can chill out, you can have a coffee from Ninety Plus that's badass. Truthfully, my biggest downfall right now is spring not being here. It's so boring in the winter: you can use bananas and citrus and that's it.

Do you have a favorite pastry place in Denver? There aren't any bakeries around here. Rheinlander's in Arvada, it's been there a long time, it's cute. The biggest faux pas with the whole scene here, is everyone uses pre-made shit. Even D Bar, even The Ritz Carlton. Especially the fruit fillings you see in every bakery-the apple Danish, the cherry Danish-it's all the same, gelatinized filling that comes from a bucket. It's gross. Make your own fucking filling, that's why I'm waiting until spring, I'm going to be patient. I have some tart pitted cherries frozen from Forte Farms, and I can use those. It's still not the same. It's not the same as a wild strawberry at the end of May.

If I told you I want to become a pastry chef, what would tell me? Go back to school. Go be a doctor. Be ready to work long hours. Be ready to have really shitty pay for about fifteen years. After all the long days and the shitty pay, I'm completely enthralled when I tie my apron. I still love every moment of what I do. There's nothing I'd rather do, ever. There's a certain movement and a certain dance in a kitchen and it just takes a long time to get there and once you find that, it's just elegance. It's a craft that evolves and is ever-changing. I think good foundation skills are important, people say skip culinary school but I wouldn't skip it. At least you find out the lingo and know what people are talking about.

What kind of hours do you work right now? We're open from 7-7 Monday thru Friday. I get in here anywhere from midnight to four in the morning, and I've been working 15 hours a day since we opened. That's average. 90 days is the threshold and then we'll figure a system. Right now it's chaos, but it always is. It doesn't matter how posh it is; it could be the Ritz Carlton and something will go wrong. I just hired an assistant who's going to do the night shift. Thank God. He wants to do it. I've done it for fifteen years, I'm done. I have a two year old and a five year old.

You work fifteen hours days and you look happy, like you're in a good place. That's true. It's because I love what I'm doing. Second reason is nine times out of ten, I don't want to go home because being a mom is way harder than this shit.