Share All sharing options for: Matthew Thompson of The Squeaky Bean on Life on the Sweet Side of the Kitchen

Welcome to The Sugar Files, where Eater uncovers and features the city's best pastry talent. In this edition, executive pastry chef Matthew Thompson of The Squeaky Bean, gets the spotlight. 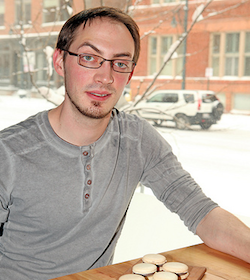 The dishes coming out of The Squeaky Bean kitchen under the care of head chef Max MacKissock are intricate, whimsical, and are grabbing the attention of Denver. The same goes for the desserts, which are just as well thought out and exciting as the savory menu.

Pastry chef Matthew Thompson executes a well-curated offering of four sweet selections nightly. If you're lucky enough to meet him at the chef's counter during an early dinner, you will get a sense of the passion, humility, and the love he has for his craft. 27–year-old Thompson, a Denver native, has been working in kitchens before he was old enough to get a work permit. He talks to Eater about the collaborative environment at The Squeaky Bean and how he arrived to the pastry world.

How did you get into cooking?
When I was twelve years old my step-mom used to do wedding cakes and I'd help her bake. Then my uncle gave me this gift certificate to Barnes and Noble and I bought Betty Crocker's Best of Baking. I started making cookies when I was really young. When I was thirteen years old, I was up in Vail and got a job at Blue Moon Bar and Grill. I've been cooking ever since.

Did you focus on pastry in school?
When I was in school I was the kind of kid that made fun of all the pastry students. I was a culinary student and felt like pastry wasn't really cooking and then I ended up falling into it and was like wow, this is a lot more difficult than I realized in the past. Max thinks that's where most of my talent lies.

How did you end up at The Squeaky Bean?
I went to culinary school in Chicago. When I came back to Denver I was supposed to get a job at Mizuna and ended up missing my interview because of a huge snowstorm. I went in the next day with Max at Vita and started working with him as a line cook. One day our pastry chef walked out. I told him I would step up and do it, and I've pretty much been with Max ever since. When he left Vita, I went up to the rigs in Utah and was cooking for all the roughnecks up there. When I came back into town Max called me up and offered me a job at The Bean and I've been here ever since.

What's your approach to pastry?
For me, it's the same as any kind of cooking, I like balance of flavor. I want it to be sweet, but not too sweet. I don't want it to be overwhelming to the guest. I don't want them to sit there and go this is good for the first couple bites, and then terrible for the last, or it's too sweet or something. It's all bout balance, I'm not going to have two chocolate dishes on there. I try not to repeat myself. There's no exact rhyme or reason to it, it's just what tastes good.

You have just four desserts on your menu, what is your menu writing process, how do you choose them?
We all work as a team. I'll have an idea and I'll make it for everybody, and then Max, Blake, myself, all the cooks will sit down and eat it and critique it. Everyday I come in and try something new. A lot of times it doesn't work, but sometimes it does, and that's what we go with.

There are a number of restaurants where there's a chef-owner that has too much control over the pastry program. Has it been a healthy relationship between you two, in that regard?
Definitely, I've been with Max forever, so it's easier to sit down and talk with him. I'm not afraid of him, I'm not worried about what he's going to say, I'm more striving for the critiques, hoping he'll say, I love this, but let's change this. I know the first time I make something it's not going to be perfect, if it is then I'm probably in the wrong business. I need to be able to grow and learn. That's helpful.

Is there anywhere you'd like to stage at?
Dana Cree, the pastry chef at Blackbird in Chicago is a very talented lady. There are so many places I'd love to go, but sometimes it's just not in the cards. I get a lot of opportunity to grow and learn here, I've got a lot of people pushing me. It's almost like learning from five different chefs rather than going and learning under one person. I get a lot of creative input from everybody here, so it's a lot more fun I think than working for somebody that's really strict and tight, like this is the way you're going to do it. This is my dream job.

Is there anything in particular you really love to make?
I like it all. I like working with chocolate. It's really scientific, but now I understand how it works. I think it's a creative outlet. Nine times out of ten I've got chocolate on my nose. I think making ice cream is delicious.

Are there any desserts you don't have an interest in?
Traditional pies and stuff like that. I don't mind making them for family, but as far as a restaurant scene goes, I don't want to make them. I need something more than just a piece of pie.

Are there any desserts in Denver that you really like?
I don't get out to eat all that much, but I really like The Wooden Spoon, I think they have some really delicious food. I think Deanna Scimio is a really talented pastry chef. That's pretty much all I've got.

What are you are envisioning for this season?
Right now I'm working on a beet dish, a take on a red-velvet cake with a goat cheese frosting and candied beet chips. We are going to incorporate some of our Spring items that are coming off the farm. Really it's trying to get back into the seasons, and make it delicious as possible.