Kate Kaufman of The Kitchen Denver on Their Downtown Location, Favorite Memories and An Evolving Menu

Share All sharing options for: Kate Kaufman of The Kitchen Denver on Their Downtown Location, Favorite Memories and An Evolving Menu 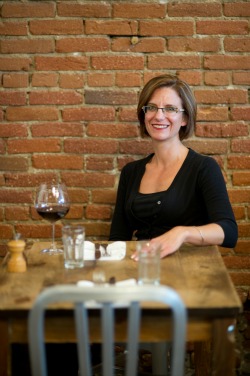 In March of 2012, the highly anticipated 4th restaurant via The Kitchen Community: The Kitchen Denver from chef/co-founders Hugo Matheson and Kimbal Musk opened in Denver's LoDo neighborhood. The 8,000 square-foot space, seats 160 people inside and 65 outside and it employs 115 people to keep the space running smoothly. Through their success and growth, Eater talked with general manager, Kate Kaufman about the last year, how it feels to be in Denver, her favorite memories of the Kitchen in Denver, and what you can expect from the restaurant in the future.

Do you recall the first week you opened? How did it go? I do remember it. It was wonderful and exhausting. I think looking back there are definitely things we would have done differently to make it smoother. Any restaurant of this size knows that there is no way to practice. And so there were some bumps but overall it was pretty incredible.

Over the last year were there any surprises? What about things you wish you might have changed? I don't know if there were any surprises. We knew obviously how big it was and that it would take a different mindset to run a floor this big especially with our kitchen that is not proportionately as big as it should be [laughter]. Our kitchen here is only one station bigger than Boulder's and Denver's restaurant itself is almost three times the size of Boulder's. So if we could change something, we would probably do that.

What is your favorite memory or milestone in the last year? Really the opening cocktail party where we had all the press and industry in. It was amazing to see that group of people gathered in the space. To see the space filled with people - it's such a beautiful canvas - to have it painted with all those people was amazing.

Has the menu grown or evolved over the last year? It has changed and it has changed to fit the space in that it's more interesting than the menu we started with. But it's simpler. There's a little heavier focus on appetizers and the raw bar is incredible. As far as how it has been received and what were able to get on that raw bar is amazing so that has been an even bigger focus than we anticipated.

What has been the most popular dish and beverage? The oysters. As far as entrees the chicken. And we've left the chicken on since the beginning. Drinks-wise my bartenders have been so seasonal that we have been flipping things enough there isn't one consistent drink that hits. Our beer list is so big and varied and small brewery focused but the cocktail program is way more popular than even I anticipated.

Do you still like your location? How was the space selected? Kimball and Hugo had been looking around all different neighborhoods in Denver. I think the space landed downtown because they wanted a lot of business - business people focused. They thought 16th Street would be great with all the local businesses around. It's such a fun neighborhood that there are so many cool people who live down here so we have that great mix of an urban neighborhood and a tight knit community that has welcomed us. That's so important to our focus to be part of the community where the restaurants are and not just plop in and hope everything works. We offer a nice place for lunch downtown and we get the neighborhood itself so we have our friends that live above us and across from us come in because we're their local spot.

Last time we spoke, you mentioned how you're blending The Kitchen Community's philosophy while also catering to Denver's desire for a more formal dining experience. Is that still the case for The Kitchen Denver? What else sets it apart from the other locations? I think it's our ability to entertain a larger group of people. We are starting to take the big business dinners and give them a place to show off to their clients as it's in a comfortable and elegant enough setting. It's much easier for us to do than Boulder. We have one room that is set really well for that and then the larger room for friends and neighbors coming in or those that are coming in for a drink and just off work. We're able to diversify and do the formal dining in some areas and still have a great happy hour in the bar with the high energy in the other space. It has been nice that we can hit all those scenes instead of being pigeon holed.

What can we expect from The Kitchen Denver in the future? We have a couple fun events coming up. Our sustainable seafood provider (Sea to Table) is an amazing organization. It's extremely direct. We call Sea to Table, they say what the fisherman brought in fresh that day and that they will send it right to you. It's a pretty incredible organization. We're doing a dinner with them on sustainable seafood coming up, so look for that. Then, we are having a big anniversary party - not on our anniversary - on May 7th. It's a big party similar to our opening party. We'll have 300-400 people come in and just share in the excitement of a first year. We're going to have it also be a fundraiser for our Kitchen Community.

We're always looking to make sure we're giving people what they're asking for. I would say something to be on the look out for is weekend days may bring in a little more brunch-focused items on the menu. We won't be serving brunch per say but we're going to start serving slightly more brunch oriented dishes on the weekend. There seems to be a big demand for that.

In general, it just feels amazing to be down here. The Denver community is really supporting us and we love that. It makes us feel good.

· A Look Inside The Kitchen Denver [EDen]

· All The Kitchen Denver Coverage [EDen]