On the House is Eater's column that goes behind the scenes of the restaurant business, written by the owners, operators, chefs and others who make our favorite establishments tick. Today, John Broening, chef, writer, and co-owner of Spuntino, asks: "Is housemade always better?" 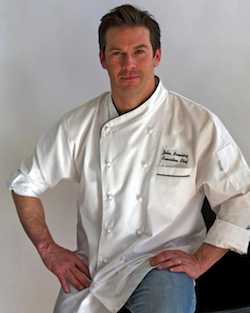 A while back I went to check out a colleague's restaurant. The guy was hardcore about everything. He was farm-to-table, but not in the fake way where you buy a few clamshells of local microgreens and call yourself farm-to-table. Absolutely everything he could buy local he did, not just pork but grassfed beef, rabbit, chicken three-times the price of Red Bird, produce and dairy. And not only did he buy local but he made everything in house: pasta, bread, charcuterie, sorbet, desserts- he even churned his own butter and made his own cheese.

There were two, at most three people in the kitchen at one time. This meant that what could have been a ten-hour day for him became a sixteen-hour day. Some of the food was great—he had a knack for a simple bowl of pasta and a seared hunk of animal protein with a pan sauce. But the rolls were pale, misshapen blobs of dough, the sorbet was icy and the duck prosciutto had picked up a distinct off flavor somewhere in the curing process. What's more, the chef seemed to be so exhausted by the strain of doing everything himself, that when he stopped by our table, he could barely string a coherent sentence together.

This got me thinking: is housemade always a good thing? As chefs, we have gone in the past forty years from one extreme to another: going from putting together our soups and sauces from powders and pastes, buying breads and desserts and tinned pâtés, to making everything in house; Hell, some of us are even grinding our own flour.

But consider the following truths about housemade:

It's almost never cheaper.
At Spuntino, I pay about $3.80 a pound for pork belly. I pay about $4.50 a pound for my sliced bacon. If I were to make my own bacon, it would cost me (accounting for seasoning and 20 percent shrinkage) about $4.70 a pound, even before you factor in buying new equipment, electricity, and labor. Remember also that that kitchen labor is already the biggest line item in your monthly P&L.

It's never as consistent as store-bought.
Your local bakery and the company that makes your bacon have the proper storage facilities and the proper equipment to do what they do. They also employ skilled artisans who have done nothing but make a handful of the same products year after year. Now contrast it with your average restaurant kitchen: not enough storage, inadequate equipment, never enough time. And up to a dozen people rotating through the same station every year.

Your customers might not be able to tell the difference.
I once catered a wedding for a couple who insisted on having Ranch and Thousand Island dressings for their salads. Rather than buy a few bottles of the stuff at the Safeway, I spent hours trying to duplicate their taste with dried dill weed, corn syrup, celery salt, etc. After the wedding, the happy bride came back to the kitchen, gushing, "You guys are so great! And Wishbone is my absolute favorite!"

You don't get points just for doing it-it has to be good.
This may same self-evident, but many of us are still stuck in the middle-school mindset where we expect praise for some wobbly vase we bring home from pottery class. Housemade should be synonymous with painstaking, haimiche and delicious, not weird and cack-handed.

The longer I am in this business, the less dogmatic I am about everything. Here are some case- by- case thoughts about housemade:

Bread.
I've almost never been to a restaurant that makes bread better than your average artisan bakery. Even in Vegas, where many restaurants are attached to hotels with casinos and have unlimited budgets, the bread is rarely better than okay. Housemade bread is usually sweet, dense and undercooked-what I think of as hippie bread. The ingredients of bread are cheap-flour and water. But it's labor- intensive and to produce good bread you need expensive deck ovens, huge mixers and walk-in coolers and lots of space. Bread-making is also a very specialized skill. In a commercial bakery, one guy mixes the bread, another guy shapes it and yet another guy works the ovens.

French fries.
Potatoes are rarely good more than nine months out of the year. When the starch in the potato has turned to sugar, they will produce limp greasy fries no matter what you do to them. Now consider frozen French fries: the potatoes for frozen fries are always harvested at the height of the season. Freezing also improves the texture of the French fry-it makes it crisper on the outside and fluffier on the inside.

Stocks.
My training is French and the top dog in the French kitchen, before you get to the sous, is the saucier. I love a good sauce made from a clear, rich stock, fortified with meat scraps, wine and spirits, enriched with butter or cream, brightened with a splash of vinegar, with the mouthfeel of a long-simmered stew.
But make sure you have the burner space for a stock, or the time to properly skim it, and make sure that some knucklehead prep cook doesn't crank up the burner and turn your stock a cloudy, greasy mess. Make sure as well that your purveyor always sends you gelatin-rich backs and necks and not breast bones which produce a thin, insipid stock.

Pickles, Chutneys, Jams, Vinegars, Flavored Oils.
Make these yourself, by all means. And the weirder, the better-maybe you want to take ketchup back to its Indonesian roots and create a version with bird chiles, star anise and sweet potato vinegar. But consider when you make jam that the industrial giants like Smuckers probably pay a tenth of what you do for their fruit.

Charcuterie and Salumi.
Good idea, but only if you can make it in a sanitary way, store it properly and rotate it regularly. There's nothing worse than a sour sausage or an oxidized pâté.

Fresh Pasta.
This is a case where you have some room to play with. The high markup on pasta dishes offsets the high labor needed to produce them. But before you go overboard with the fresh stuff, consider that Italians eat way more dry than fresh pasta, both at home and in restaurants. And remember than only 60 seconds separates a perfectly toothsome ravioli from Chef Boyardee.

Ice Cream and Sorbet.
Are you rotating out your ice creams every few days? Are you melting and respinning them twice a day, the way they do in France? And if not, do you know how to use stabilizers and invert sugars? If you don't get to do that, you might want to consider outsourcing this one.

Breakfast pastries.
If you do this yourself, you can use one ingredient that's rarely in commercial breakfast pastries-real butter. Also, there's nothing better than a scone or muffin fresh out of the oven.

Puff pastry.
I recently ate at a highly regarded, cutting edge local restaurant. We were served a dense, tough, vampire-pale millefeuille. They told us, as if it would make things better, that it was the pastry chef's day off. The best frozen puff pastries are made with real butter and are made with a dough sheeter. If you don't have one of these machines or a tyrannical, burnt out yet highly skilled French patissier in your kitchen, consider buying a good frozen puff pastry.

Sauces.
Look at the indigestible crap they put in commercial sauces: guar gum, xanthum gum, modified food starch, high fructose corn syrup. Not to mention garish food dyes, and stuff that leaves a nasty after-taste in your mouth like onion powder, garlic powder and cheese flavoring. Look at what's never in a commercial sauce and you will find a lot of the ingredients that make food taste good: fresh –squeezed lemon juice, fresh onion and shallots, hand-peeled and hand-minced garlic, fresh herbs. You can't even make a simple vinaigrette or aioli? Consider another profession.

Pre-breaded or frozen prepared foods items.
Breaded fish or chicken? Zucchini sticks? Jalapeno poppers? You are leaving the domain of the skilled chef and rapidly approaching Guy Fieri's Flavortown. Now you may say, I own a bar and no more that 20 percent of my revenue comes from food—and that's why I run a from-the-freezer-to-the-fryer menu. I want something that's low skill and low labor.However, even the bar scene is changing. Every week, it seems, somebody opens another gastropub, which is just a bar with more ambitious bar food. So maybe you want to reconsider that.

I've omitted one or two factors, maybe the most important ones: fun and pride. Doing it yourself is fun and there's nothing to get your young cooks more excited than letting them try to make their Kombucha or Soppressata or naturally fermented pickles. And without that personal touch, there's nothing to distinguish your kitchen from an Applebee's.