Local pranksters took the opportunity yesterday to pull some creative April Fools' Day jokes and hoaxes. Some fell for them, some called them out, but now that it is over, everyone can laugh about it.

Fans of Pearl Street Pub, an iconic dive bar in Boulder, were not particularly amused by the announcement posted on the bar's Facebook page yesterday morning. "Worst April Fools joke ever," posted a guest in the comments in response to the grim news.

"With heavy hearts, we regret to inform you that today is the last day of business for the Pearl Street Pub. Unfortunately we were not able to come to an agreement with our landlord on a new contract; the rent on this space has reached the point where it is impossible to provide the same level of service you have grown to expect. Rather than raise prices and cut corners, we have decided to close the doors. But that means one more awesome last night of revelry! The George Nelson Band will be playing at 10pm. Also, there will be a silent auction for The Buffalo. The auction will begin at 7 and end at midnight, with all money benefiting local charities."

Today, the post was removed and a new one confirmed that the bad news was just a prank.

Peeping out of a suitcase were a countless number of boxes of ...marshmallow Peeps. The Denver International Airport's Facebook page posted a picture of a suitcase packed with yellow Peeps and asked "Hey Peeps: Someone traveling over the holiday weekend left this bag unclaimed. We'd love to connect it with its owner. Please contact media@flydenver.com if this is yours." The post got nearly 200 likes and 65 shares on Facebook. One of the commenters advised the airport personnel to "report any suspicious looking peeps to airport security," while another one suggested contacting the Easter bunny. 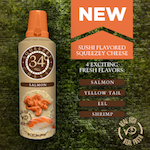 34 Degrees, a popular local company that focuses on making crackers, introduced a new line of products to its line-up via its Facebook page. The new offerings came in a can and were dubbed to be Sushi Flavored Squeezy Cheese that came in four different and exciting flavors - salmon, yellow tail, eel, and shrimp. The fishy spread appeared to be a complement to the crackers. Many called it out as a prank and the company confirmed that today.

Randy Layman, the bar manager at ACE, announced that his family will grow and that his two kids will soon have a sibling. While Facebook friends did not buy the announcement, the kids did. Layman and his wife, Taryn Kapronica, told their daughter that she was going to have another baby brother. The five year old was left to process the news for two minutes, then was told it was an April Fools prank. She cried for ten minutes. Oops. 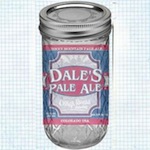 Oskar Blues announced yesterday on its website that for the first time they aim to turn craft beer on its ear by reinventing the glass bottle. The Longmont brewery that has made a commitment to canning all beer, says:

"As the debate of bottles vs. cans continues to heat up we had to look ourselves in the mirror and admit that drinking out of an open mouth pint glass is the best drinking experience for beer. For years we've been telling our customers to pour Dale's Pale Ale from the protective clutches of the can into a pint glass to fully enjoy the aroma of the beer.?. thus, the resealable 12 oz. "gap cap" bottle was born here at Oskar Blues." says Oskar Blues."

The post continues to describe the reasons behind the decision and explain the benefits but concludes with "Happy April Fool's Day y'all!"

If you have pranked or have been pranked in the Denver food world on April 1, share away in the comments below.

· April Fools Day Around the Country [EDen]
· Opening Day Prep: Where to Eat at Coors Field, Home of The Rockies [EDen]