Share All sharing options for: Steve Jankousky Asks: Is Service Holding Denver Back?

On the House is Eater's column that goes behind the scenes of the restaurant business, written by the owners, operators, chefs and others who make our favorite establishments tick. Today, Steve Jankousky of Tom's Home Cookin' , asks whether it is the quality of service in restaurants that keeps Denver from making it on national best of lists more often. 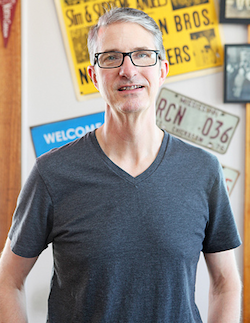 I was flipping through some magazines a few days ago. You know the kind: all the articles are Where to Eat Now, Where to Go Next, America's Hottest New Food City, and so on. Denver was not on there and it rarely seems to make it among the cities highlighted. What's up with that?

One magazine says Asheville, North Carolina has "a world-class food scene" based on three restaurants, two breweries, one cocktail lounge, a bakery, and a chocolate shop. Another magazine claims Nashville, Tennessee is Where To Go Next, listing a ramen shop, a taco joint, and a wood-fired pizza place. Denver has all of those and more!

It can't be the cooking that's keeping us from getting noticed. Denver has some very good cooking, great ingredients, interesting flavor combinations, and some beautiful plating in its many restaurants. Last year Atlanta was being written up as a new foodie mecca. Tom, my partner, and I ate at Empire State South, Miller Union, Flip Burger, and Restaurant Eugene- all of them very good restaurants, but the cooking was no better than what we could have had at any of a dozen different places here in Denver.

What is it then? Denver has chef-driven, chef-owned, locavore spots that have their own rooftop kitchen gardens. We've got small-craft brewers and small-batch distillers. We've got restaurants doing in-house butchery, meat-curing, cheese-making, and perhaps most importantly, we've got kale, baby, kale! It's the vegetable of the year, and I'm convinced that Denver has more kale per capita than any other city in the world! We've got baby kale, dinosaur kale, Tuscan kale, Etruscan kale, raw kale, cooked kale, braised kale, sauteed kale, kale chips, and kale krisps. It's very au courant. What the hell is it then, that makes the editors of all these national magazines consistently ignore Denver's vibrant restaurant scene?

Three recent dinners made me wonder if the answer to that question could possibly be...

Is it possible that the service in this town has not risen up to meet the level of the cooking? Have some in the service industry smoked so much medicine that they just can't focus on the details? Has our snowboarder culture of "it's all good, man" dulled our abilities to see things from the guest's perspective? Because, dudes and dudettes, it's not all good. Sometimes, it's just not very good at all.

Since the new year, Tom and I have been to three new chef-driven neighborhood bistros (the sort of place where the total check for our 2-top was between $200 and $300) where different elements early on in the service left me ambivalent about a return visit.

At the first place, we were seated at a table that was unstable. Not a fatal flaw to start out with - it was just what followed that made me uneasy. This was not a slight wobble that I could stop by putting my foot on the table base, but rather a full-blown rocking back and forth on the concrete floor, like Lindsay Lohan after a 3 day bender. The busboy actually set it rocking as he filled our water glasses. The server approached with our menus and I asked if he had one of those little plastic wedges to stabilize the table. He did not, but he returned with a wine cork. He futzed with the cork for a minute or two before giving up on that idea. He then got down on his hands and knees and began to wrestle the table into submission. After he knocked into my legs, I asked if he would like us to stand up to give him more room. "No," was the reply. This went on for quite some time. It was awkward at best. Other diners began to stare. Finally I pointed to an empty 2-top only six feet away from us and asked "Is it possible for us to just sit at that table?" To me, this seemed like a simple remedy that would give someone time to fix the offending table. But our server said,

"I'm afraid that is not an option at this point."

Really? You've been grunting around at my feet like a mudman digging for grubs for over five minutes trying to fix this damn table, and we can't go sit at that empty one six feet away? We haven't ordered anything, so it can't confuse the kitchen; we've only been given water and menus. Famed chef Charlie Trotter once said that good service was "just doing the obvious. It's just common sense." There wasn't a lot of common sense present at that moment, and although our server did eventually stabilize the table, and the food was good, I'm still shaking my head about the whole thing.

At the second bistro, we were seated, the server handed us menus, and he rushed off to talk to other tables. But no wine list. Hmmm. We like wine. Isn't it customary to leave a wine list along with the menus? About 15 minutes later, the server reappeared and we asked if we might see a wine list. "Of course," and he rushed off again. The wine steward appeared with the list, gave us a few minutes with it, returned, and we ordered wine. Another 5 minutes went by, the wine steward served our wine, and after some pleasantries, we found that we had been seated for half an hour, and the server still had not taken our food order. And there we sat.

Finally, our server buzzed by and blurted out "I'll be back in a few minutes to tell you about some of my favorites!" What? We had decided on what we would order minutes after receiving the menu. Almost 40 minutes after we had first been seated, our server reappeared to regale us with his favorite dishes. I listened politely through gritted teeth as he described in excruciating detail six, count 'em six, of the fifteen items on the menu as his favorite. Inside my head, I was shouting, "Come on- just take our order! We are ready and no longer open to hearing about your favorites are. Just take our order!"

Later, we concluded that the server liked the sound of his own voice way too much. There was an extraordinary amount of time spent talking about what he liked to every single table. No wonder we had been sitting there almost a full hour, had watched the couple next to us eat appetizers, entrees, and desserts, while we had still not even been given bread. Once the food arrived, it was tasty, but was it worth the wait??Sadly, no.

The third questionable dinner started off well enough. This bistro does not take reservations, so we arrived just after they unlocked the doors at five o'clock, like old people, eager to make it back home in time to see a rerun of "Matlock." We were the second table to be seated, and our server had only our table to attend to. She took our cocktail order. And we waited. We could see the bar. Two bartenders. Neither of them mixing drinks. We could see our server, standing ten feet from the bar, watching the bartenders not mixing our drinks.

Finally, our server came back to our table and announced that the machine which dispenses orders to the bar had been out of paper, but that she had figured it out and that our drinks would be ready in no time! We then saw our drinks being mixed and placed on the bar for pickup. Our server then walked right by our cocktails, came to the table, eager to take our order. I was eager to have my martini, which was now getting warm...on the bar. But we complied and ordered, and were eventually rewarded with our cocktails.

The server then brought our wine, and we found it a little "tight" and asked if she might decant it, thinking this might improve it a bit. She brought a decanter to our table, set it down, and to our amazement, completely inverted the bottle into the decanter, and stood there with her hands on her hips, watching the wine glug down into the carafe, as if she were watching a fraternity boy do a beer bong! With raised eyebrows, Tom and I looked at each other in disbelief. Were we being punked? I glanced around the dining room looking for a Candid Camera crew, and after the server left, I said, "Hang onto your hat. It's going to be a bumpy ride!"

And a bumpy ride it was. From plates arriving at the table without any knives and forks, to the end of the meal when I actually got out of my chair and went to the hostess stand to ask for two sugar cubes and spoons to go with our espressos, this was a memorable dining experience. For all the wrong reasons. And this bistro has already managed to land on at least one of Denver's Best New Restaurants lists.

If these service snafus are happening in Denver's best new restaurants, that could be why Denver's food scene seldom gets national attention. Great dining is not just about the food. The whole evening is an accumulation of small details. Maybe we need more training for our front of house staffs. When we hire people, maybe instead of asking Where have you worked? we should ask Where have you eaten? And what did you enjoy about the experience and what could have been better?" And I suppose if we can't improve our service, we could always just add more kale to the menu.