The French Press Breaks With Coffee: Denver Restaurants Use It for Soups and Cocktails

Share All sharing options for: The French Press Breaks With Coffee: Denver Restaurants Use It for Soups and Cocktails


The French press, a tool used to brew coffee, has found different applications at two of Denver's most popular restaurants - the Squeaky Bean and Trillium. The advantage of the French press is the quick steeping of flavors into liquid and that, apparently, can go beyond coffee. The Squeaky Bean uses this traditional coffee vessel for clear broths, while Trillium uses it to create bright cocktail flavors. 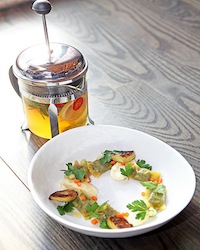 The Squeaky Bean uses the french press when the chefs want to impart acid or fresh herb flavor into a clear soup. "Adding either of these earlier and the flavors will dull or bitter," chef Max MacKissock says. "Pouring the soup over them at the last second ensures the flavors will be bright and upfront," he adds.

The French press has been used in two dishes at the restaurant. The first was the Pot au Pho, a combination of a traditional pot au feu dish crafted with seasonings typical in a classic Vietnamese pho. In the French press was a lime, thai basil, jalapeno, cilantro, and mint. When these flavors combined with the rich stock, the result is a well-balanced broth. While this dish was a hit, it is no longer on the menu, but, who knows, maybe an encore is possible.

The second utilization is with the kale agnolotti (pictured here), which was inspired by trying to make a vegetarian version of an Italian wedding soup. The broth is a vegetable stock made with leeks, fennel, artichokes, celery, and carrot. The other garnishes are goat ricotta gnudi, roasted baby artichokes, brunoise of celery and carrot. In the press is a lemon, fresno, basil, and rosemary. This dish is currently on the menu at the LoDo restaurant. 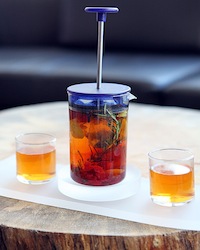 Under the guidance of beverage director and cocktail fanatic Parker Ramey, Trillium introduced the French press to cocktails since the beginning of winter this year.

The Ballpark restaurant uses small French presses to infuse the flavors of tea, spices, and berries into a cocktail, a process that happens tableside. A timer is set for optimal steeping- between 5 and 8 minutes depending on the cocktail. When the timer rings, a server filters the cocktail from its infusions and pours the cocktail into glasses. Currently, there are three French-pressed cocktails on the menu. Each of the three cocktails are served for two guests and will remain on the menu until the end of spring.

The French press cocktail program will take a break at the end of April to make room for summer-oriented concepts. "I'm already, however, looking forward to working on next winter's recipes," Parker Ramey confessed.