Share All sharing options for: Hogshead Brewery on 54 Imperial Gallons of Beer

Welcome to A Pint With, where Eater uncovers and features the city's most interesting beer-brewing talent. In this edition, brewer Stephen Kirby and operations manager Mike Manczur of Hogshead Brewery, get the spotlight. 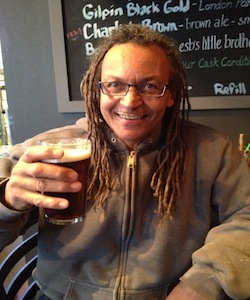 More often than not, craft breweries are owned by passionate dreamers, travelers and handyman types. They are at times inspired by ancient beer culture rooted in Europe and resourceful enough to manage a lot of complicated equipment. These individuals are excited about their craft and dedicate their days to malted barley.

Hogshead Brewery, one of Denver's newer small breweries in the Highlands, is no exception. The UK-born head brewer Stephen Kirby was a wandering traveler and brick mason who ended up in Denver in the early 1980s.

Kirby met Mike Manczur, a construction company owner, at the Highland Tavern, one of the few places in town to drink beer from the Czech Republic. They became friends and met over and over again at that tavern. Like most breweries, their to-be business Hogshead Brewery was conceptualized over pints. Steve and Mike decided that they would make cask-conditioned ale, a classic English-style of beer that is unpasteurized, unfiltered, and served out of a cask, or a barrel often called a firkin. "A hogshead is a large cask of liquid... in our case ale. It represents 54 imperial gallons of beer," Mike says describing the brewery's name.

With the help of the brewery's engineer and consultant Jeff Kipp, Steve and Mike invested in a one-barrel pilot brewery (a brewhouse that allows for brewers to make small-scale, experimental batches of beer) that they set up in the back of Mike's construction office at a chicken farm where they spent a year perfecting their recipes.

In 2011, the team invested again, this time in a 10-barrel brewhouse in an old gas station on 29th Avenue. This new brewery seamlessly fits into Denver's Highland neighborhood with its industrial yet intimate feel. Bright windows that span the front of the building make the small taproom seem larger than it really is.

"[Hogshead] is a place where people can come have a proper pint and meet someone in the neighborhood. It's inviting — we get the people to interact, talk and meet amongst themselves," says Mike.

And with beers like the spicy herbal Lake Lightning English Pale, the roasty Eurotrash black lager, and the semi-sweet Dread's Export Stout (named after Stephen's beloved dreadlocks), customers are probably going to stay for a while. The most popular beer at Hogshead is the Chin Wag ESB, or extra special bitter. This medium bodied, lightly acidic brew is sweet, and finishes "earthy, musky, spicy, damp-earth bitter with a light bite," according to Hogshead's assistant brewer Jake Gardner. "Other flavors include cooked fruit, plums, pears, brown sugar, light butterscotch, and dry biscuit," he says.

"After 3 Chin Wags you start loosening up and start talking shite," Mike jokes about the beer's name. "Your chin starts moving. It's a happy beer; it makes you want to talk," he adds.

There's a lot to talk about when it comes to Hogshead's beers. Cask ales, once popular in Britain about a century ago, are making a comeback in the American market. They aren't the typical ice-cold, carbonated beers many drinkers have come to expect at breweries. Instead, they are served at approximately 55 degrees Fahrenheit. Natural carbonation makes cask ale seem "flat" to someone who hasn't had it before; however the team at Hogshead will tell you that this lack of carbonation tends to bring out flavor subtleties and create smoother bodied beer.

When Wynkoop Brewing Company was founded in 1988, the head brewer Russell Schehrer coined the cheeky phrase "Warm and flat is where it's at" to promote the cask ale that the brewery had on tap. The folks at Hogshead, though, avoid using the words warm or flat to describe their beers.

"Stephen calls it perfect condition," says Mike. "Tiny little bubbles and that 50-degree temperature... that's when it tastes perfect. That's when everybody who comes in gets converted. You explain the difference, they have a pint and say, 'Oh this is a whole 'nother level.'"

Hogshead At A Glance