Share All sharing options for: Jen Bush of Lucky's Bakehouse on Getting Boulderites to Eat Sugar and More

Welcome to The Sugar Files, where Eater uncovers and features the city's best pastry talent. In this edition, executive pastry chef Jen Bush of Lucky's Bakehouse, gets the spotlight. 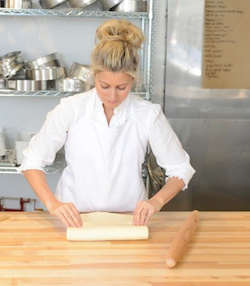 Jen Bush has had her hands in the pastry world for nearly two decades. She got her professional start in kitchens in San Francisco while studying at the California Culinary Academy. The Boulder native returned to her hometown and has worked for restaurateurs like Dave Query with whom she opened the much-loved and sadly defunct Blue Fine Pastries. She also owned a natural foods company, Ice Box Bakery, that sold slice and bake cookie dough at Whole Foods and Costco.

Jen is now the force behind Lucky's Bakehouse in Boulder, where she is the executive pastry chef. The shop, just six months old, is a sugarcoated wonder for the senses, offering confectionary works of art. The line-up includes black walnut financiers, coconut shag cake, almond croissants, and cheddar-bacon biscuits, as well as house-spun ice cream with classic flavors and unique ones like chocolate-curry and lavender-blueberry sorbet. Well-executed, gluten-free, and vegan items are also available. Jen talked to Eater about getting Boulderites to eat sugar and the highs and lows of baking in an open kitchen.

You have been doing pastry for a really long time, what has been your best job? I don't want to make anyone feel bad because I've worked for other people in town for a long time. I've been in the natural foods world with pastry and the restaurant end, so I've touched all forms of pastry, but this has definitely been the best. A lot of it is because of the store's support. I don't have to deal with the administrative stuff. I can just really focus on baking. One of the reasons I love the Bakehouse so much is because of this whole family I am involved with. I don't think I would have done it without them. I do think it's about the people, I really do- who you choose to work with, the support you feel. I told them from the beginning because I am a single mom, my kids are going to be in here a ton. It's nice to feel like they can just be in the kitchen after school.

In a town like Boulder that's annoyingly good at saying no to sweets, how do you make people say yes? People say yes themselves. I think Boulderites work so hard at keeping fit and being healthy that they allow themselves to indulge sometimes. They still really love sugar and decadent stuff. They just don't over-indulge in it. We have a fair amount of vegan, gluten-free, low-sugar stuff. We definitely try to keep that in mind, especially for kids. I have two little girls and so many of their friends are celiac and it's real. Years ago when I was baking, it wasn't around, and you didn't take it so seriously, but now I can see it in these kids, with breakouts and things like that. I want these kids to be able to have some good stuff.

Do you eat pastry outside of work? Not really outside of work, but I eat it a lot at work. When I go to innovative places, I always look at the menus. I've had some amazing pastry stuff in Denver, like at The Squeaky Bean. They have great pastries. It's fun, but I don't eat too much of it outside of work. My assistant pastry chef and I just did a half-marathon in Moab, we really try to run and keep fit.

You got really inspired to go into pastry by a trip to France years ago- was there a particular baked good or moment that really stands out for you? I think it was that first time just walking down a street in Paris. Just the storefront windows- the pastries just shine and sparkle, and it almost looks like a jewelry shop more than a pastry shop. You see pastries in a completely different light there. More artistry than just something to eat. I think that's when I just fell in love with it. Not even thinking that I'd really do it, but how beautiful they were.

You have quite an extensive line-up at Lucky's Bakehouse. What's not there that you'd love to offer? Because I come from more of a restaurant pastry chef background, I'd love to do plated desserts in the evenings. I just honestly have not found the time. I don't know if I ever will, but that's the direction I'd like to head, you have to have something to strive for.

Lucky's Market is planning to expand to other markets outside of Colorado, will they have this same kind of Bakehouse in other locations? They'll have little mini Bakehouses inside of them. The pastries won't be coming from here, but we'll train the people that are baking within them.

What is the best part of your job? The people. It's an open kitchen, so we can actually engage with the customers too, it's awesome. Usually you're in the back in these little kitchens. It's such a bonus to be able to watch people enjoying what you're making, it just makes you feel fulfilled.

What is the hardest part? The open kitchen. Because you can have sugar going on the stove, and a lot of things going on, and people come in and you want to engage with them, you don't want to be rude. Also, it's really, really physically labor intensive, you're here from four in the morning until late afternoon sometimes. The big challenge, and I think everyone in here would agree, is the physical aspect of it. It's just tiring.

What is your favorite thing to make? Cakes. I like to really push the creative envelope.

What's your least favorite thing to make? Bread. I don't like doing bread. It's hard in Colorado. We don't do bread, we get our bread from Udi's. Bread is it's own thing and I just leave that to people with way more skill than I have.

If you were going to make a career change, what would be your dream job? I've always thought it would be fun to do a cookbook or really have time to do a blog. There's all these amazing bloggers, half of my ideas are pulled from amazing people blogging about pastries. I'd love to have time to interact with that a little more. When you're in the thick of it, and I'm a single mom with two kids, I'm just fried half the time.