"Let's say it, these are the Oscars of the restaurant world," Maguy Le Coze of Le Bernadin said in her speech at the James Beard Foundation Awards last night at the Lincoln Center. Colorado is bringing home two of those restaurant Oscars. Two Colorado finalists were representing- the wine team led by Bobby Stuckey at Frasca Food and Wine, nominated for Outstanding Wine Service, and chef Jennifer Jasinski of Rioja, nominated for Best Chef Southwest. First Frasca Food and Wine and not much later chef Jasinski heard their names called as winners in their respective categories.

"First of all, Danette, happy anniversary" said Bobby Stuckey, master sommelier and co-owner of Frasca Food and Wine, as he took the podium to accept the award. His wife Danette was in the audience. Stuckey was accompanied to the stage by sommeliers Matthew Mathers, Frasca's wine director who has been at the restaurant since opening day, and Carlin Karr, who was recently named among the 50 Eater Young Guns finalists.

Stuckey thanked his staff and his friend and business partner, chef Lachlan MacKinnon Patterson for their support and gave a shout to Thomas Keller as well as Frasca's loyal guests. "For every guest in Boulder, Colorado who drinks a glass of Tocaj with us," Stuckey said pointing to the silver medal.

This year marked the fourth consecutive year for the restaurant to be a finalist in this category. A little superstitious, Stuckey looked at lucky number 13 for good mojo - it was his 13th wedding anniversary, one of his accompanying chef's birthdays is on the 13th, and his run earlier in the day was a fitting 13 miles. The team celebrated the victory at Marea with a variety of wines that could make any wine lover jealous, including a Chablis Premier Cru "La Forest" from famed wine producer Dauvissat and a magnum of Champagne Krug from 1981. 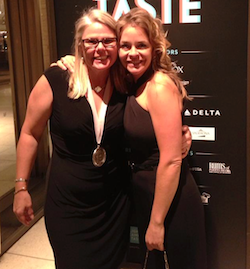 Chef Jennifer Jasinski of Rioja arrived at the podium in awe and among the first thing out she said was "Wow, I'm really happily surprised. Holy crap!" Jasinski who along with her business partner Beth Gruitch owns restaurants Bistro Vendome and Euclid Hall, thanked John Imbergamo, her PR and restaurant consultant first. "You can't do anything without this guy," Jasinski said of her friend and consultant nicknamed by the chef "il consigliere." He was credited for always keeping her in line.

Jasinski also recognized her staff, a group of dedicated professionals that have made Rioja successful for the last nine years, her business partner Beth, and her husband Max MacKissock, the chef of the Squeaky Bean. This was the second consecutive year when Jasinski was a finalist in this category. The Rioja team celebrated the award at Minetta Tavern, an 85 seat bistro located in Greenwich Village. Earlier in the day, the team enjoyed lunch at Maialino and breakfast at Balthazar.

For a complete list of winners from last night's awards, go to Eater National.