Grand Cochon, the last hurrah of the Aspen FOOD & WINE Classic, overwhelmed guests and participants last night with a spread of pork and drinks like no other. Grand Cochon, is the finale of the fifth national tour of Cochon 555, a traveling culinary competition created to promote sustainable farming of heritage breed pigs and responsible agriculture. More than 1,200 pounds of pork were served to about 400 guests at last night's bash.

The ten chefs who won regional rounds competed for the title of Queen or King of Porc in a heated battle judged by the guests on one side and a panel of 20 well-regarded industry professionals including Andrew Zimmern, Michael Voltaggio, Claudine Pepin, and Jason Vincent. The meat, the booze, and the shenanigans of this giant pig-out are detailed below in photos and hangover observations.

The quantity and selection of food and drink was overwhelming even to the hardcore glutton. On top of over 30 pork dishes cooked by the ten competing chefs, there was a giant cheese spread from Cured in Boulder, an oyster shucking station from Rappahannock River Oysters, and the Tar Tare Bar. On the booze side, the choices were rich: there was the "Perfect Manhattan" Bourbon Bar, the Chuptio Bar – a mezcal tasting featuring Mezcales de Leyenda, an Anchor Brewing table, tastings by Crispin Ciders, Fredrick Wildman's Pig's Nose Scotch, Ilegal Mezcal, cocktails using Templeton Rye, Fernet Branca, Antico Carpano, alongside samples from wineries including Jordan Winery, Robert Kacher Selections, Sandhi Wines, Wind Gap Wines, and McCrea Cellars.

Kelly Liken of Kelly Liken Restaurant in Vail pondered the wisdom of her judging strategy. Apparently after finishing entry number 6, Liken was full enough to think she was close to the finish line. "Someone should write something about how these things are judged," Liken said. 30 pork dishes in less than two hours is hardcore work according to this chef.

Three days of festivities at Aspen FOOD & WINE did not seem to affect the many chefs and food personalities that attended the event. Spotted among the guests were Johnny Iuzzini, Dorie Greenspan, David Burke, and Hugh Acheson. Iuzzini got stickered with a Isabella & Sons logo, Greenspan declared the pork boner from RN74 the best dish of the day, and Acheson was ready for a variety of antics that included jumping into the arms of Empire State South chef Ryan Smith.

Mike Isabella was perhaps the chef who had the most fun at the party. The former Top Chef contestant plastered guests famous or not with Isabella & Sons stickers, some unassumingly placed on people's backs with a friendly pat, others carefully applied on the front of shirts, with what at least one lady called an accidental grope to the chest. By the time the winner was announced, Isabella displayed some signs of blissful intoxication on stage.

Colorado was well-represented at Grand Cochon with many chefs and industry folks among the guests. A whole crew from The Kitchen was in attendance, Mclain Hodges of Fuel Cafe and Mary Wright of Old Major were boozing it up, and former Top Chef winner Hosea Rosenberg was happily enjoying the event as a civilian. Chef Kelly Whitaker from Basta arrived with his wife and friends and reminisced about the coolness of being able to pair fried chicken with a '75 Dom Perignon for one of the events at the festival. Will and Coral Frischkorn of Cured were serving cheese, chef Bill Greenwood of Beano's Cabin was show-butchering a hog sporting a Tender Belly t-shirt, while chef Kelly Liken was hopeful to find new inspiration for vegetable dishes in the Nobu Vegetables cookbook. 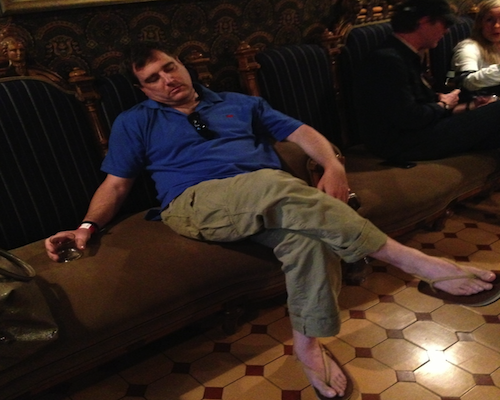 By the end of the festivities, folks were napping in food and booze-induced comas wherever they could.