As part of the Food & Wine Classic in Aspen, the Eater team hosted several chefs for interviews at the Eater Lounge at the Limelight Hotel.

Andrew Zimmern shared his thoughts on trendy meats and named goat the next big thing. While enjoying a couple of pieces of Mount Baum, a cake that came from Denver bakery Glaze, Zimmern declared Pittsburgh the next big food city and added that he always refers people in search of a good restaurant to El Taco de Mexico. 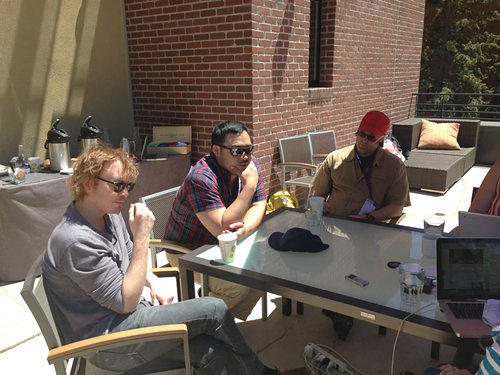 Three for one is what Eater got when Grant Achatz of Alinea brought along David Chang of Momofuku and Wylie Dufresne of WD50. The three power chefs talked about critics, opportunities and endorsements, and the tyranny of tasting menus. Highlights included Dufresne mentioning that the night before the chefs travelled inside the trunk of a car and Chang declaring he ended up at the interview because of affirmative action. For his part, Achatz wondered out loud whether a critic who mostly likes pasta, like John Mariani, is the right person for the public to listen to for restaurant advice.

Chef Daniel Boulud was congratulated on his upcoming nuptials- coming up next week- and was questioned about his new cookbook, part of the celebration of 20th anniversary of his flagship restaurant Daniel. Boulud unofficially officially confirmed his plans for expansion in Washington, D.C. and shared thoughts on a project he recently collaborated on - a whisky.

José Andrés spoke about restaurant design and why choosing the right person to create a space is important. Andrés discussed the expansion of Oyamel and, against the will of his PR guy, hinted at his plans to bring his food to a country South of the United States.

The editor-in-chief of FOOD & WINE Magazine, Dana Cowin stopped by to chat about the evolution and change of food over the last quarter of a century. Cowin pointed out that twenty some years ago the chefs we looked up to focused on highly-elevated French cuisine while now we celebrate Chinese noodles and food trucks. She sees the evolution as a great opportunity to learn. 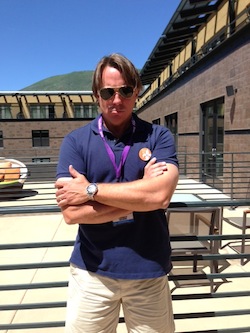 The Eater Lounge was also visited by FOOD & WINE Magazine's Best New Chef Jamie Malone of Sea Change in Minneapolis who talked about the importance of critics, Drew Nieporent who talked about the difficulty of opening restaurants in NYC, and John Besh who chatted about his new book. Eric Ripert of Le Bernadin confided that his new art book has a very sexual side and Erik Anderson of Catbird Seat talked about chef collaborations.

Head on over to Eater National for the complete interviews with the chefs mentioned above and more Aspen FOOD & WINE coverage.

· Max MacKissock of the Squeaky Bean on Poaching Eggs and Waking Up Naked by the Pool [EDen]
· Andrew Zimmern on Opening in Airports, Not Being a Pharmashill, and Why Pittsburgh is the Next Big Thing [EN]
· Daniel Boulud on DBGB in DC and His New Cookbook [EDen]
· José Andrés on Oyamel, America Eats, and Design [EN]
· Dana Cowin on 25 Years of Best New Chefs and the 'Democratization of Amazing Food' [EN]
· Drew Nieporent on Critics, the Difficulty of Opening in NYC, and the 6 Degrees of Drew [EN]
· Power Trio Grant Achatz, David Chang & Wylie Dufresne [EN]
· John Besh on His Upcoming Project With Aarón Sanchez, Johnny Sanchez's [EN]
· Jamie Malone on Seafood in Minnesota and the Importance of Critics [EN]
· Erik Anderson on Changes at Catbird Seat and Collaborating with Other Chefs [EN]
· Eric Ripert on Aldo Sohm Wine Bar and Culinary Schools [EN]
· More Aspen FOOD & WINE Coverage [EN]