Elizabeth Mackey of Devil's Food on Pastry Pet Peeves, What She Craves When Not at Work, and More

Share All sharing options for: Elizabeth Mackey of Devil's Food on Pastry Pet Peeves, What She Craves When Not at Work, and More

Welcome to The Sugar Files, where Eater uncovers and features the city's best pastry talent. In this edition, executive pastry chef Elizabeth Mackey of Devil's Food, gets the spotlight. 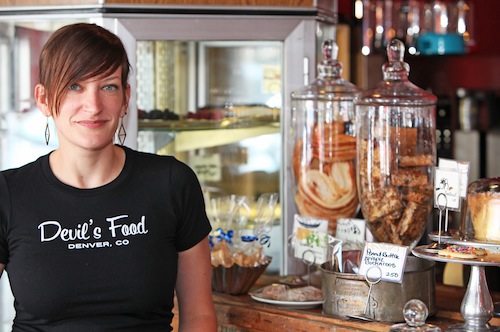 Elizabeth Mackey entered the Denver pastry world only a few years back, but she has quickly made an impact on the Mile High City. An English major in college, this Indiana native worked as a teacher in Europe. A cold winter in Prague led her to bake and she was hooked. She came to Denver in 2009 to attend the Johnson and Wales Pastry Arts program. In 2011, Elizabeth won two blue ribbons at the inaugural edition of the Denver County Fair. After a stint at The House of Commons, a teahouse in the Highlands neighborhood, she landed as head pastry chef at Devil's Food- the bakery and breakfast institution in Washington Park, which has grown over the years to serve lunch and dinner.

Elizabeth has been with Devil's Food just shy of six months and is already producing some of Denver's most exciting desserts. The current spring menu offers her take on a strawberry-rhubarb pie, featuring a rhubarb mousse, strawberry gelee, and a pretzel crust. Elizabeth talks to Eater about what she craves when she's off the clock and why she never wanted to work in a restaurant.

What has been your biggest pastry accomplishment? This spring menu coming out. I put a lot of thought and planning into it. When it was printed out and it said- "Pastry Chef: Elizabeth Mackey"- I was just proud. Plated desserts was something I didn't really see myself doing. I didn't ever really want to work in a restaurant. I more saw myself working in a small bakery, cranking out stuff. But I actually really enjoy working in the restaurant. I love seeing everything going on and all these different people. I feel like Devil's Food is a really good fit for me, the whole ambience- the homey, Pinteresty look of it - I like that.

Why didn't you want to work in a restaurant? I had always imagined working in a restaurant would be very stressful, fast-paced, competitive, and that the head chef would most likely be an egotistical dick that treated you like you were an idiot. I had heard enough real-life stories from people who had worked in restaurants. Had I started out doing this in my 20's, I think I could've handled it, but I'm in my 30's and I don't want to have to handle it. I will not be treated like I'm an idiot, or shouted at, or go to work to feel stressed out and not have fun. I thought working in a small bakery would somehow rule out a lot of that stuff. The thing that it so awesome about Devil's Food is that I absolutely have fun every day. I get along very well with the head chef Brian Crow, who perhaps is too humble, or too big-hearted to realize he is talented enough to actually act like one of those dicky chefs. So basically, it's about the right fit for me and Devil's Food is a very good fit for where I'm at in my pastry career.

How did you get into pastry? When I was in middle school I would bake all the time because I just love to eat sweet things. I studied abroad in Germany my senior year of college and that's where I realized that bread was delicious. There were all these pastries that I had never had before. I fell in love with eating amazing stuff in Europe. My husband and I lived and taught English in Prague for three years. While I was living there is when it became something I really wanted to do as a career. In Prague, the days are very short and cold, so I would bake just to have something to do and to keep warm. I really loved it and thought why couldn't I do this as my job? That's when I decided to go to culinary school.

What is your favorite part of your job? I love the people here. I love the culture of this restaurant. That I get to have the freedom to make whatever I want. There's certain things that I have to make, but I love that it's me doing the stuff. People come in, and they eat it, and it makes their day. That's just really cool.

Do you have any pastry pet peeves? I've said before that I want to punch cupcakes in the face. They are still really freaking trendy. I'm not going to lie, I love a good cupcake, but it has to be a good cupcake. I think that there are a lot of places that don't do good cupcakes. People gravitate towards them because they're trendy, and I guess cheaper than a plated dessert, or a $4.50 fruit tart. I think they are annoying, with gobs of frosting, and the cake is dry, and they look really awesome but don't taste good. I'm blaming cupcakes. It's not just cupcakes. I'm probably jealous of the cupcake people because they're making a lot of money. The real pet peeve is when something has this great wow-factor of how it looks or is described, but when you eat it it's not actually good.

Do you have any favorite places in Denver for pastries? You know I'm still kind of searching for that one place. I've been to places- and I don't want to name any- where I've expected such amazing things, it's been so talked about, and I've been like, yeah, it's alright. It's funny, as a pastry chef you don't make a lot of money, and to be going out to all these restaurants in Denver to try these desserts, you have to have a lot of money. I probably have a list of thirty places that I still have to go to and try their desserts. That's why I can't name a place.

What's on your list? The Kitchen, Root Down, Duo, The Squeaky Bean, Colt and Gray...just to name a few.

Do you eat a lot of pastry when you are not at work? Yes. On the weekends when I'm off, I'm always thinking I'd really like to have a Danish with my coffee from Devil's Food or a croissant from some French bakery. I crave breakfast pastries. When I'm here and it's around me, I'll nibble on things here and there, but when I'm away from the whole milieu of food and pastry is when I really want something.

Is there a particular city you want to eat pastry in? I would love to go to Vienna and Budapest because I love their cafe culture. They have this thing called coffee klatch, it means coffee and gossip. Viennese people go out in the afternoon just to have a piece of cake, and delicious coffee, and they just talk and gossip. It's just part of what they do and I love that. I wish Denver had a better coffee culture. I love the whole idea of it being not something special, or a once in awhile thing, but that pastries and coffee should be this delight you can have everyday. That it can be part of your life.

· Jen Bush of Lucky's Bakehouse on Getting Boulderites to Eat Sugar and More [EDen]
· Matthew Thompson of The Squeaky Bean on Life on the Sweet Side of the Kitchen [EDen]
· Deanna Scimio: Life as a Sugar Call Girl [EDen]
· Pastry Chef Christopher Jordan On Macarons, Denver's Pastry Scene [EDen]