A 27 year old Arizona native, Carlin Karr, is on her second sommelier job, working as the Assistant Wine Director at Frasca Food and Wine in Boulder, a restaurant that just won the James Beard Award for Outstanding Wine Service.

A 2008 graduate of the University of Colorado in Boulder, Karr had no experience in the hospitality industry when she decided to pursue an education and career in culinary arts in San Francisco. After her first wine class, Karr felt like she found her calling. She was introduced to Matt McNamara and Teague Moriarity who were getting ready to open a restaurant. They took a chance on the driven but inexperienced Karr and hired her as General Manager and Wine Director of Sons & Daughters, a restaurant that opened in the spring of 2010 and quickly earned a Michelin star the following year.

In 2011, Carlin Karr was recognized by Forbes Magazine representing the Food and Beverage Industry's "30 Under 30" as one of the brightest upcoming stars under the age of 30. A year ago, Karr joined the Frasca wine team led by master sommelier Bobby Stuckey. Last month, on her first attempt, she passed the Advanced Exam given by the Court of Master Sommeliers.

Karr's mentor and boss, co-owner of Frasca Food and Wine and master sommelier Bobby Stuckey submitted this letter to the selection committee supporting the young sommelier. 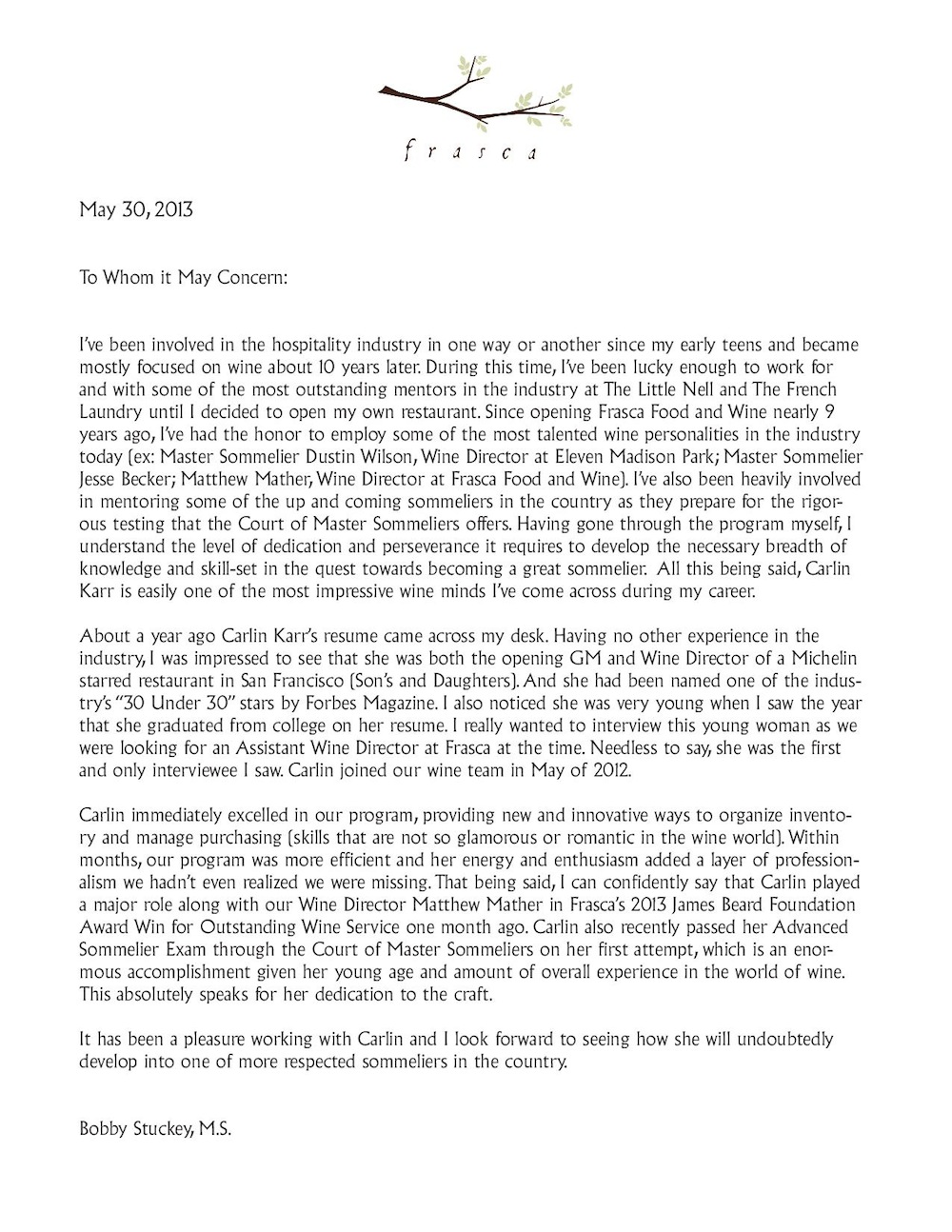 What do some of the most prominent minds of the wine industry think of Carlin Karr? Rajat Parr, master sommelier and wine director for the Michael Mina Restaurant Group said: "I think Carlin is one of the most passionate and hard working young sommeliers out there. Her knowledge and service skills are at the highest level in the sommelier world."

Boulder Wine Merchant owner and master sommelier Brett Zimmerman added: "Carlin Karr is one of the finest talents in the sommelier community today.  She exhibits polish and finesse in a dining room with skills and education to satisfy even the most demanding of customers in a humble and professional manner.  One of Carlin's greatest assets is her ability to run a balanced, profitable wine program - a commodity in today's challenging restaurant business."

Frasca alum, master sommelier and wine specialist for Winebow Jesse Becker also lauded Karr's wine talent: "Carlin possesses a freakish talent for the sommelier craft and combines it with an innate sense of hospitality. What's really scary is that she's only been at this for a couple of years and yet presents wine with grace, poise and context."