Share All sharing options for: Chef Matt Selby of the Denver FIVE and Corner House on His Passion for Baseball

Of course there are bios for each chef on the group's website and other bits on their careers floating around the web, but Eater wanted to bring you something you could not find quite that easily: five things you don't know about the Denver FIVE. Today, chef Matt Selby of Corner House, an avid baseball fan, shares his passion for the all American sport. 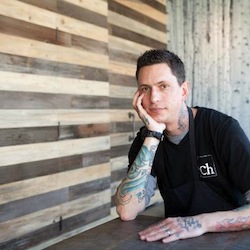 I've been a baseball fan all my life it seems. I may have gotten a little annoyed and disenchanted over the years with steroids and strikes, but the love has always been there. I credit my uncle Dana, a huge baseball for passing that love to me.

I played ball through high school and then some college ball. Even now, most summers I find myself playing in some sort of competitive baseball or softball league. I haven't played much this summer what with Corner House being so new, but I look forward to getting back into it stronger next summer.

Any Denver kid my age is allowed to love any team they want. Everyone should remember that we didn't get major league baseball until 20 years ago. That being said, my grandmother and grandfather are both from New York, so loving the Yankees is in my blood. I'm not a forgiving Yankees fan though - I'm a very harsh critic of them in terms of their payroll and some of their "star" players. On the other hand, Denver finally getting a team while I was still a teenager was like a dream come true and it still seems like that. My kids will never know how it feels to be major league baseball deprived. So, as with all our local professional teams, I am a die hard Rockies fan, more so that the other teams. Basketball, football, and hockey season are just buying time until baseball season starts.

Finally, I can't say enough about growing up a Denver Bears and Denver Zephyrs fan. My mom worked as a cocktail waitress at Zang's when I was a kid. Zang's was the Denver Bears hang out. I got to hang out with the club before and after games! At one point, I had a team ball, that featured some pretty impressive players on it that were simply passing through the Expos farm system.

My kids are definitely baseball fans. Our two oldest both played softball and our youngest is turning into a hell of a hitter. I taught our oldest how to throw a curve ball a while ago and it was pretty wicked! We love going to and watching games whenever we can and play ball often as well. There is a downside of sharing your passion with your kids: when you are the one who teaches them how to throw and catch inevitably they'll take a baseball to the face, that YOU threw it. It's horrible and gut wrenching, but part of learning the game. I've gotten the two oldest taken care of on that front. Now I dread the youngest girl's turn - it's a rite of passage in our family.