Share All sharing options for: Chef Sean Yontz of the Denver FIVE Dishes On Family Food Traditions and Menudo

Of course there are bios for each chef on the group's website and other bits on their careers floating around the web, but Eater wanted to bring you something you could not find quite that easily: five things you don't know about the Denver FIVE. Today, chef Sean Yontz formerly of El Diablo talks about growing up in a family that valued home-cooking and dining together. 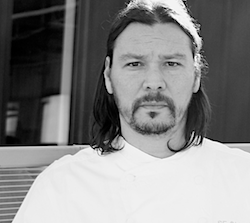 As long as I can remember food was always a very important part of our family. My mother was a very good cook and my father insisted that my brother and I ate - or at least tried - everything that was served. We were always expected at the dinner table to eat as a family. My mom was fearless and always tried new recipes... things like wok stir fry, fondu and others, but what I really enjoyed was the traditional Mexican dishes, the times she'd make red chile tongue, tostadas, carnitas and fresh flour tortillas. My favorite was albondigas with refried beans. It was not all great- she used to make this slow roasted beef with zucchini that was awful- that was the one dish that I did not like.

Every Sunday we had a huge family meal at my grandmother's house. My grandmother would start cooking a huge pot of menudo on Saturday night and there was enough food for anyone who wanted to visit. Her recipe was very traditional with tripe, broth, hominy, cilantro, onions, and Mexican oregano. It made me appreciate traditional Mexican food. I don't share the recipe with my family today because they don't seem to enjoy it much - maybe you need to grow up with it. For me, it is definitely a comfort food and I use the exact same recipe as my grandmother's every time I make it.

Occasionally, we went out to dinner as a family. Trying different restaurants was a special treat and my father made sure that we understood the food we ate. If he took us to a little taqueria, he would explain what they were known for and what was the best thing to order. If it was a fine dining restaurant, he would nudge us toward lobster or steak. Those memories and that approach always stuck with both my brother and I.

One thing led to another and by the time I was 16, I started working in restaurants. After making my way from dishwasher to line cook, I was working in this little French place and decided that if I was going to make food my profession, I needed to cook in the best restaurant in Denver. That is why I applied at the original Rattlesnake Club. I was hired on as a cook in the grill room. I eventually got my brother a job there and he ended up at Zenith, which was upstairs from Rattlesnake Club, working for Kevin Taylor. It's been many years and I am still happiest when I am around food.