The END: One Last Bash and the Justice League of Street Food Will Be No More

Share All sharing options for: The END: One Last Bash and the Justice League of Street Food Will Be No More

It is the end of an era: after four summers and many street food parties, the Justice League of Street Food is disbanding with one last bash set for Saturday, August 3. The party will take place from 3 to 10 p.m. in RiNo at TAXI (3507 Ringsby Court) where the group held several of its events in the past.

The Justice League of Street Food formed in the summer of 2010 with the goal of organizing street food parties together. It began with Steuben's Josh Wolkon recognizing Denver's appetite for food trucks. With Portland as an inspiration for street food setups and several friends owning such businesses- Pinche Tacos, the Biscuit Bus, Biker Jim's, and the Cupcake Truck- the group was formed and the mission stated: "saving Denver, one mobile meal at a time." Jim Pittenger of Biker Jim's came up with the name and Delores Tronco, formerly of Steuben's and ACE, became the chief organizer. Social media was used to announce locations, special features, or new guest trucks and the group quickly built a cult-like following. 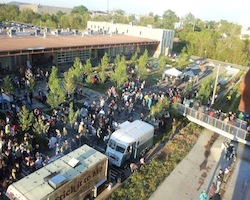 But all good things come to an end. Over the last few years, food trucks integrated into the Denver's regular landscape as opposed to being a trending novelty. There are countless options now and several permanent locations for regular food truck gatherings so the need for a party declined. The original members of the group became busier and their fearless ringleader, Delores Tronco, is about to open her own restaurant- Work & Class. So the decision was made: one last bash to remember and the Justice League members go their separate ways.

Mark your calendars for Saturday, August 3 and be sure to attend. Who will be there? Most of the original members (that are still in business)- Biker Jim, Pinche Tacos, the Cupcake Truck, the Biscuit Bus, and Steuben's. The more recent addition to the group, Quiero Arepas, a Venezuelan-inspired truck featuring a variety of dishes based on the traditional arepa, and a couple of guest trucks yet to be announced.

Aside from the wide-variety of food, the party will feature live DJ music, Avery beer, and Republic Tequila margaritas. Biking to the event is encouraged.