Share All sharing options for: Chef Ian Kleinman of the Inventing Room on Building Food Memories

Of course there are bios for each chef on the group's website and other bits on their careers floating around the web, but Eater wanted to bring you something you could not find quite that easily: five things you don't know about the Denver FIVE. Today, chef Ian Kleinman of the Inventing Room talks about building memories through food and becoming a chef because of his father. 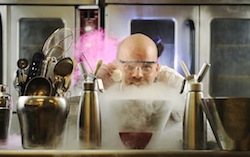 My dad has been a huge influence in my culinary life. Every time I picture him in my mind, it is always in his chef coat with his name and his title embroidered on his chest. My father starting building culinary memories with me at a very young age. I was fearless, I would try anything that he would cook. My favorite meal at the age of 7 was frog legs and escargot. As a kid, we always had pasta drying on poles in the pantry and jars and jars of dill pickles ready to eat. I know I was spoiled. He worked incredibly long hours in the restaurants that he owned and hotels that he managed. To see him and spend time together, I would prep, bus tables, or do dishes in his restaurants.

I started cooking for him in a small restaurant called the Gold Pan when I was 12. It was a one man line that offered mainly breakfast items and Mexican food. There was a small window to the prep kitchen and the walk-in from the line. I used to stand back in the prep kitchen and bust out as much prep in between the orders from my dad yelling for more shredded cheese. It is one of the best memories of my life.

When I was 14 years old he put me on a fine dinning line at one of the hotel restaurants at the Village at Breckenridge where he was the chef. It created my work ethic and exposed to me all aspects of the industry. After high school, I attended the Culinary Institute of Art were my father taught. I did not take a class from him because I did not want the other students to think he gave me special treatment, but just having him in the building inspired me. He got me my first hotel job at the Westin Downtown were I was able to work on one of the best lines in the city at that point. I don't know what I would be doing with out my father's influence. I am am a chef because of him. I guess it all goes back to creating memories for me. I can tell you the top five meals I have ever had, the people that I was with, the drinks I had that night. Some of my best memories have been created around food and I feel blessed my dad gave me the skills to cook for other people.

Now I have kids of my own and I hope I am building memories for them. I think they believe every dad has a tank of liquid nitrogen in the kitchen that can whip up a root beer float with exploding whipped cream. My oldest, who is 12, is helping me with the Library Program this summer, maybe another chef in the making.