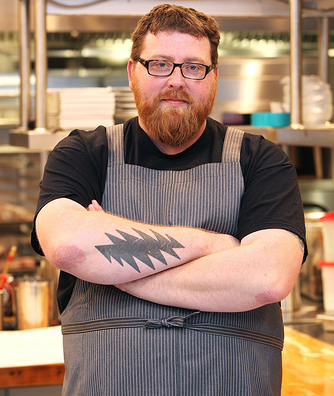 It was supposed to be a casual late night drink at Highland Tavern for Old Major's Justin Brunson, but the chef and owner of the popular LoHi eatery ended up in the hospital with a concussion and stitches. One of Brunson's line cooks was more severely injured, leading hospital staff to put him into a temporary medical-induced coma. He is currently in stable condition and on his way to recovery, with medical issues still to be addressed.

Exactly what happened varies with the person telling the story, but this is certain: after drinks at Highland Tavern, there was a physical altercation on the street right at 34th and Navajo between cooks from Old Major and another group of strangers. As a result of that fight, members of Old Major's kitchen staff were injured and taken to the hospital. One person was taken by the police in handcuffs.

A bartender from Highland Tavern, who was working that night, recounted that Brunson and two other cooks from his kitchen came in for late night drinks after their dinner shift. One of the two cooks is somewhat of a regular at the Tavern where he actually used to work. This line cook returned to Highland Tavern after the fight, around 1:45 a.m. and closed out his tab.

The bartender waited on the Old Major crew and said that the guys had a few drinks and were just hanging out sometime after 1 a.m. While he confirmed that the physical altercation took place outside, he recounted that "it all started with some verbal stuff inside" involving some people he had seen before in the bar as well as one "big stalky guy" who he had never seen before.

For his part, Brunson said there was nothing that happened inside and his only companion was one guy from his kitchen, the one who later ended up in the hospital. "We were just at the wrong place at the wrong time and we got jumped," Brunson contended. "Nothing happened inside. The people who assaulted us were never inside. When we came outside, we just got jumped. Honestly, I don't remember much- most of what I remember is from what others told me. I blacked out and when I started to talk after the fight, I thought it was January. I started to understand it was July at some point in the ambulance," he added. "What I know is that those people got arrested- the police came and they got arrested," Brunson concluded.

The Denver Police Department, through spokesman Sonny Jackson, shared some details with Eater. Jackson said there was a fight outside the bar and multiple parties were involved, both male and female. Jackson added that one person was assaulted and knocked unconscious to the ground. The police identified and took into custody one suspect in the assault. While the male was taken away in handcuffs, he was not formally arrested at that time or later. No one else was arrested, but the investigation remains open. The police record in this investigation was made at 1:24 a.m.

The Highland Tavern is a popular late-night hang-out for restaurant industry people. The owner of the bar said that a fight inside the bar has not taken place in several years. Brunson said he is not a regular at the Tavern. "It was my first night going out with someone from my kitchen in a long time. I work - all the time. I never go out," he shared. "The worst part of this whole thing is what happened to my line cook. We work very long hours together and we are like a family, so seeing him in such bad shape has been terrible," Brunson added.

The crew at Old Major is rallying behind the injured cook who does not have health insurance and whose medical bills will likely be very high. "In the next couple of weeks, Old Major will be hosting a series of events to benefit the cook who was injured on Friday, July 12th after being assaulted while trying to break up a late night fight and suffered severe injuries. The team at Old Major wants to help him and his family in any way possible during his recovery. Details about the events will be available shortly," a statement from Dana Pluss Parks, PR rep for Old Major read.