Late Night on Fridays, Denver Diner Is Just an American Slice of Normal on Colfax

Share All sharing options for: Late Night on Fridays, Denver Diner Is Just an American Slice of Normal on Colfax

"I don't believe in tipping. I don't tip because society says I have to. All right, if someone deserves a tip, if they really put forth an effort, I'll give them something a little something extra. But this tipping automatically, it's for the birds. As far as I'm concerned, they're just doing their job." Mr. Pink in Reservoir Dogs 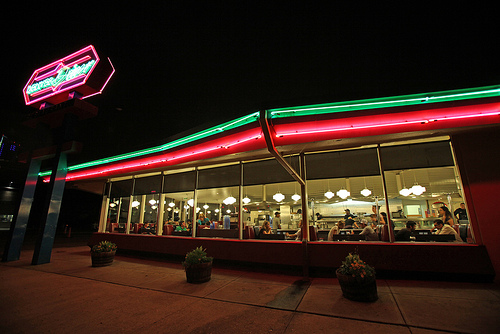 It's a quintessential diner scene, complete with the superimposed Elvis Prestley, James Dean, Marilyn Monroe, and Humphrey Bogart sharing the space. America has an obsession with diners and Denver loves the diner scene just as much. Depending on your level of intoxication, memorable movies scenes – a soon-to-be robbery, assassination attempt, or a fake orgasm – for a hot second, seem possible late night on Colfax at Denver Diner.

A normal Friday night on Colfax is a contradiction in terms. It always makes for an interesting show, deviating far from the description of normal. No matter the pockets of trouble dotted along the intersection of Speer and Colfax, the Denver Diner remains a neon beacon of consistency, a safe base of sorts, a bit of normal along the eclectic street boasting bar crawls, cruising vehicles, fast-food joints, and cabarets.

An exterior layer of stainless steel, green and pink neon piping along the gutters, nostalgic décor splashed inside, and brutal florescent lights hang overhead, chasing away any remnants of intimate candlelight. That's not to say Denver Diner isn't intimate; in fact, it's quite the opposite. Posted on red vinyl barstool, an exhausted workman decompresses from work, quietly indulging in his private pie. Situated in the booth behind him is a group of four college-aged young men in bro-tanks, sharing their manly gossip about the numbers newly acquired. Behind them is a married couple sharing a chocolate shake while holding hands over the table. In the corner up against the glass wall, a woman perches her head on the heel of her hand and delves into her novel. And with each table, the perky server bounces from table, maintaining the same smile be it a large food order or just a cheap cup of coffee.

If the people aren't entertaining enough, there is a complimentary light show. The red and blue emergency lights from the fire trucks entering-and-exiting the Denver Fire Department flash through the Denver diner windows and ricochet off glass tiles and metal panels. To an unsuspecting outside observer, this would be seemingly eerie. To the regular, this is part of the normal, and the volume level doesn't change in the slightest.

The clock turns 11 o'clock at night; it's early for Denver Diner. "I just started my shift," the server answers to the normal inquiry of how the night has been. The matriarch pipes up from the pick-up window, "You know we have the best graveyard crew! The Denver Diner Babies!" The staff camaraderie is apparent. Shifting as one unit, ever-so-efficient, spreading like a blanket, adjusting to the mood of each table to either entertain or invisibly attend.

Breakfast is served all day. The menu is expansive – par for the diner course. "I always go for the Denver Omelet and a side of pancakes – I crave the cheese," suggests a regular. Another said to opt for the Huevos Rancheros, taking full advantage of the mountainous green chili. The hashbrowns overwhelm the plate, ready to sop up any all grease and liquids juicing out from the eggs and meat. And there's the bouquet of pie slices prominently displayed at the counter by the entrance. Rumor has it the sunrise view from a booth is a treasure, as long as your eyes can stay open and there's enough caffeine between your hands.

I'll have what she's having.

[Oh, and disregard what Mr. Pink said in Reservoir Dogs and tip.]