Welcome to the Club Sandwich Power Hour: Here's What Local Writers Think of the Classic

Share All sharing options for: Welcome to the Club Sandwich Power Hour: Here's What Local Writers Think of the Classic

Welcome to the Club Sandwich Power Hour. In the next 60 minutes, Eater will share with you some tidbits on America's signature sandwich one that is as comforting as it is elegant, simple and intricate, an old-school dish that remains dear in many people's hearts. Eater asked friends in the food writing world to share some thoughts on the sandwich. 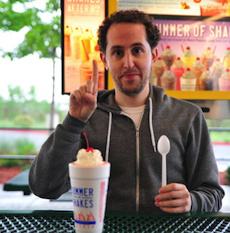 Lee Breslouer of Thrillist shared this: "Bacon and the Jews have a complicated relationship. Since I'm a human being in addition to being a Jew (!!), I can't deny that I enjoy the smell of bacon, but there's some deep-seated guilt inside of me saying I should not do things like eat sandwiches containing it. And since my mom might read this, I can't say that I've ever had a club sandwich. "

Eater's own Emily Hutto gave away her go-to. "My favorite club sandwich is one that represents Denver's culinary style of reinventing classics. The Sassafras fried green tomato sandwich is a fresh spin on the club sandwich. It intensifies the flavored of standard BLT-- the fried green tomatoes impart smokiness and the fresh goat cheese gives it a creamy, savory kick."

Denver Post restaurant reviewer Bill Porter is a fan of the sandwich. "I've loved club sandwiches since I was a kid. There was a restaurant called the Chuck Wagon near our house. It was shaped like a big Conestoga wagon and offered several varieties of club sandwiches, including a burger version -- the No. 3 Club -- that I ate every time I went there. Today I'm a classicist, although I often ask that the kitchen hold the middle slice of toast -- who needs that much bread? The Rackhouse Pub on South Kalamath does a nice one: turkey, bacon, avocado, lettuce, tomato and mayo on garlic toast. They also include a fried egg, but I have them substitute a slice of Swiss for the cackleberry. Gotta have the cheese. The Ship Tavern in the Brown Palace does a good one, too. The trick is to not use bread that's too thick. Texas toast has ruined many an otherwise fine club sandwich.

5280 Magazine restaurant critic Stacey Brugeman said this about the BLT, a sister-sandwich of the classic Club: "BLTs are such a summertime classic--I only eat them during tomato season! Just last week I made some for a family hike using whole wheat sandwich bread from Denver Bread Company; Denver Bacon Co's peachwood-smoked bacon; frisée; yellow, orange, and purple heirloom tomatoes; and gobs of mayonnaise. I can't think of anything I would have rather devoured at 11,000 feet."

"I don't think I've ever had a club sandwich in Denver, but one of my favorite comedians, Mitch Hedberg (RIP), had a great joke about them," Ruth Tobias of Denveater said. Then she shared the joke.


"I order the club sandwich all the time, but I'm not even a member, man! I don't know how I get away with it.
"I like my sandwiches with three pieces of bread."
"So do I."
"Well let's form a club then."
"Okay, but we need some more stipulations."
"Yes we do. Instead of cutting the sandwich once, let's cut it again."
"Yes, four triangles. And we will position them into a circle. And in the middle we will dump chips."
"Or potato salad."
"Okay. Lemme ask you a question: how do you feel about frilly toothpicks?"
"I'm for 'em!"
"Well this club is formed. Spread the word on menus nationwide!"

"A proper club sandwich is basically a BLT plus turkey, and an extra layer of bread- toasted, Doug Brown of the Denver Post shared. "I haven't had a club sandwich in probably a decade. It's a good sandwich, but for whatever reason I never get it. A BLT - only in summer, of course, with juicy tomatoes and garden lettuce and excellent bacon and maybe even homemade mayonnaise - is a perfect sandwich. It may be my favorite sandwich, and it is only worth eating for a few months in the summer and early fall. With a club, I think the turkey detracts from the sandwich, as does that extra slice of bread. The turkey will likely be lunch meat turkey, which is repulsive, but even home-roasted turkey breast, sliced thin and piled between the bread slices with the BLT components is a lesser sandwich than the simple BLT," Brown added.