Welcome to The Sugar Files, where Eater uncovers and features the city's best pastry talent. In this edition, executive pastry chef Eric Dale of Rioja, gets the spotlight. 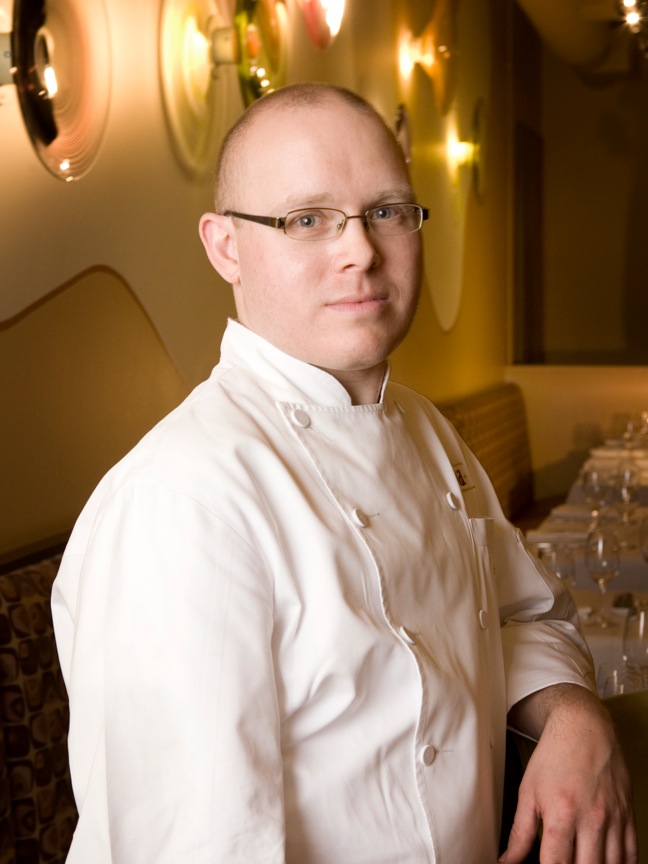 Executive pastry chef Eric Dale runs the pastry programs for three unique venues- Rioja, Euclid Hall, and Bistro Vendome. He joined the team at Rioja three months after its opening upon graduating with honors from Johnson & Wales Baking & Pastry program in 2004. He spends most of his time working downstairs at Euclid Hall where the bulk of the pastry preparations happen. Between batches of French macarons and rosemary goat cheese biscuits, Eric is checking in liquor orders or helping a server find a bottle of wine.

This is a pastry chef who is not afraid to get outside his department and say, tile the floor or break down a whole lamb. He is also a pastry chef who posseses an incredible amount of passion and devotion to his craft. Whether he is walking by a store window or biking ten miles to work from his house in Lakewood, Eric is constantly seeing things that inspire him for a new dessert creation. Eric talks to Eater about what it's like to work for chef Jennifer Jasinski, cheesecake, and Johnny Iuzinni.

How do you conceptualize your desserts? I will remember something from my childhood. The s'mores pot de crème at Euclid Hall is a remembrance of my childhood, going camping, having smores by the campfire. I'll think of the flavors and then create a dessert around that. Or, I'll walk by a cookbook or a magazine and see a color and I'll try to create a dessert that tastes like what that color reminds me of. I'll see a poster in a store window and think, what would that taste like if that was a dessert. I tend to use all senses when I'm creating. I'll see a rose and say, I want to make a dessert that tastes like that rose smells.

While you were in culinary school you did an internship at the Stanley Hotel, did you see any ghosts there? I didn't. I heard of a couple experiences, but we have a ghost at Rioja and I've seen her.

What is the story? Apparently her name is Amelia and every once in a while I'll see an apparition out of the corner of my eye. I've heard a woman calling my name when there's no one in the restaurant. When I used to open by myself I could hear footsteps on the floor above me, with the building locked and sealed. It was a speakeasy and she was a singer at the speakeasy who married the owner. Their daughter started dating a man that her husband didn't like and he had a contract put out on him. When the contract was executed, the man was killed and Amelia's daughter was killed at the same time. She was standing in Rioja when she found out her daughter had been killed.

Chef Jennifer Jasinski has won a lot of awards and her food is some of the best in the country. What is it like to be a pastry chef for a chef like that? It's actually amazing. I am just honored and privileged to be a part of the team. A lot of people think that when you get so many awards that you really don't have time for anyone, but she is an inspiration. She is more of a teacher and a mom. She's like your favorite aunt growing up. I'll bring ideas to her and she'll either like them or suggests new ones. Every once in a while she'll ask me a question about a pastry and I'll be like wow, chef Jen is asking me! It just blows me away that she trusts me so much that I can create desserts that pair well with her style of food.

Are there any pastry chefs you would like to work with? I would love to work with Sherry Yard from Spago, she's amazing. Johnny Iuzzini is so creative and cutting edge, I know I could learn new techniques from molecular gastronomy geared toward pastry and the way he plans a new dessert from concept to creation. It doesn't hurt that he is pretty to look at.

What is your favorite thing to make? By far it's cheesecake. It was my very first thing I learned how to make. I bought a cookbook and followed the recipe exactly. Mixing each egg for ten seconds, and scraping the bowl, and then ten seconds more, and baking for four hours at 200 degrees. Letting it sit in the oven for an hour, and then with the door open, and then on top of the oven. It was like a nine-hour cheesecake, and it turned out perfect, no cracks. After that, I fell in love. It's still one of my absolute favorite things to make.

What places do you love in Denver for pastry? There are so many. I love The Squeaky Bean - Matt over there does a great job. Anything Yasmin at Spuntino does, I just think she's amazing. Those are my two favorites. Anytime we go out, I usually try a few desserts.

What do you look for on pastry menus when you're out to eat? Chocolate cake. That is my go-to. If someone has a good chocolate cake, I'm a fan for life. Anything with fresh seasonal fruit I love. Peaches are my absolute favorite fruits. Anything on a menu with peaches I will order. I usually order three or four desserts. I love sugar.

What do you find disappointing when you order a dessert? If they say it's homemade, but it's not. I was at a restaurant a while ago and the server told me they have the best homemade chocolate cake in town, and being a chocolate cake fan I said, I got to get that, it's got to be mine. It came out and the buttercream was grainy and crystalized, and it still had a manufacturers label stuck to the bottom of it. I was like, what are you doing? You told me it was homemade and there's a sticker on the bottom of it. I was in Seattle recently and went to one of the most touted bakeries and all of the desserts that friends and I ordered had that day-old, refrigerator flavor. That's disappointing. If it looks amazing, but doesn't taste as good as it looks.

How do you stay healthy with all the sugar in your life? I try and ride my bike at least 20 miles a day. A couple of years ago I did my first century, a 100-mile bike ride. I would love to do the triple bi-pass bike ride over three mountain passes in one day. I love to ride my bike and I love yoga.

What is your advice to new or aspiring pastry chefs? One, learn how to paint a wall. I have been blessed to work for chef Jen who understands the importance of dessert, but at a lot of restaurants, when times get tough and budgets get cut, pastry is one of the first departments to get downsized. I've done painting at Rioja, I've re-wired blenders, I've done some tiling. Just make yourself indispensable. Also, taste anything and everything you can- whether it's savory, sweet, fruit, veggies, try it and file it away in your memory so you may come back to it in the future. In culinary school I tried a kumquat and wasn't sure I'd ever like it or use it again. Then, we were doing a cheese plate at Rioja and chef Jen wanted to use some kind of citrus fruit. I was like, oh I know, kumquats. I was able to bring back this memory. Once they were paired with the cheese it was perfect. And just learn anything and everything. I had chef Jen teach me how to break down a salmon, to butcher a lamb, and debone a chicken- which I do at home now.

· Elizabeth Mackey of Devil's Food on Pastry Pet Peeves, What She Craves When She's Not at Work, and More [EDen]
· Matthew Thompson of The Squeaky Bean on Life on the Sweet Side of the Kitchen [EDen]
· Deanna Scimio: Life as a Sugar Call Girl [EDen]
· Pastry Chef Christopher Jordan On Macarons, Denver's Pastry Scene [EDen]
· 'Superjobs':Why You Work More, Enjoy Is Less [WSJ]