Share All sharing options for: Chef Jorel Pierce of Euclid Hall and the Denver FIVE Talks About How He Fell in Love With Food and His Wife

Of course there are bios for each chef on the group's website and other bits on their careers floating around the web, but Eater wanted to bring you something you could not find quite that easily: five things you don't know about the Denver FIVE. Today, chef Jorel Pierce of Euclid Hall, who had a short-lived appearance on Top Chef Seattle, gets personal and talks about how he fell in love with food and his wife Lindsey. 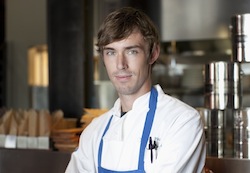 After six months becoming a freshman at the University of Northern Colorado where I pursued a degree in psychology, I met my wife, Lindsey. I asked a dorm friend to "find me a nice girl." That friend delivered and the next decade was written. As I fell in love with Lindsey over the coming months, I made the decision to pursue one of my other loves, food.

I had been a food fanatic for as long as I can remember, eating at Sushi Den when it was only Toshi [Kizaki, one of the two owners] and a server named Daniel. My family had always hunted and foraged so my exposure to real food and cooking has been a very important piece of my life. I remember growing up with Kael, my little brother, being the "chef" of the family. The competitive person that I am always took this as somewhat of a test; show them you can cook too!

After working random kitchen jobs as a kid and through college I decided to drop the psychology thing and hone my craft and passion?cooking. The period of time between realizing my future was in the kitchen and actually getting there has been a ten year journey into the history and artistry of cuisine: I put myself through culinary school at Johnson and Wales and then shipped off to England to work for one of the best in the bizz, chef Raymond Blanc.

When I returned to the States - tired, pale, and broke- I sought out the best kitchen job Denver had to offer. As it turns out, my stage at Rioja under chef Jennifer Jasinski has turned into a great eight year partnership where lessons are learned and taught everyday and the focus on development and creativity is like something out of a young culinarean's fairytale.

The last three years of my life have been some of the most rewarding of my life, ownership in the business I work in, a couple of appreciated recognitions and nominations, and the sort humble pride that will keep any tradesman or artist passionate about what they do. Lindsey, Gizmo (our little Persian cat) and I couldn't be happier. Thanks Denver for making it so easy to love you and love being a part of you. I've lived here my whole life and have never felt like more of a native than I do now.