Twelve Months In, Ace Is Rocking Harder Than Ever

Share All sharing options for: Twelve Months In, Ace Is Rocking Harder Than Ever 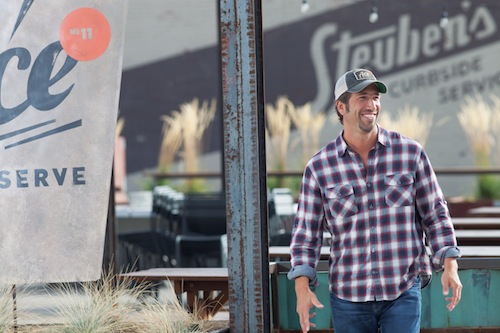 Ace Owner Josh Wolkon before the restaurant opened [Photo: Courtesy of Ace]
A year ago today, Josh Wolkon and his team opened the doors to Ace, an eatery, bar, and ping pong hall in Uptown. It has been a wild roller coaster ride for the restaurateur who also owns Steuben's (next door to Ace) and Vesta Dipping Grill, the 16 year-old LoDo restaurant.

The large space that used to house Storz garage has been transformed with able help from Xan Creative. With a variety of recycled and reused materials, including Chinese shipping containers, old barn wood, and weathered picket fence material, the remodel was a success recognized not just by the public but also by receiving a Mayor's Design Award. Ace is popular: on week-ends, the joint serves over 500 people every night. That volume of people was the hardest thing to adjust to for Josh Wolkon who chatted with Eater about the opening, evolution, ups and downs of his newest restaurant venture.

Ace came online fairly fast after Steuben's, considering the nine year age difference between Vesta and Steuben's, how long had you planned this eatery and ping pong hall? In the 5th year of Steuben's and 14th year of Vesta we realized that we had developed an incredible team of veteran leaders and up and coming all-stars that we were ready for another challenge. Vesta and Steuben's were operating well and, as a group, we were yearning for another creative outlet and opportunity to learn and bring something new to Denver. After eyeing the former Stortz Garage space for years, a fortuitous combination of meeting the right people at the right time and excitement around the idea of a ping pong hall quickly moved things into high gear. In an unexpected way, the creation of the Justice League of Street Food helped lay the foundation of Ace. Once the decision was made to move forward with the concept, the process itself took over 2 years, from negotiating the lease to a major renovation project full of surprises, to menu development and training. By the end, it became pretty long-term project.

Why Asian food and why ping-pong? We chose Asian food because it is one of our favorite foods to eat and we felt we were filling a need in the Uptown neighborhood. Trips to San Francisco, Chicago, New York City, Portland, Boston, and Thailand confirmed our love for the cuisine. We saw a trend of new and different interpretations of ethnic cuisines throughout the country. We felt confident that our regular clientele was willing to try new things and broaden their palates. The style of Ace's menu keeps the price point and accessibility similar to Steuben's.

The square footage and open space challenged us to figure out a concept to complement the dining room, bar and patio that was both affordable and fun. We also wanted it to be flexible so this space could double as an event space when needed. As we started talking about the idea of table tennis to friends, you could see how quickly they would get excited and energized. They would tell stories of their youth and brag of how great they were at the game. This tied into one of our company's missions to stimulate memories and emotions. We have always tried to create experiences and we believe that guests truly want more from their dining dollar. Adding recreational fun and a forced break from our media addictions were all compelling reasons to bring more table tennis options to Denver.

We took a couple of trips to New York City to visit a couple of ping pong bars while researching Asian food. Each night was more fun than the previous. Table tennis has no barrier to entry. Anybody can play from kids to senior citizens. If you watch people play, you are sure to see a ton of smiles, laughing, and excitement.The fact that the tables could be easily moved was an additional great selling point to the concept.

How exactly was Ace planned from the time the idea first came to you until you executed? Early on in the design process we committed to reusing as much of the original building materials as possible. We also wanted to keep the character of the building which was also a design direction we held true to at Vesta and Steuben's. Working with XAN Creativeour design process continued to evolve. We bought a 40 foot shipping container, salvaged airplane parts, old train boxcar flooring, and tons of other found objects. We travelled to Thailand together and returned with more culinary inspirations and design components. The Layman brothers researched, created, and tested house made syrups and sodas and fine-tuned the direction of the bar program with Asian-inspired cocktails and beer. On a weekly basis, we had lunch as a team at Vesta tasting and testing Ace menu items. We worked hard to create the Ace brand and identity. 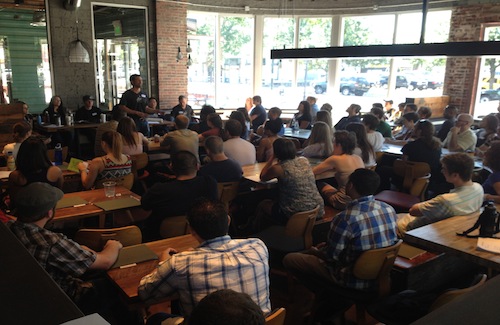 What do you remember from the first week of being in business? How was it finally opening the doors?The first week of business was a bit of a blurr. It was a combination of excitement, adrenaline, relief, stress, exhaustion and learning on the fly. While we knew there was anticipation of the concept, none of us could have imagined or properly prepared for how many guests would come to visit us in the first week. We knew on paper that the space was large and could accommodate a lot of people, but it was quite different to try to service 500 people at once or more than 1500 people in a day. We were overwhelmed, but definitely psyched.

You had your fare share of surprises after opening - what was the most positive one? The overwhelming excitement and support of what we had created. Ace is very unique and we were not 100% sure how people would react to the concept. We hosted over ten thousand people in the first week alone. There was a tangible excitement and energy amongst staff and guests that exceeded our wildest expectations.

What about the hardest one to deal with? Our biggest surprise after opening was challenge of managing the sheer volume of guests while also learning how to manage and operate the table tennis aspect. On the fly, we had to create systems and rules for enjoying table tennis at Ace and educate our staff on clientele on how to best enjoy Ace. We had successful experience in high volume restaurants, but Ace proved to be another level of volume that we had to learn. We also had to figure out how to manage the three very different aspects of Ace as a single venue. Ace is a restaurant, a bar and a ping-pong hall. Because of this, Ace attracts a wide variety of guests, looking for various types of experiences. Managing all three at once can be tricky. 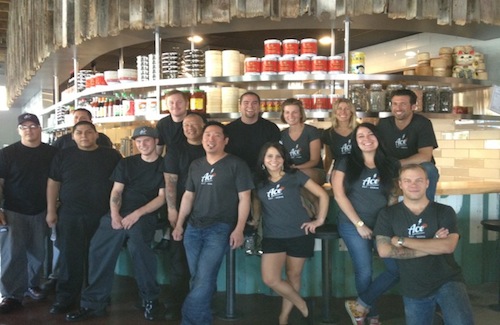 What was the best thing that happened at ACE in the last 12 months?It is difficult to pin-point the best thing that has happened...everything from the tremendous amount of excitement we have seen about the Ace concept to our amazing staff, many of who have been with us since day one. We have hosted ping-pong tournaments, live music, fundraisers, corporate events, birthday parties and DJs. Maybe seeing the diversity and the energy of the space has been the best thing that has happened at Ace so far. We also love to see guests return specifically for the food and juice bar. It's been great to see the kitchen find its groove. Developing regulars and repeat guests is the best sign that we are on the right track.

If you were to start over now, what would you change about Ace? While practice runs and friends and family nights are a great way to get ready for the real thing, we could have used some test runs with about 1000 more friends and family to prepare us for what was to come.

How did ACE evolve in the last 12 months? We have tried to hold true to many of the dishes and flavors that we really loved on the opening Ace menu, but we have added at least ten new items that have become new signature items. The lunch menu has been changed to offer more lunch entrees vs. the small plates and sharing concept that proved better for dinner. While we offered the fresh juices from day one, we listened to guests who felt their was a need for Juice Bar to be open in Denver earlier in the day, so we started opening the Ace Juice bar at 8 a.m. on weekdays. We have also expanded our catering operation to handle the flood of large party and event requests. Vesta is 16 years old and is still evolving and improving. This is vital to longevity and success. We will continue to listen to our guests and grow and improve Ace accordingly.

What makes you proud when you think about Ace? Our staff is amazing. Not many experiences rival that of opening a restaurant, and the bond that forms between an opening crew is amazing. In a very short time we have developed so many regulars and still see so many new faces every day. Ace won a Mayor's Design Award and we are very proud of the how the design, food, bar program, table tennis and patio all work together to create a very memorable guest experience.
· Eater Scenes: ACE Is Hot On Friday Nights [EDen]
· The Juice Bar at ACE Is Ready to Roll [EDen]
· Exclusive: Inside Steuben's Monster Ping Pong Eatery Ace [EDen]