On the House is Eater's column that goes behind the scenes of the restaurant business, written by the owners, operators, chefs and others in the hospitality industry who make our favorite establishments tick. Today, chef Paul Reilly of Beast + Bottle talks about in-house butchering and why it changed his career. 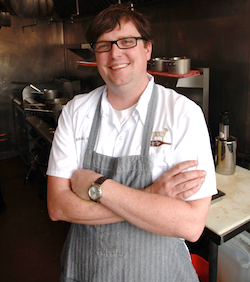 We started buying local lamb from Teresa Beemer as a fluke. I saw her ranch's name, "Ewe Bet" on another chef's Harvest Week menu, looked them up on the Internet and gave her a call. At first, it was a lamb shoulder here and there. We ran a leg of lamb special at Encore on Colfax for Easter Sunday. One day, she suggested I buy a whole lamb. I blew it off for a week or two. Then, during a very rushed phone call, I bit the line and took her up on it. That Friday, during service, a huge, Sudanese man who runs a halal cart in Aurora walked through the kitchen door carrying a seventy-pound lamb carcass. I paid him $20 cash for the delivery, shooing him out the door as quick as possible. Female guests from Cherry Creek shuddered, looking at the beast, thinking "are they actually serving that here"?

The next morning I had a similar thought: How were we actually going to serve that thing here? I'd had limited whole beast butchery training in culinary school, and that was 10 years earlier. I did my best. It was such a hack job. I think we got a few rib chops that were passable for service and a killer lamb stock. The rest was basically scrap—40 pounds of scrap. I racked my brain for a day, came into the kitchen and made a lamb ragu and a lamb sausage with what we had. Those dishes were insanely popular with both staff and guests. Not bad for bits and ends.

The next five or six times I bought the whole lamb, it was more of the same hack job. (Nowadays, the beast + bottle chefs and I can butcher and portion an entire lamb in a couple hours.) However, using that scrap to make inventive dishes was the only thing that kept me continuing to purchase the whole animal, at least for food costs' sake. It became an addiction. I started to remember where I'd mess up a cut on the last beast and improve my cuts the next week. We always had a set lamb dish on the menu and now we were running lamb specials on top of that. Aileen [Reilly, Paul's sister and business partner at the restaurant] and I joked that while Denver was known for its steakhouses, we were a lamb house.

In May of 2011, Encore hosted a Denver FIVE dinner and our theme was lamb. The Lamb Jam, as it came to be known, had a philosophy that was simple: take nine chefs and three whole lambs, and split the primal cuts up, with one chef taking each. Offal, neck, belly, ribs, and shank became passed appetizers. The hearty cuts, leg, chop, shoulder and saddle were plated entrees. The menu was incredible and the idea became a turning point in my career.

A few weeks later, it was time to plan the summer menu. After a few sub-par ideas for a new lamb dish, I proposed an idea to Aileen that we use the whole lamb as the entrée. The kitchen would choose a primal, and when that dish sold out, we would create a new dish using another primal, until it was time to buy another lamb. The smaller parts would be used for amuse bouche, charcuterie, and small plates.

That idea caught on like wildfire. Guests and service staff alike could not wait to see what the next idea out of the kitchen would be. When we were forced to shutter Encore in 2012, we were already formulating that idea into our next restaurant concept. Beast + Bottle was born from that idea. To make an entire restaurant's menu focus on using whole animal. It's a tricky idea, one requiring both kitchen and service staff to always be on their toes. Most nights, we go into service with just four rib chops, because that's how many the animal gives us. Constant communication among the staff exists in order to alert everyone that the dish will now feature t-bone once those chops run out. There are days where we walk into a huge prep list, and on top of that, have to wrestle a 120-pound pig for that night's service. Butchering an animal can be exhausting.

Of course nose-to-tail and in-house butchery are buzzwords in our industry. Every chef with a tattoo and a Cochon t-shirt wants to cut up an animal. But these techniques and ideas reflect a major shift in urban dining in America. Without a doubt, this is the right way to eat — seasonal, local, and responsible. We also didn't realize at the time how good it is for both the rancher and the earth: locally-sourced food only travels about 45 miles from the farm to the table. That transport uses up to 17 times less fuel than food shipped through the conventional system and costs less for the rancher. This idea honors the integrity of the animal. We do our best to create dishes with the same love that Teresa Beemer gives her lamb. It's not a new idea - just a good one. Ideas are free. It's what you do with them that matters.