Share All sharing options for: Hooked on Gelato and Sorbet: Fior di Latte Brings the Italian Frozen Treat to Boulder

Welcome to The Sugar Files, where Eater uncovers and features the city's best pastry talent. In this edition, the gelato company Fior di Latte, gets the spotlight. 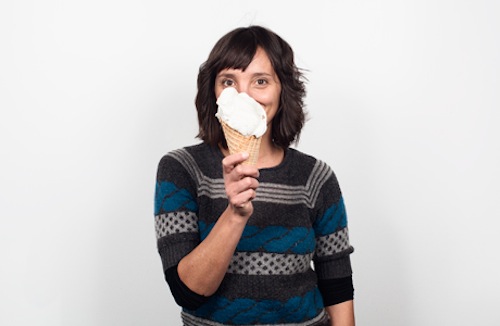 Fior di Latte makes the kind of fresh gelato and creamy sorbet that has you hooked after one sample, has you cramming three flavors into your first cone. I'll have the toasted basmati rice, pistachio, and peach sorbet, please. This is the gelato that has you waking up the next morning obsessing about how to get another scoop, where to get your hands on a pint. This is spectacular, real gelato.

Fior di Latte is a new gelato company. The owners are husband and wife team Bryce Licht, a Denver native, and Giulia De Meo, an Italian born in Venice. Fior di Latte came to life because of this duo's passion for gelato and their desire to bring it to the people of Boulder. The couple is currently seeking out a retail space for the frozen treats, but, for now, can be found twice a week at the Boulder Farmers Market. At the market, they offer a Southern Italian spin on an ice cream sandwich, where gelato is tucked inside a sweet brioche bun and then grilled on a special panini press. The gelato stays inside and doesn't melt while the outside gets very warm. It's the perfect weekend breakfast to enjoy on foot. Pints can currently be found at The Niwot Market and the Cure Farm Store. Orders for pints and cakes can also be made on-line with dozens of flavors to choose from. Among them are almond and saffron, brown butter, and, cantaloupe. Fior di Latte also offers stellar vegan gelato in flavors like pistachio and hazelnut. Eater caught up with owner Giulia De Meo to learn more about the new gelato maker.

Where did you learn to make Gelato? Bryce and I learned how to make gelato in Italy. Our favorite date spot was a very good Italian gelato shop. The young owner had won the Italian Cup for gelato and ran it with his family. When we founded our website design agency they asked us to design their website. We worked with them for a couple months. We did a photo shoot where we had to work with them at the kitchen and see how they made their gelato. We were there ten hours a day for a week. That's how we got the basics. We fell in love with it. Once we moved to Colorado and realized there was no such thing as gelato, I was desperate. Good ice cream, but not gelato. We started researching and studying like crazy- about ingredients, recipes, and the chemistry.

Why did you decide to open a gelato business? We've always been passionate about food in general. When Bryce was in Italy, he probably only knew how to make eggs, so I started to teach him how to make pizza, homemade pasta, sauces, the real Italian stuff. He had a completely wrong idea of what that meant. He thought it was super greasy, garlicky, spicy- absolutely not. He's actually really good and we started baking and cooking together. When we moved to Colorado and realized that Boulder would be such a great place for an authentic Italian gelato shop, we said okay let's start working on it, let's see if we can make it.

What about when the winter comes? The truth is we started this business in November last year and we were crazy busy making gelato for restaurants for the holidays- working at our commissary kitchen four shifts per week. Our idea is definitely the retail location, that is the main goal. We were afraid of making only gelato in Boulder, it can snow from October to May, it's not the perfect weather for gelato. Will we really have people coming for gelato when it's like five degrees? But, we're not going to have only gelato. We're also going to be an authentic Italian coffee and pastry shop. Every time we go back to Italy we use it as research. I have tons of friends who are pastry chefs in Italy and we spy on their work in the kitchen, we take tons of pictures. When we're not making gelato in the kitchen, we're at home testing pastries.

What new flavors do you want to try to make? It depends on what the farmers get me. I can't wait for the fall to come because I want to make pumpkin gelato. I would like to make grape sorbet. We're going to make eggnog for the holidays. I want to make wine gelato. One day we made strawberry-merlot sorbet that was incredible, but it's not something we want to make for the market- full of kids and families. I want to make a Sachertorte gelato, a chocolate gelato with Sachertorte sponge cake soaked in rum with a hard-chocolate coating. We made cherry gelato recently and it was an incredible success.

What is the difference between gelato and ice cream? The main difference is the freshness. It needs to be made fresh just like bread. We do happy hour promotions when we see we are about to shut down because whatever we have left we won't serve to anybody. We prefer to make it half price and get rid of it. Also, it has less fat. Some ice creams can have up to 30 percent fat. Our recipes always are at seven percent fat which means that a big scoop of gelato, which is probably about 100 grams, is always less than 200 calories. I would say fior di latte is probably 170 calories.

How long does a pint last in your home-freezer? Does it keep at the same temperature as ice cream? Since we don't use a lot of fat and because gelato is a fresh product, I wouldn't keep it for longer than a week. You keep it at your normal freezer temperature but the key is making different recipes between the gelato you serve at the market in the display case and the gelato you serve to restaurants or for home where freezers are much colder.

What is the best part of your job? Without a doubt, it is tasting the gelato fresh out of the machine.

What's the most challenging part? Balancing the recipes, because it's so easy to think, okay whatever, for this flavor it's going to be fifteen percent fat. No, we need to find a way to lower the fat and to balance the ingredients. If you are making hazelnut, the actual hazelnuts already have their fat content, so you don't need to add cream because the fat comes from the nuts. When you make fior di latte, it has no nuts, it's just milk, in order to reach that seven percent fat, you add a little bit of cream. Sometimes that balance is quite difficult.

What are you envisioning for your retail space? A big, bright, modern, clean shop. Many coffee shops in Boulder are so dark and depressing - we want something very bright where people can come and actually read and work. We want to be in downtown Boulder, ideally on Pearl Street, because gelato is a walking thing. I want families and kids walking around with a cone. In Italy I used to spend ten minutes checking out all the flavors before choosing. We want a big display with 30 flavors and pastries. Maybe having less flavors of gelato in the winter and leaving more room for the pastries. We'll also be a coffee shop. I want people to know that latte actually means milk. Of course we're going to have things like chai and mochas, we want people to keep their habits. At the same time I want the real espresso, the real macchiato, the real cappuccino, not ten sizes, there's one size. Trying to be a mix of tradition and local habits. Hopefully most of our ideas won't get shut down by the actual location.

Fior di Latte has some wholesale accounts, what restaurants serve your gelato? Mostly Italian restaurants. We are in Pizzeria da Lupo, Pasta Vino, Trattoria Bacco right across the street from our kitchen, so the gelato comes out of the machine and I cross the street with gallons. Il Pastaio is a very good pasta place and they always get our spumoni gelato cakes. Also Alba, The Bitter Bar, Antica Roma, Trattoria on Pearl, and Via Toscana in Louisville.

The name Fior di Latte's namesake flavor, could you describe it as an extra-virgin rendition of Dairy Queen vanilla? Yes. When I first moved to Colorado, the most plain flavor was vanilla, but I wanted something more delicate than that. Fior di latte is my most favorite flavor. I actually used to go to McDonald's or Good Times and I would have what they called vanilla, but it actually doesn't really taste like vanilla, it tastes just like milk. That saved me for a few moths before we started making our own gelato. I don't want to know what's in there and I'm a bit ashamed to say that I prefer to go to Dairy Queen or Good Times, but you know why? At least it's fresh.

Fior di latte literally means flower of milk. In Italy, it is the most simple and delicate gelato flavor, which means it's a testing flavor. If you go to a gelato shop and you taste that flavor and it's very good, chances are they know what they are doing and all other flavors must be good. It's like having a margherita pizza if you really want to test a pizza place. That's why we chose it as our namesake. Fior di Latte is the simplest flavor and that's our name.
· Boulder's Fior di Latte Gelato [Grace Full Plate]
· Rioja's Pastry Chef Eric Dale Dishes on Working for Jennifer Jasinski, Ghosts at Rioja and More [EDen]
· Elizabeth Mackey of Devil's Food on Pastry Pet Peeves, What She Craves When She's Not at Work, and More [EDen]
· Matthew Thompson of the Squeaky Bean on Life on the Sweet Side of the Kitchen [EDen]