Share All sharing options for: Gaetano's Celebrating Its Rebirth and Paying Homage to the Smaldones After More than 60 Years 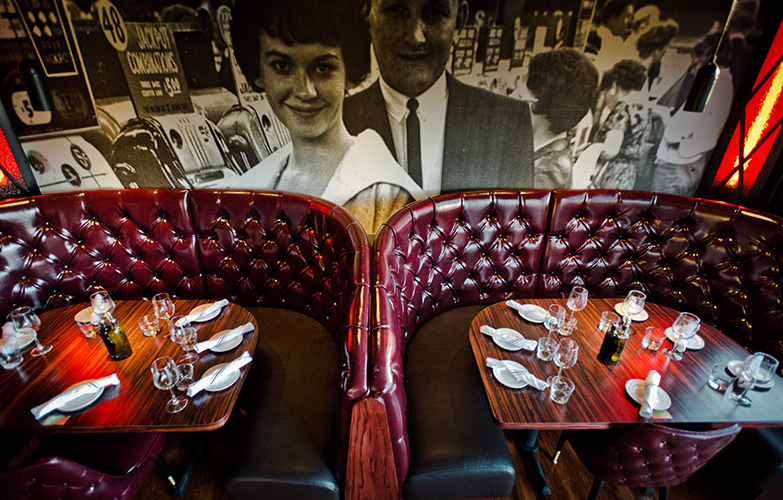 Open in 1947 by the Smalldones, a now-infamous Italian family, Gaetano's Eccelente Cucina & Cocktails has stood the test of time in North Denver for over 60 years. In 2005, Gaetano's was purchased by the Wynkoop and Breckenridge restaurant group. The traditional Italian eatery was overhauled in 2012- the goal was to update yet preserve the authenticity and history of this Denver institution. Eater sat with Gaetano's general manager, Katie Neirling, to discuss the mobster history of the Smaldones, the evolution of Gaetano's from the early days, the commitment to preserving the Italian hospitality, and what to expect at their one year anniversary of the remodel next month.

Gaetano's originally opened in North Denver in 1947 by Eugene, Clyde and Clarence Smaldone. For almost 50 years the Smaldone family ran Gaetano's, alongside the other Italian mob-like "family business" they became so infamous for. Can you talk a little about the history of the Smaldone family?

Ralph and Mamie Smaldone (the son's parents) had the 36th Avenue Café. It was still on Tejon and then in 1947, Clyde, moved it to the current location at 38th and Tejon, and renamed it Gaetano's, his nickname in Italian which is kind of a term of endearment.

We like to call the family, "sinners and saints" but one of the great things about the Smaldone family is that they took care of their own. North Denver had such a concentration of Italian immigrants in the 40's and 50's and the Smaldones were big participants at the Mount Carmel Church and they would do very wonderful things for families. For instance, if a family couldn't afford to eat that family would find food on their doorstep or be invited into the restaurant so they wouldn't go hungry. The Mullen Home For Boys (now Mullen High School) – would be invited to the restaurant and all the boys from the orphanage were in just for dinner while they closed the rest of the restaurant down for them. They loved contributing to the community.

Then, of course, there was the "sinner" part of the restaurant and family. There was the secret staircase that was between the restrooms and upstairs you could find slot machines, you could bet on sporting events and card games - it was definitely illegal at the time. They also bootlegged moonshine – which is how the family survived during prohibition, namely led by their parents. They wanted to take care of their family even though it was maybe illegal at the time, they always made sure to take care of their family.

Despite their mob involvement, what do you think the Smaldone family did for Italian food and culture in Denver?

We hear stories from guests who still come in today that remember coming there as children. They remember coming in with their families and children so it's really kind of the wonderful nature of an Italian family where you gather with family and friends around great food. The food is part of the focus, but the main focus is that you are involving your family and friends. It's about taking care of one another and having great, hearty, yet simple food.

Even still today, our kitchen is a scratch kitchen - the only thing we prepare ahead of time is the red sauce, bolognese and lasagna, everything else is made to order from scratch.

What's something unique and special about Gaetano's that most people may not know?

A lot of people assume that we've changed everything about the restaurant with the emodel, but we preserved a lot of the elements of the old Gaetano's. The bar, for instance, has remained intact from the original bar (we just moved the beer taps from the front to the back). Even the mirrors and red lights behind the bar were all original design elements and our wine is almost all-Italian wine.

Something that goes unnoticed often is the painstaking measures we go through to really support like-minded companies and those artisan products that build the brand and company, as well.

In September 2012, Gaetano's underwent a renovation and overhaul of the restaurant's interior and menu. What was the thought process behind the remodel?

The inspiration for the remodel was to embrace all of Denver. We wanted to use the Smaldones as our jumping off point, but also branch out. Two of the pictures for instance, on the far wall, are of Frank and Betty Saccomanno and Frank is still alive today. He represents the "saint" side of the history – he was a Denver police officer and North Denver was his beat. After he retired from the force, he became a bar and restaurant owner of six or seven restaurants in North Denver. His work contributed to the entrepreneurial attitude of the Italian immigrants and Frank is a wonderful man. His wife Betty pictured in the restaurant with him, passed away a few years ago. The history of Denver and Colorado gets lost with so many transplants, but we're able to talk about that history every single day here. We're able to pay tribute to those who gave us such a wonderful community to live and work in today.

Can you talk about the evolution of the menu and how you balanced keeping those classic Italian dishes, but also reinventing to keep things fresh?

We actually have one of the original menus framed in the restaurant from 1947. The logo type was basically recreated from our designer and that font is unique. Even the spelling of "eccelente" is incorrect in Italian, but we kept that to preserve the namesake. We try to represent dishes whether they're on the menu regularly or menu specials that come from that original menu in 1947. We want people to be reminded of a Roman Trattoria when they come to Gaetano's. You've got the classics like lasagna, spaghetti, meatballs, and alfredo on the menu but actually there are a lot of Italian dishes that are very simple like our fresh fish paired simply with vegetables and potatoes. We have a New York strip steak served with arugula, fresh parmesan, and homemade gnocchi. You can see shrimp, mussels and a spinach and shrimp salad on the menu, so you have a balance of lighter fare, along with that traditional spaghetti, heart-warming comfort food. There is definitely a range.

The old school sausage and pepper appetizer is always well-loved and even if you may not see it on the menu, were always happy to create dishes you might have had before or that you remember. As long as we have the products in house we are happy to go through and make those things for people – we do it all the time.

There was a couple that came into town and they had their heart set on a Veal Milanese. They called a couple places around Denver and no one had it on their menu. It's not on our menu, but we made it for them. Focus on hospitality is a huge part of what we do everyday. If we can do something for that for people we absolutely love to.

What's one of your most iconic and popular dishes at Gaetano's?

Our lasagna has definitely stood the test of time. Also, one of the dishes that I personally love and is a staff favorite is the pasta carbonara. It's made with the egg yolk like you would get in Italy. We've had Italians, who barely speak any English, that come into town and they came in and absolutely love it. It's a true version of the dish.

Why do you suppose the restaurant has stayed intact for so long and kept people coming back for years? What makes Gaetano's special?

I think it was because of the hospitality and the personal touch that the Smaldones provided. It was the same family for so long and there were people that had worked there for 10 to 20 years. You would see the same bartenders or members of the Smaldonone family always in the kitchen working. You knew what to expect when you went there, which was great traditional food and a warm welcoming environment. People attach to that and familiarize themselves with that. We try to do that, as well.

Even today, if asked, we'll show people the basement that has remained untouched from the early days. Claudia Smaldone (daughter of Chauncey and Pauline Smaldone) has come in and told us stories about her and her cousins playing hide and seek down there. It was the fun side of when parents had to go to work and the kids went to the basement to play.

In terms of old school, authentic Italian joints in Denver, Gaetano's is one of the few remaining and standing the test of time. How important is that in terms of preserving and maintaining what they stand for?

I think that's a huge value of the Breckenridge and Wynkoop Company. For instance, we have the Cherry Cricket and that is an institution and even known in other states. So much of what we do is about preserving landmarks and keeping traditions alive. We believe wholeheartedly in what we do and we're passionate about it. We have the honor and privilege to own a place like Gaetano's. I know to change what we did was shocking for some, some people don't like what we've done - to each their own, but we wanted to keep Gaetano's alive. We didn't want it to lose the spirit or its soul entirely. We don't want to see it turned into anything else but what it was.

What can we expect to see in the future from Gaetaono's?

We have a lot going on. For the anniversary of the remodel, which is September 12-15, we're going to start the weekend out with a wine dinner hosted by a longtime friend of Gaetano's, his name is Mario. We brought him back and he's going to have a great wine dinner put together. Then on Friday and Saturday, chef Daniel Ramirez will be taking exact recipes from that 1947 menu and feature those as our dinner specials. There's a cocktail on the original menu, it was a whole $1.75 back then, called The Zombie and our bartenders are going to look up the old school recipe and were going to feature that all weekend long too. We do a lot of events and we keep our event page up-to-date so definitely take a look there but you can really find the likes of live music to interesting brunches to Sunday Suppers.
· The Rebirth of Gaetano's Eccelente Cucina & Cocktails [EDen]
· Seven New Cocktails to Try This Fall in Denvers [EDen]
· Anniversary Weekend [Gaetano's]