Share All sharing options for: Renegade Brewing Company On Odd Ingredients and Women in Craft Beer

Welcome back to A Pint With, where Eater uncovers and features the city's most interesting beer-brewing talent. This time around Ali Benetka, the new head brewer at Renegade Brewing Company, talks shop. 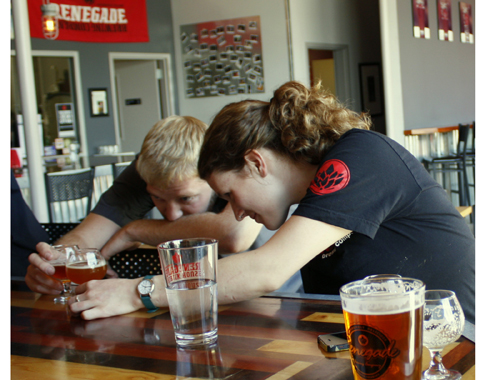 "Everyone has been asking me about women in the beer industry since I got this job," says Ali Benetka. She's the recently promoted head brewer at Denver's Renegade Brewing Company and she's only 24 years old. That makes her the youngest female head brewer in the state. "I never thought of it as being a woman in the industry," she goes on. "I just really love beer."

The soft-spoken brewer discovered her love for fermented malted barley when she studied abroad in Rome. "There was this beer bar there," she recounts. "Ma Che Siete Venuti a Fà. It was the best beer bar that I have ever been to... except maybe The Hopleaf in Chicago."

Ali, a Colorado native, went to Loyola University in Chicago where she studied history and biology. She returned to Illinois from Rome bitten by the craft beer bug— she started homebrewing and exploring the local scene. "That's what my first taste of the beer industry was," she says, "and since then the number of breweries that have opened up in Chicago is just kind of crazy."

Ali worked on the canning line and interned as a brewer's assistant at Finch's Beer Co. in Chicago's Mayfair neighborhood. After college, she returned to Colorado to work on Left Hand Brewing Company's bottling line before she landed her position at Renegade.

Renegade Brewing opened on 9th Street in Denver's Santa Fe Arts District in June of 2011 and quickly became popular for its bike and dog-friendly location, regular lineup of visiting food trucks, and strange creations like the sweet potato casserole beer.

Renegade also became the first brewery to utilize the Mobile Canning service for its beers, some of which are now available in 16-ounce cans. Earlier this year, the brewhouse opened the 25-tap taphouse and eatery Renegade Publik House in the DU neighborhood where they serve a variety of guest beers in addition to Renegade brews.

While Renegade's flagship beers, such as the 11.2 percent Elevation IPA and the Una Mas amber ale, won't change with the new brewer, Ali is revving them up in small batches, adding fresh raspberries to the 5 O'Clock afternoon ale and nutmeg to the citrus-forward Redacted IPA. She's also experimenting with an English-style pale ale with lactose and a beet saison. "It tastes like beets; It's pretty earthy," she says. "Beets work well with the saison, because they are pretty dry, and have a peppery flavor too. Te beer is purpleish-pink. It's the best looking beer."

Ali might be reserved, but her off-the-wall fermentations are everything but. She's bringing new flavor profiles, a fresh perspective, and the influence of her beloved beer city Chicago to the Colorado craft beer scene.

"I know a lot about Colorado craft beer, but I feel like I know a lot more about what's happening in the Midwest," she says. She's still working on making it around to the ever-expanding list of more than 190 breweries that Colorado has now. Aren't we all.