North Fork to the Detox Retox: the CapRock Farm Bar Opens In The Source

Share All sharing options for: North Fork to the Detox Retox: the CapRock Farm Bar Opens In The Source

The CapRock Farm Bar, which opens today at 5 p.m., is one of a kind. Not a trendy speakeasy, a casual sports or college bar, or the gateway to a restaurant, the Farm Bar stands proud if just a little vulnerable in the center of the Source in the RiNo neighborhood. What the Farm Bar aims to do is bring a slice of the Jack Rabbit Hill Farm, located in Hotchkiss, to the city through a thoughtful menu that spotlights local ingredients and CapRock spirits.

Named after the well-known gin and other spirits, CapRock, this bar will serve fresh, handmade orchard juices and crafted cocktails that showcase the brand, including peach and pear eau de vie, CapRock gin (apple-based), vodka, and grappa - all distilled with Colorado fruit and cut with untreated natural spring water.

"We have an authentic, handcrafted approach to making spirits and we plan to use the same approach at the Farm Bar" says Hanson. He and his wife Anna moved from California to Colorado to establish the estate winery, which has been certified organic since its opening in 2000. When Lance began crafting spirits in 2005, Peak Spirits became first organic distillery in the United States. Over the years Jack Rabbit Hill has also become an industry leader in biodynamic farming.

"I think that, as a whole, the cocktail movement, whether blazing new trails or returning to the classics, has taken on a strong culinary focus," says Lance."Bartenders are using fresh ingredients, and taking the time to create something complex that appeals to all your senses." 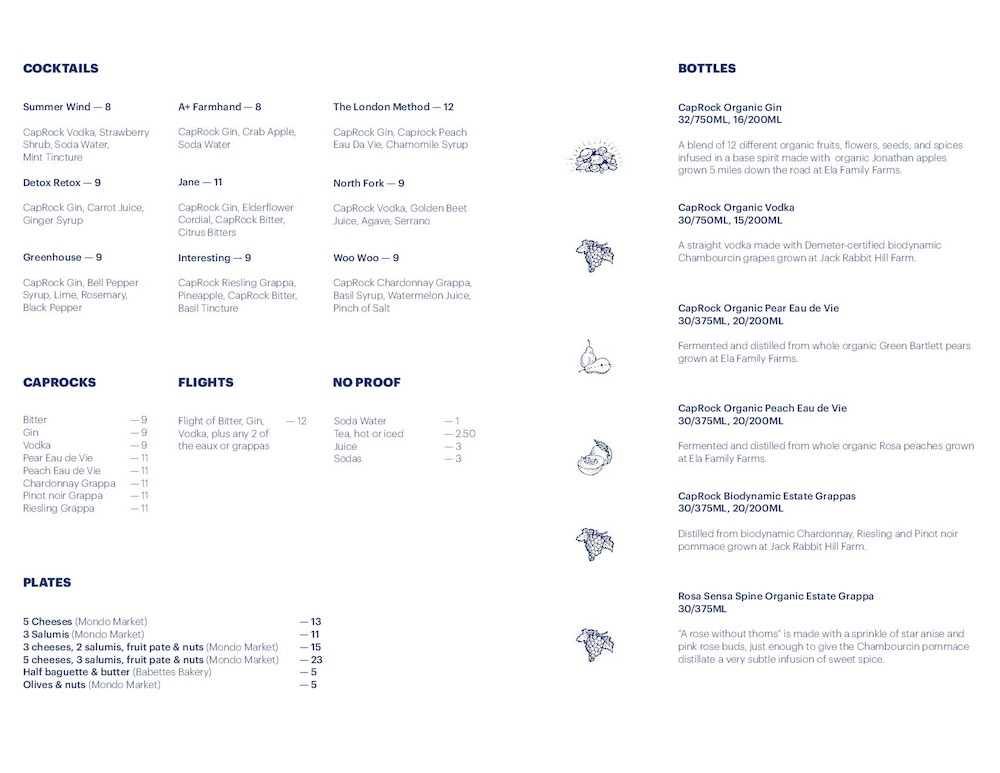 Behind the large matte-blacl bar mixing these seasonal, ingredient-inspired concoctions are manager and bartender David Donovan and his opening crew Wesley Case and Andrew Amaro.

In addition to craft cocktails, visitors at the Farm Bar can purchase full bottles of Peak Sprits products and flights of gin, vodka, and grappa. CapRock will serve cheese plates, meats, olives and nuts from The Source's Mondo Market, as well as baguettes and butter from Babette's Artisan Breads.

CapRock Farm Bar will be open from 5 to 10 p.m. Tuesday through Sunday, and on those same days it will sell bottles of Peak Spirits and other retail from 12 to 5 p.m. Soon to come are special events like product release parties, cocktail classes, and seminars about biodynamic farming.