Welcome to One Year In, when Eater sits down for a chat with the chefs and owners of restaurants, breweries, and bars celebrating one year anniversaries. 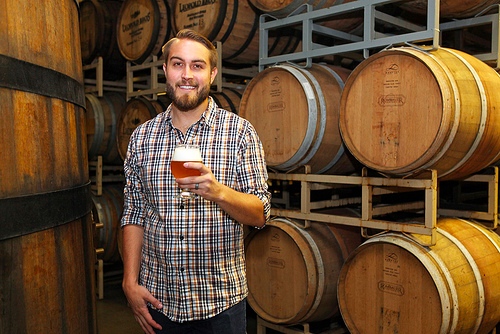 A year ago, Crooked Stave Artisan Beer Project opened the Crooked Stave Barrel Cellar, a taproom located at 1441 West 46th Avenue, to serve its sour beers to its loyal followers. Owner, head brewer, and master of Brettanomyces (a variety of yeast), Chad Yakobson, started brewing his beers at Funkwerks Inc. in Fort Collins before he moved to Denver and opened the barrel cellar. For the last year he's been brewing his beers on the brewhouse at Prost Brewing, and finally at the end of this month he'll set up his own brewhouse in The Source.

Yakobson researched wild yeast all over the world, and wrote his thesis about the behavior of Brettanomyces before he started Crooked Stave. His passion and dedication are noteworthy, as he has already received recognition from the New York Times and many other publications. The young brewer has created a cultish following in the Denver area with the largest beer release in Colorado this past May when more than 500 people arrived ready to get a taste of the ROY-G-BIV Day (Rainbow Day) beer collection. Eater sat down with Yakobson to talk about the taproom's first year, the best beers he has ever brewed, and what is yet to come.

This is your one-year anniversary for your taproom; why did you think Crooked Stave needed a taproom in the first place? The norm is for a brewery to have a taproom. That's what you do; that is how it works in the United States. We always wanted to be able to have an avenue to be able to present the beers.

How did you pick this space? It is a familiar area. Next door is Skyler Weeks from the Rocky Mountain Barrel Company. I don't live far from here so I knew this area and this community. Last summer we decided we were ready to start and we really needed to. We didn't fit at Prost Brewing Company [where we were contract brewing our beers before they aged in the barrel cellar]. It was September 12, and that was the first time someone could come in and legitimately have a beer of Crooked Stave at Crooked Stave.

How have you grown into the space? The big part of the facility really is all the barrels, and being able to house them. In the past year, we went from having a baby foeder and 86 barrels, to now 11 different foeders and 160 barrels.

On opening day last year, what went wrong? When we first opened the taproom, the first day we didn't have music playing. It was so awkward for the first couple of minutes. We had a lot of industry friends in the taproom and people giving me a hard time about it. It took like thirty minutes to get music going.

I clogged one of the lines that day too. We have a dry hopped beer, Wild Wild Brett Blue and this keg has more hops than we wanted which is why I decided to pour it upfront. Well, it clogged. So, on the first day, I am up there changing up the line instead of playing it cool.

What is your favorite memory in the last year? We had the largest beer release that Colorado has ever seen. We had 500 people show up for our Wild Wild Brett Violet day. The line wrapped around the building. We sold 1200 bottles. If there was any day that was a "here we are it" moment it was that day. The ROY-G-BIV project is the nerd in me playing off the color wheel. We put every single one of these beers we had ever made in the ROY-G-BIV series on tap. People flew from out-of-state for it. It was a small disaster and amazing all at once.

What makes you most proud of your beers? We are a business, but we don't operate in a traditional business way. I make passion-driven beers that are very creative. My life's research is in this brewery on the yeast side. I studied for my masters in Edinburgh on this yeast and I get to actually take my masters research and show that is it useful. I wanted to prove how practical research was. I wanted to know as much about Brettanomyces as possible.

Now I want to introduce as many people as possible to Brettanomyces. I want to teach as many brewers about it and Crooked Stave is a direct avenue to prove that not only was my research useful and correct, but also it educates. There are not many companies in the world that can say we educated; we continue to put money into research. We are based off research and we have this product that has a cult following. That's unique.

So you must have a pretty great team to back you up. What is the team dynamic like? We have an awesome team. In the beginning it was Travis Olsen and I. Travis is our graphic designer and he is phenomenal. Travis is a beer geek. He gets beer. Danny Oberle, who is now the assistant brewer, started in the tap room. I've known Danny since I was eight years old. We were college roommates.

When we moved into this space, there were only two employees. We are now at nine employees including myself. All that has happened in the past 10 months.

Our team is just a strong team that really gets along. It is awesome to be with people who care so much about what they are doing. We were all out here till 2 am last night working and I think part of the reason is because I'm still here till 2 a.m. They are just as passionate as I am. I hope it always says that way.

What is next for Crooked Stave? The Denver base at the Source is phenomenal. It's a beautiful taproom. I put a lot of time and effort into that over the past year and a half. No clue exactly when we will open. All depends on how construction goes.

What is your favorite aspect of the beer industry? We are all really close friends in the industry. Everything is about who you know right? It could not be truer in the brewing industry. A lot of what we have I owe to everyone else in this industry who has helped us along the way. You can't just do this on your own.