Share All sharing options for: Rosenberg's Bagels and Delicatessen, an Authentic New York Deli, Will Open in Five Points

By the end of April-beginning of May, Josh Pollack will bring authentic New York City bagels to the heart of the Five Points neighborhood. Pollack, who had been altering water to bake his bagels at Gather for the last twelve months, will open Rosenberg's Bagels and Delicatessen at 725 East 26th Avenue in a building built in 1890s, known as the Arcade.

The long skinny building that has entrances on both 26th Avenue and Welton Street was purchased in 1928 by Charles L. Cousins. It was passed down through his descendants and is currently owned by Dr. Renee Cousins King, his granddaughter.

The story behind the building is dear to Pollack's heart who sees this former hotel (on the second floor) and mall (on the first floor) as a great fit for his business. He wants to revitalize the historic space and give it new life by bringing back the traditional bagel making, using recipes that are over 50 years old, blending old and new in both design and bagel craft. "We will be salvaging as much original material from the building as possible and decorating the restaurant to pay homage to its original 1920s era," Pollack says. These materials include original tile that was laid by hand by Charles L. Cousins. 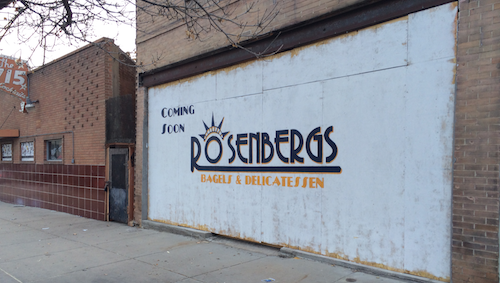 Walking in from the 26th Avenue side, a bar will be set up and guests will be able to see - through a glass wall- the whole process of bagel-making: where the bagels get rolled, the oven, the kettle where they boil, and more. The deli case will be the stopping point for ordering food to go or to stay.

The 2,400 square foot space will include seating, but most of the space will be taken by the bagel production line as well as a meat and cheese curing case, visible to patrons. Inspired by Russ & Daughters, a century-old New York City institution, Rosenberg's will be smoking fish and making its own corned beef and pastrami. We will be curing our own meats and age them in a glass enclosure for our guests to see. "Can't be a Jewish deli and not do that," Pollack said, adding that he is also planning a cured meats program that will phase-in later.

When Rosenberg's opens, it will serve daily from 6 a.m. to 3 p.m. Stay tuned for updates.