Welcome back to A Pint With, where Eater uncovers and features the most interesting beer-brewing talent (or in this case potion-brewing) talent. This time around Shine Restaurant & Gathering Place in Boulder gets the spotlight. 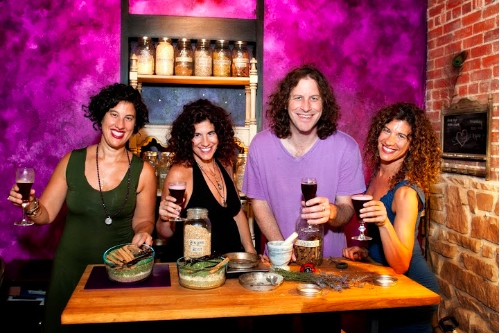 There is a kind of magical place sitting in the heart of Boulder. A place where the bar and restaurant are seen through the glass garage door that is the barrier to the street that allows customers to peer inside. But what is not seen through the glass are all the hats the restaurant wears; event venue, yoga studio, and book reading venue. Not to mention potion laboratory. Here's the skinny on Shine Restaurant & Gathering Place, owned by the Emich Triplets with potions crafted by Andy Bottegaro.

"Andy brews the potions almost like a tea," explains Jill Emich, "the interesting parts are the essences. There are four types: gemstones, flower, story, and environmental. With the story essences, he will have a bowl of water and he will read the story to the bowl of water as if the water is a child. He then puts the vibrational water with the story into a bottle really quickly and closes it and that is where the vibrations come from."

For example, an excerpt from the Wizard of Oz where Dorothy is connecting with her heart and goals is read to the Yellow Brick Road potion to pass on that intention. These essences are what create the vibrations in the potions. It is putting water that has been energized by an essence into a potion that sets these potions apart from the rest. They have potions and sipper (smaller potions) potions for laughter, resetting, and luck.

The triplets, Jennifer, Jessica, and Jill, originally from fast paced New Jersey, began practicing yoga 20 years ago. They found balance and meaning in their lives, or intention, with yoga, wellness, and joy. Previously owning Trilogy the sisters say Shine is different and about sharing your gifts with your community and shinning from the heart. "Trilogy was the dark and Shine is our light," says Jennifer.

Once Shine opened the girls told Andy, the potion maker and a bartender at Trilogy, about their Shine vision and he wanted to bring his potions to the restaurant. They jumped at the opportunity and originally it was a small project but now growing from three potions to 13, and now bottling and selling the potions, they know it is something the community appreciates.

"When people ask, 'What should I get?' Our response is well how do you feel?" It is all magical intentional based," says Jill. "He is a wizard in his own right no questions and he puts these vibrations into it."

This wizard puts an incredible amount of thought and intention into each potion. In the Empress, which is good for pregnant women, he uses two vanilla beans. One he slices in half but not completely through to show the connection between the mother and child and then the second he splits completely in half to show the separation a mother and child will have.

The potions are non-alcoholic, though they pair well with alcohol. "If people are coming in after a yoga class or are just not drinking for whatever reason they can come and have something other than soda or sugary juice," shares Jessica Emich. If you do want to pair them with alcohol they use fair trade organic liquor. Local CapRock gin pairs well with the Owl Eye potion which is for "inergy" or they suggest vodka, which is the girls spin on vodka red bull. There is a potion for every feeling you could be having when you come to sit at their bar and some potions are even served warm.

Wizard Bottegaro brews Friday through Monday and with the popularity of his potions they just hired on three new herbalist apprentices. Andy is working on a new line of potions that will be for the table and it can then be added to wine, beer, water or whatever beverage you have so you can get the intentions that the potions have in whatever drink you like.

You can buy the regular potions or the sippers at the restaurant currently or at the soon to open Nectar House in Denver. The long-term goal will be to have it on the shelves of natural grocer stores.

The potions aren't the only thing catching peoples attention but also the beer. Shine has a gluten free beer on tap Liberation, Down Dog Red which is an imperial red, and Trilogy IPA to name a few. The IPA will be available for purchase in a can in the near future. All of these beers are brewed by head brewer Mike Kasian.

"People are ready for some magic," says Jill, and based on popular demand, she's not wrong.

· Shine coverage [EDen]
· all A Pint With posts [EDen]