"Local, one of a kind, hippest," are some of the words used by the Larimer Associates Group when describing Union Station. The 125,000 square foot train terminal is currently being transformed into a hotel and retail destination will open to the public on July 12 at noon. It will house Stoic & Genuine, a restaurant from chef Jennifer Jasinski, Mercantile Dining & Provisions from chef Alex Seidel of Fruition, as well as new locations of Snooze and the Kitchen Next Door. The project, which also includes a 112-room luxury hotel, announced today the last batch of retail tenants. 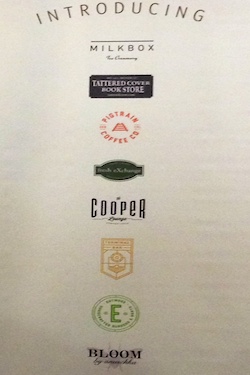 The old barber shop, located in the southeast corner of the building, will become the home of Milkbox Ice Creamery . From a space that features bistro table seating complete with terrazzo floor, subway tiles and the original large mirrors, the shop will serve 16 flavors of the popular ice cream from Little Man Ice Cream. Because there is a liquor license to work with on the space, boozy ice cream shakes will also be an option.

Eatmore Burgers & Brats will bring handcrafted burgers, brats and french fries to the terminal. While the venture is owned by Larimer Associates, chef Troy Guard is consulting on the menu and assisting with developing recipes.

For those in search of high-end cocktails and a large wine list, the Cooper Lounge, a bar overlooking the Great Hall from Union Station's second floor, will be the right destination while beer-heads will be able to get their fix at the Terminal Bar. There, more than 30 varieties of Colorado craft beers will be offered in a lower floor space that includes original ticket windows and a huge outdoor patio overlooking Wynkoop Street.

Other tenants include the Tattered Cover, Denver's most beloved independently-onwed bookstore as well as Bloom, a flower shop that already has a first location in Cherry Creek North.