Welcome to Lifers, a feature in which Eater interviews the men and women who have worked in the restaurant and bar industry for the better part of their lives. Here they share their stories. 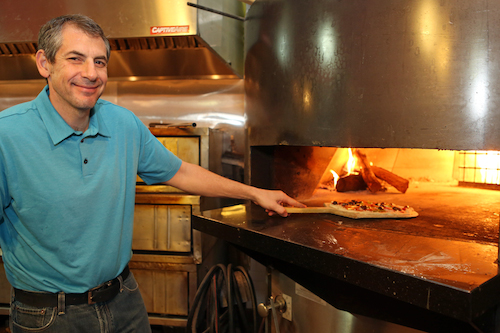 Tony Pasquini has spent the majority of his life in the pizza business. Though he originally had a hand in Pasquini's, he and his mother, Judy, now operate their own collection of neighborhood pizzerias, following a legal dispute with his sister Melinda. Together, Tony and Judy Pasquini oversee Tony P's locations in Uptown and LoHi, as well as Zio Romolo's Alley Bar, adjacent to the Highland location. The comfortable spots boast Italian offerings in addition to pizza, extensive happy hours, and an emphasis on community.

In honor of Pizza Week, Eater sat down with Tony to talk about his decades in the industry, his take on trends, what it means to be there for guests and more.

How did that transition into opening the first Pasquini's? I had worked at different pizza places all the way through high school, and then my dad had opened a place on South Broadway in 1985, and I worked there in college. And my senior year of college, I opened the original Pasquini's in 1986, with nothing—basically $300.

How have things evolved in the business since you started out? I think there's a lot better pizza out there in the marketplace. When I first started, no one was really doing anything that was very good at all. So I think people are using a lot better ingredients, more traditional methods, just doing a better job making better food.

What's been the most surprising trend or change that you've seen in the pizza business? There's a lot of trends out there, right? I've been making pizzas for 38 years and so I've seen a lot of trends in different areas—bagels, whatever. So it's funny to me that pizza is sort of a trend now or was a trend a year ago. It's funny because it's always been there and now it's cool to have a pizza place, which I think is great because pizza—if you do it right—it's authentic and can be healthy and kind of fits with all the trends out there in terms of real food, craft food, food people care about. Rather than just processed, canned, prepackaged sort of things.

How do you try to incorporate trends like gluten-free, emphasis on local ingredients, etc.? I've been lucky because I'm Italian, my family is Italian. My father was born in Italy, my aunts and uncles are in Italy, so all the trends that are out there—growing your own tomatoes, using good ingredients, specialty meats—good salamis, good prosciutto—making your own pasta, my family always did that. We drink Italian digestivos and aperitivos. It's funny that's the trend because it's everything we've done our whole lives, and for me it's just been a way of life. And always trying to do that in the best, most authentic way you can. It's easier now because there's products out there that help you do that. Eight years ago, when I said to my supplier, "Hey, I want organic arugula" they're like, "You're crazy." It's always trying to find the most authentic thing.

Can you describe your favorite or ideal pizza? Lately, I just eat Napolitano pizzas myself. They're thinner, not as heavy, just with San Marzano tomatoes, a little bit of fresh mozzarella cheese and some good pepperoni, like artisan pepperoni or salami, and that's it. Maybe some arugula on top, and I'm good to go. For me, it's a lot lighter, fresher, more flavorful but simpler. I don't need 10 toppings and a heavy pizza.

What keeps you going or motivates you in your business? Everyone needs a reason for being, a reason for doing what you do. For me, you want to make a difference. You want to do something different but make the world a better place. It's hard to do that when you're running a pizza place. But the way I look at it is we have a lot of opportunity to make the world a better place on a daily basis, just from number-one giving people good food that's authentic and real and good for you. But the second thing, more importantly, is the way you go about that. How do you treat people with respect, how do you make a cranky person happy when they walk in the door? How do you create a happy, welcoming place and on a small level make that person's day better? How do you do that every day, 400 times a day? So that's the challenge for me.

What do you consider the high point of your career so far? I haven't thought about that because I'm always just trying to do better. You accomplish one thing, and then what's the next thing we're going to do to do a better job? To get better service, to get better food, to get better offering, to make people happier, to make the place more unique? So in terms of what's my biggest accomplishment? It's the next thing we do. For me, it's making this location [17th and Clarkson in Uptown] an important part of the neighborhood, a vibrant, welcoming place.

How do you address or cope with failures? What I've learned in terms of failure, is that I haven't been afraid to make mistakes. And that's how you get better. But I've learned that—I never considered myself special—but I think one of my strengths is when something does go wrong you figure it out, and you try to do better the next time, and eventually you figure it out. I've learned a lot of people aren't that way and don't have that resiliency to be successful and that's what you need. Business is tough. In any business there's competition, there's people problems, supplier problems, so you just have to try to always get better, learn from your mistakes and fix them, keep going forward and stay positive.

Any examples of menu changes that were either successful or met with resistance? You're always adding new things to the menu and either some things take off, some things don't. Some things people don't get, some things fit perfectly. You just have to keep trying. I think it can be a question of timing with trends. Back in 1992 I put prosciutto and melon on the menu; people were like, "What's that? It's ridiculous." But at some point or another, prosciutto and melon became really popular. Some of the successes I think we've had are I never really wanted to do raviolis because it's so much work. But we decided, "You know what? It's time to do raviolis because it's authentic, and it's good and we've got to just do it." It's a lot of work but it's worth it. It's seamless and you add it to the menu and it's like, okay I should have added it 10 years ago.

Can you summarize your overall philosophy on what a pizza place should be like? I don't know what other pizza places should be like, but I just know what my pizza place and what my goal is. You know, pizza is egalitarian—anyone can eat pizza. My goal is to put people together and when I walk through my place it makes me happy when I see a family next to an empty-nester, next to a gay couple, next to a Mexican family, next to a black couple. That's what happens here and it's what we're trying to build and keep going. That's my goal, a place where everyone's accepted.

How have patrons reacted to the name change of the establishments you own? I think we've confused a lot of people. It's been a very strange time for me because with Pasquini's we did it for 27 years and everyone knew about Pasquini's and knew what we stood for and we had been there. So trying to recreate that with an emphasis on what I just described, in terms of being an example of a place where everyone is accepted and a community gathering place, it's challenging. Because not everyone likes that. Some people just want to go be with everyone who's exactly like them. And that's not what we're about. So there's people who don't really get what we do. With the rebranding you have to stay true to what you believe in and do it over and over and over again, for years, before you build something. So that's what we're doing and that's the message we try to get out to people is, "Hey, we're here, we stand for what we've always stood about," but now it's even more important because we realize that's our goal, and that's the important thing, in life too.

Any interesting stories about regulars or anecdotes that stand out?
Being in business for 38 years, you get people who come in and they were engaged when at Pasquini's and then they come to Tony P's. So people are finding us. There was this one couple who would come once a month during their engagement, and they had their engagement party at the restaurant as well. There's people who would bring their kids in strollers, and now the kids are like 30 years old and come back with their kids. So that's the kind of thing I really get off on. Just last week there was a girl who came in, about [age] 25, to celebrate her being six years cancer-free. So that was just like, what an honor that they chose us to come do that. And there was just this palpable joy they brought to the restaurant that night, and it made me so proud that we were there for them and they had a great time and we could be a part of that.

How do you spend your days off? Any places around town you like to go? I don't go out for Italian much [laughing]. I have three kids, a beautiful wife, and I like to spend a lot of time with them. Coach my kids' basketball teams. I like to go out to restaurants, and my kids are pretty well-behaved so we like to go out and check out new places. I just try to lead a joyful life.

What are you plans for the future? It's been a strange time for myself and my family over the past couple years. It's just doing what I do and staying true to what I do and living life, finding joy in what you do. Maybe five years ago it might have been, "Oh I want to open up 20 stores." But now I'm happy with just this store and the Highlands store and that's a lot, and it's more than most people have. It's enough of a challenge and there's always a next step. New menu item, new community item. My one goal—and I have to figure out how to do this—but I want to reward people who do good, like give them a free pizza every month for a year. But how do we do that? I don't know if we could do it through Facebook, but we're working on it. Nominate people who do good things, and get people talking about it and talking about positive things and reward them for it. That's my next goal.