Welcome back to A Pint With, where Eater uncovers and features the city's most interesting beer-brewing talent. In this edition Boulder's Twisted Pine Brewing Company gets the spotlight. 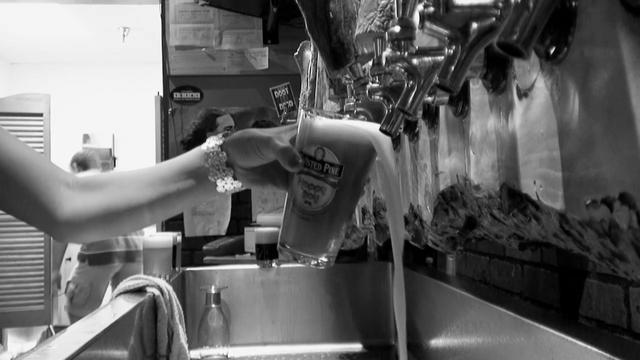 It's no surprise that a brewery with a name like Twisted Pine draws a funky, outdoor-loving community of craft beer drinkers. They post up at the brewery's outdoor oasis of a patio, and inside at the bar sporting wooden taps that were hand carved by Twisted Pine employees. They come not only for Twisted Pine's award-winning and experimental beers, but also for the brewery's menu of fresh tapas, build-your-own paninis, and beer sauce pizzas. Not to mention Twisted Pine is almost always hosting some kind of community event.

The lineup of beers at Twisted Pine represents classic beer styles, each with their own spin. For example The Hoppy Knight, a black IPA named after the company's founder Gordon Knight, has an unexpected citrus intensity amid rich, roasted malt flavors. Another inventive Twisted Pine beer is the Reilly's Oak Whiskey Red, an ale brewed every 14 months and aged in old Buffalo Trace bourbon barrels. This bourbon-like beer is the perfect combination of vanilla, oak and caramel, without the high alcohol percentage— it's only 6 percent ABV.

Twisted Pine offers a locally sourced food menu made to pair with its lineup of beers, as well as beer dinners and special pairing events to boot. One of these events, a blind food and beer tasting, takes place this Saturday and will be led by the Unseen Bean, a local Boulder coffee roaster that supplies the espresso for Twisted Pine's Big Shot Espresso Stout.

"The expansive range of flavor that brewers can achieve— coffee, toffee, chocolate, chile, citrus, Lacto, Bretta, and on and on and in countless combinations..." says Justin Tiolatta, the logistics, linguistics and statistics manager at the brewery, "provides a whole spectrum of opportunities to improve the taste of a course, whether it be by compliment or contrast."

Whether you're at a pairing event, or just rolling through for a snack and a pint, Twisted Pine's offerings are bound to wow you. Anything but pub grub, the approachable menu is packed with fresh ingredients and bold flavors. The brewery is widely recognized for its beers, but rarely noted for its thoughtful menu.

Also noteworthy at Twisted Pine is its emphasis on community. "One of our main objectives in our mission statement is to support the community that supports us," says Tilotta. "We do a lot of fundraising and a lot of events here for local charities, [host artists' nights], and try to work with the community as much as possible."

Since its opening in 1995, Twisted Pine has taken a "low-key approach and made high quality products." Perhaps that's why it has become a Boulder institution, and a must-visit destination for beer-savvy tourists. Tilotta says support from the Boulder-based Brewers Association, as well as from Twisted Pine's quirky, earthy neighbors is keeping the brewery thriving. "We're right in the middle of the universe as far as we're concerned."