Bonanno Brothers Turns One at the Park Meadows Mall

Share All sharing options for: Bonanno Brothers Turns One at the Park Meadows Mall

Welcome to One Year In, a feature in which Eater sits down for a chat with the chefs and owners of restaurants celebrating their one-year anniversary. 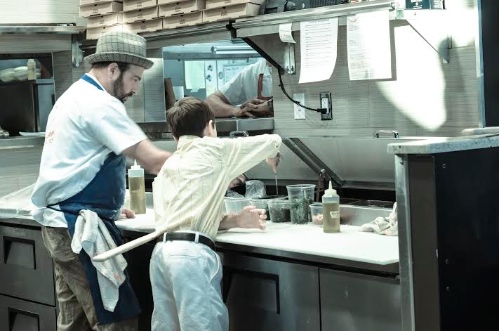 On April 29 Frank Bonanno's 10th restaurant, Bonanno Brothers Pizzeria, celebrates its one-year anniversary. This was the restaurateur's first foray outside of Denver proper and many wondered about the move. Chef-driven, made-from-scratch food is the norm for Bonanno's restaurants, but it is not the standard at the Park Meadows Mall in the chain restaurant-heavy area where the pizzeria operates. The biggest complaints Bonanno has received from his guests have been about ranch dressing, or lack thereof.

The year has been filled with adjustments and the menu has adapted to the demands of guests, but the chef's expectations have not. Good ingredients, silver on each table, and great service remained a priority. Eater talked with Bonanno about the roots of the pizzeria, the evolution over the last twelve months, and the future.

How was the idea for Bonnano Brothers Pizzeria developed? We tried to do an Osteria Marco at the airport and that didn't work. Bonanno Brothers is essentially an Osteria Marco- the salumi, the burrata. At one point, Park Meadows contacted me and they said they wanted to have something non-chain-like move into the space. I am the first independent person there. They liked our concepts- cocktails on tap, wine on tap, and no one was really doing anything like that out there. It is all very chainy in that area.

How did you decide on the name? My partner was very adamant that we use my name so we basically just decided that my father's company was called Bonanno Brothers Construction so we used that.

What was the reception like from diners? The restaurant has mostly been really well-received. For some people, it's a little weird down there because we don't have ranch dressing and we don't have Coke. We use Boylan soda because we wanted to use all natural sodas. There has been some backlash but for the most part our business just keeps growing and growing. We thought it was going to be a gangbusters right out of the opening but that was not the case. We have found over the past probably six months in particular we are seeing the business just grow and people are really appreciating it.

What did you have on the menu that people didn't seem to understand? The cocktails on tap in the beginning people didn't get. There is definitely a different dynamic in the suburbs. Not bad, it is just different and we are finding our niche. We are taking our wines on tap off tap because people are thinking it is cheap and we are going to replace it with beer and do bottled wine because we just aren't selling any of it. We have seven or eight wines on tap and we have four cocktails on tap and we are selling so much beer it just makes sense. If that is what they want we just have to give it to them. Salt & Grinder is opening next month and we are going to do a house-made ranch dressing on our house salad there. Maybe when the recipe is great and finished we will have those guys in Park Meadows make ranch dressing. I honestly don't know what you need ranch dressing for in an Italian restaurant, but apparently you do.

Where did the idea to make the interior of the restaurant look like a train station come from? Jacqueline, my wife, thought the train station theme would be cool. Our pizza oven came from Florence, Italy and I think she just found a connection with the train station there. When we talked to Quang Ho [the artist Bonanno has used for this space and others] and told him what our idea was and what our colors were he was like "I could do a great mural." We thought it would be different and original.

Bonnano Brothers Pizzeria is your 10th restaurant and you are currently in the works on opening your 11th, what is your formula for a successful restaurant? I would say the reason we are successful are the people who work with me. Part of the reason for growth isn't necessarily that I want to grow. It is more that when you have really good people that work for you they need more money and the only way to get more revenue is to continue to open restaurants that produce good revenue. Over the past couple of years I have made a lot of the people who work with us partners in the restaurant. I think that is a huge thing. That is really it in a nutshell. It is by necessity sometimes you have to grow.

How does it feel to have the one-year anniversary with this restaurant? I think your milestone in a restaurant is five and ten year. That is when you really know where your restaurant stands. 50 percent of restaurants fail in the first two years. I don't think you get excited about anything in the first two years. You get excited in maybe year three through five when you have paid off your debt and are making money. For a one-year anniversary you don't do too much. You don't get too excited.

As the chef and owner of so many restaurants how do you find time for each of the restaurants? What is your balance? I go down to Bonnano Brothers a couple times a month. I spend 90 percent of my time on the Grant Street and 7th Avenue corner in the Luca D'Italia kitchen. It is where I can be creative. The Luca kitchen is a huge kitchen. I have my own station in the back where I have every tool I need. I find I stay here and do a lot of testing. Last week, I made shrimp rangoons in a spicy carrot sauce for Bones. Yesterday, I made a knish for the first time. Today I am working on a spin on oysters Rockefeller for Mizuna. That's why I stay here. I will go and hang on a Wednesday or Saturday night at the pizzeria and see the dishes as they go out and then just get feedback. I have great chefs that work with me. You have to trust your employees. You can't micro manage. If Joey Sabatini, my executive chef, calls me and says "that dish you put on is a dog," and I say "well, what do you want to do," he usually has an idea. We started doing fresh pasta specials about three months ago because we have to be competitive of what is down there. Now we are doing daily pasta specials.

There was a change of chefs in the beginning when Dave Lindberg left, can you go into a little detail about that? Joey Sabatini is the main chef now and has been at the restaurant since day one. He is from Jersey and has a lot of the same philosophies that I have. When Dave had to move on it was just because of different philosophies. He was only there for about four days of us being open. Maybe this was over his head a little bit. I wanted to do what we do at Osteria Marco and he really wanted to go more real Italian-style pizza and buy triple zero flour for the dough. I said no. Our pizza at Osteria Marcos is one of the best in the city we don't need to fuck with that. We just need to put it in a wood-fired oven and get more flavor on it. That was really the whole thing. We are still on really good terms. I would hire him back in a minute.

What was the best moment at the pizzeria since you opened? The first two months working every day at the pizzeria and making pizza in that awesome wood-fired pizza oven was like magic. I love to make pizza. I am fast, I am good at it, and seeing the pizza that gets perfectly charred and cooks in three minutes is incredible. Also, throwing wood on the fire. There is not a more cooking integral thing that makes you feel, like yeah I am cooking. I mean it is so artisanal. That's something that you never forget. Also to be there one night with my son Marco spinning pizzas. Yeah, those are the memories I love the best.

What is next for Bonnano Brothers? I think that's more up to my partner David Mosteller of Skyport. I think it is really up to him as to whether he would like to move this concept further. We've never done the same thing twice. Bonanno Brothers is as close to replicating something as we've gone. But at 11 concepts at one point you have to redo one of them. Korean BBQ? No I'm probably not doing that. But would I open another Bones and add a sushi element to it? Yeah, maybe if the right space came along. There is a 50 percent possibility we will put ranch on the menu. You can have your "culinary thing," but at the end of the day it is the guests that you have to make happy. As much as I don't care about ranch dressing and don't see what the need for it is there, if enough people are asking for it, I guess we have to do it. We'll just charge for it.

What is the main thing you want your customers to walk away with after a meal at Bonanno Brothers? We are really trying to do something that is artisanal, organic, and fresh. All of our lettuces are organic. We are making so much of our own product; the mozzarella, the burrata, and the ricotta. After Salt & Grinder opens, all of our salumi will come from there which will be house-made. I also want people to understand that we are different form a chain. We are focused on service. Like in all the other restaurants I own the service standards are really high. I think it is really important that you use silver at a table even at a pizzeria and that the water glass is never less than half full. Those are things I think we are striving for down there; points of service and quality of food. I'm really proud of it and I'm glad to see that there are significant amounts of people down there that do appreciate it.