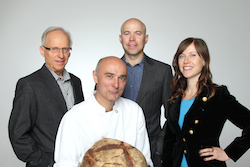 If you voted for one of the three choices offered by Udi's as options for its new brand, you got your way. All three of the choices presented- Etai's, Izzio's, and Silvi's- have been selected to replace the name Udi's, namesake of founder Udi Baron. The major shift and rebrand follows the 212 sale of the family's granola and gluten-free businesses to Boulder Brands. In that transaction, they also sold the company name, Udi's Foods, and as of July 2014, the Barons can no longer use the name Udi's Foods.

In January, the Baron family asked fans and members of the food community to suggest new names for the company. From thousands of entries three finalists, named above, were selected based on relevance to the brand and the family's heritage. The end product is a parent company called "Baron Group" and three sub-brands: Izzio, Etai's and Silvi's.

Between now and July, Baron Group will host a series of parties at each of the restaurants and café to introduce and celebrate the new name and logo. The Baron's final farewell to Udi's Foods will be a block-party style celebration scheduled for mid-June.