Welcome to the Sugar Files, where Eater uncovers and features the city's best pastry talent. In this edition, Ryan Walker of Guard & Grace gets the spotlight. 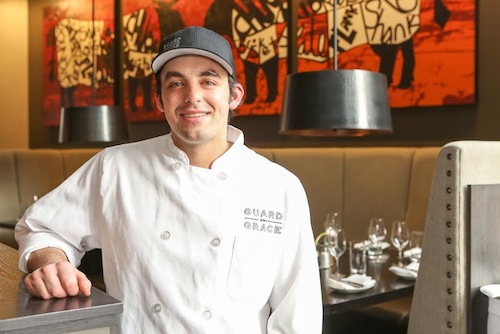 Ryan Walker is the executive pastry chef at Guard & Grace, Troy Guard's sleek new modern steakhouse which offers warm cookies with the check. After graduating from Johnson & Wales, Walker worked the pastry department at TAG for three years before opening Guard & Grace. The son of a chef, he has been working in kitchens since he was 15. This talented 24-year-old pastry chef talked to Eater about skipping culinary school, the importance of asking servers what they like, and Guard & Grace's healthier approach to dessert.

What is your approach to pastry at Guard & Grace?The banana cream pie and sticky toffee cake were on the menu at TAG and everybody loves them so we kept them on the menu here. The rest of the desserts are a little bit healthier. Our waffle is made with organic quinoa flour, it's completely gluten free. The butterscotch tart has a steel-cut oat crust. I had never made it before but we tried it out and it works.

Where do you get your menu ideas from? Cookbooks. I go to the Tattered Cover a lot and just read.

Do you have any favorite cookbooks? I really like all the ones from restaurants in New York, like Eleven Madison Park. The stuff that they're doing in New York is above anything they are doing in Denver. I want to go to New York sometime.

Where would you want to go for a fantasy stage? With this guy named Jordan Kahn. He owns a restaurant named Red Medicine in Los Angeles and his plating is unbelievable. Eleven Madison Park would be cool too.

Who has been your biggest inspiration? My dad. He was a chef and I always used to watch him cook when I was little. It was pretty cool to see what he had up his sleeve. I learned a lot from him, he pushed me a lot. I kind of fell into the cooking world and pastry is a little bit better than handling meat so I went that route.

What is the hardest thing about being a pastry chef? I think in the beginning it's hard because there are a lot of fundamentals but once you get a grasp on them, things flow smoother. Just the stress of having a lot of events coming up and once you get hit with a lot of stuff- we did a bunch of parties in the beginning and it was stressful- then it kind of slows down and you get to re-group. Everybody says that I'm crazy and I don't know why. I drink a lot of caffeine.

What's the best part? Making people happy. I think it's just a good way to express your creative, artistic side. Also, I like messing around with the cooks in the kitchen.

Do you have any kitchen pet peeves? It annoys me when the cooks set timers and then they don't turn them off and it's right next to where I work and it's like, what is it for? I don't know! So I try not to set timers.

What is your advice for aspiring pastry chefs? Don't go to school, just work at a restaurant. Don't waste your money honestly. You can learn a lot more and save your money. Luckily, I had a rich grandma; she paid for my school.

Do you have a sweet tooth outside of work? Not really. I used to, but not anymore.

Where do you like to go out to eat in Denver? Chipotle. I don't really cook at my house.

What would you like to put on the menu? I like asking servers what they enjoy and try to please them because at the end of the day, they are the ones pushing certain items. I think warm and refreshing desserts are important. Troy has some pretty cool ideas too. He came up with our first menu.

Describe your biggest pastry disaster? My first bakery job in the mountains. We came in at 2 a.m. every day and one time the head baker turned on the bread ovens on a freezing cold day. After about an hour, we heard a loud noise. All of the windows had shattered from the heat/cold exchange. At the same place, the sugar and salt bins got moved around and one of the bakers made about 500 biscotti with salt instead of sugar.

If you were getting married, what kind of wedding cake would you want to have? Probably just a simple one. It would be up to my wife honestly. Girls are crazy about that stuff.