Share All sharing options for: Colorado Bartenders In Matching Underwear

What is this large contingent of Colorado bartenders doing posing in matching underwear? While in New Orleans attending Tales of the Cocktail, the Colorado Bartenders Guild ran the Novo Fogo 4k race in those little outfits — in the rain. Why you ask? Bartender Brian Smith of the Squeaky Bean shared the back story. 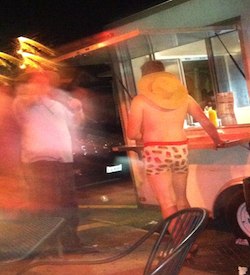 The underwear I bought for everybody this year that we wore for our Novo Fogo 4k was inspired by an incident that happened last year at Tales. Noah Heaney arrived back at the Colorado Bartenders Guild house in New Orleans and invited Nick Touch and me to eat burgers from the roach coach up the street. We jumped out of the pool in our bathing suits. This pair of what we now call Rock n Roll McDonald's happened to be my swimwear for the evening. The burger wagon was parked in front of a mojito bar in a predominantly black neighborhood in New Orleans, so it became somewhat of a spectacle as you can imagine, with a few well-dressed mojito enthusiasts snapping photos of this little white guy in his burger-and-fries whitey-tighties ordering 20 orders of burgers and fries from the burger wagon. Nick Touch snapped a photo and the rest, as they, was #mixology Facebook tag history. This year, I tracked down (with the help of Minetta Gould from the Squeaky Bean) the exact style of Mossimo underwear and provided a pair for each member staying in the Guild's house.