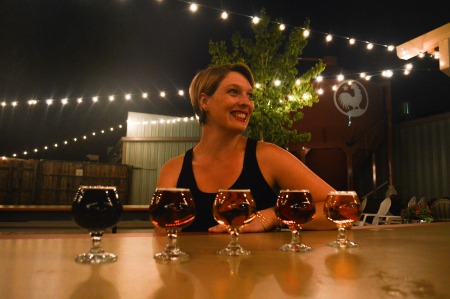 Lara Vann-Dagenhardt is no stranger to the restaurant industry. With more than 15 years experience, she's held many roles from busser to waitress, and held a long stint with The Kitchen when she first moved to Boulder in 2004. Now she's holding down the front of the house as General Manager at Big Red F's, The Post Brewing Company in Lafayette.

With seats for over 250, an 8,000-square-foot building, famed brewer Bryan Selders, and a simple mission of serving solid, house-brewed beer and fried chicken, they seem to have found the culinary apex. Eater sat with Vann-Dagenhardt to learn about her service philosophy and woes, what it's like to have a restaurant in Lafayette, patron stories that made her cry, and more.

You've been in the service industry for a long time. Tell us about your hospitality journey. I moved to Boulder in 2004 and I was going to school at CU and I got a job at The Kitchen as a waitress but I have been in the restaurant industry since I was 14. A lot of the ladies I hire here [Post Brewing] are local women and it's their first restaurant job. Some of them are still in high school and it's so my own history. I started working in restaurants as a busser when I was 14 and I really feel like restaurants are my life. I totally believe that they saved my life. I've been in it for a long time, so I tell the women today if this is your first job, it could be putting you in restaurants for the rest of my life. Don't you feel like everyone should be in restaurant business at some point in their life, right?

So my first job, I wore a red vest and a black bow-tie at an Italian restaurant. I worked there for years, then at a fine dining restaurant in Virginia. I then worked my way up at The Kitchen. That was like a family, and I worked my way up to GM. I had cultivated a love for the beer industry and it was a bucket list item to work in a brewery and so when I heard Bryan Selders was coming to town, I moved over to be the GM at Post. That's the short version of it all.

Post Brewing opened in January of this year. Tell us about the most rewarding and challenging aspects of the first half of the year? We're only been open since January 9th and we have so many regulars, it's insane. It's so fun. The most rewarding part is every night I look around and I know so many faces. The town of Lafayette is like a big warm hug. Everybody that lives out here is so friendly and they have just welcomed us with a big warm hug. We're so blessed. On a nightly basis, I'm like, "Hey Todd", "Hey Mike". They come in multiple times a week and I've never worked at a restaurant where that happened so much.

The most challenging part was we didn't realize the volume of people that we were going to have and so we didn't realize we would do hundreds and hundreds of people on a nightly basis. A restaurateur sets out to be successful, but the challenges I'm having are the challenges of a successful restaurant. For instance, I don't have the phone answered enough! I don't have more seats available for customers. Even though we opened the patio recently with another 100 seats - sometimes I feel it's not enough.

What's it like being a GM in Boulder, versus in Lafayette? Any noticeable differences? I love running a restaurant that's based on chicken and beer to be quite honest with you. I haven't met anyone who doesn't enjoy chicken and beer. It's fun. People are out there to have well-balanced beer and eat fried chicken and play corn hole and play with their families. That's the bigger difference - it's a place for families to go and have fun and be comfortable.

I also wear tennis shoes to work now. I'm wearing Tom's right now! I would never have worn Tom's on the West Side of Pearl Street [of Boulder] for work. It's just different. It's a little more comfortable. The clientele is families. There are so many people coming with their families. And I've hired all their kids that are back from school and that's a huge difference.

Tell us about your service philosophy. Making customers feel at home. The word "comfortable" comes to mind. I will want everyone who comes in the door to know that we're on their side, that we're listening, and we're giving them service that's comfortable, fun, and gracious.

How do you ensure your service philosophy is carried out by your team? I lead by example, and I'm a goofball. I'm also the first person to jump in and bus tables. It's supposed to be fun, right? But with a professional edge. The staff catches onto that. Professionalism and having fun at work is contagious.

Can you recall a restaurant snafu that you were able to turn around? I tell this story all the time actually! We have had some really long waits and it's about being able to understand the guest and make them happy while they're waiting, especially if they have children. For instance, we make sure especially if there are kids waiting, they have crayons, biscuits, and lemonade.

So this woman asked for a manager a couple months ago, so I listened to her and I tried to be really gracious. She was frustrated at our long wait time. She said "You know what I think you need? You need to set aside room in this restaurant, for locals only." And she was very adamant about this because she thought it was because of all the Boulder people who had driven up and she thought it was ridiculous. I gave her this huge grin and said, "I know can you believe it? But to be honest with you ma'am, I go to every single table and every single person is from Erie or Lafayette. We're all locals here. Isn't it fun?" She just looked at me in great disbelief. I said, "I don't know where everyone comes from, but they're all local I promise you." She was like, "Good, wow, okay great!" It's all about listening and hearing what they're saying.

In your experience, have you ever been offered a bribe or money to get seated? I had a gentleman last weekend. He was sitting on the adirondack chairs on the patio and I do ask our host team to diligently check in with people who are waiting and letting them know the status of the table. That way they know they're being taken care of and listened to. So when I finally sat this gentleman and family I had to chuckle because he tried to give me a $20. I wouldn't accept it. I was like, "No sir, that's my job!" He ended up leaving it for me as he left after dinner. I ended up giving the $20 to one of our expos, who needs new pants (his name is Willy G). I said, this is going to you and you have to buy new pants!

What is The Post's desired ambiance and experience? Comfort. It's comfort, elevated food. You get fried chicken and biscuits. I'm not allowed to have them right now by the way - I was eating four a day! We want a space that feels good when you come in. When you leave I want you to have a smile on your face and say, "That beer was fantastic." Drinkability is big too. I want people to be happy, I know that sounds "duh", but we just work really hard to make our venue feel good. You can't have fantastic food, without fantastic beer and we're trying to hit that high mark.

The building you're in is big! With 8,000 square-feet how do you manage the service and such high volumes? I have 126 seats inside, 100 outside and I have a private dining room that seats another 50. For instance on graduation weekend we put a lot of overflow there. We call it our cantine.

But how do I manage? I wear Tom's or tennis shoes. I run.

I have a management crew that is killer, and one of the girls I worked with at The Kitchen for many years and she is my right arm. I love my staff. We have so much fun and I trust that their knowledge is fantastic and they have fun with their guests. It's the crew. Working with Brett who is our head chef has been such a delight. He is so amicable. I have never met a chef who goes out on the floor as much as he does. He's such a family man and great asset for me as a General Manager, to know that I've got his back and he's gone mine is key.

What are your busiest hours and average wait time? Our busiest time on weeknights is usually Wednesday's (it's my favorite night of the week, because it's pot pie night). But the weekends are our busiest. Between the happy hour time, we're pretty busy. We're an earlier restaurant. The difference between Lafayette and Boulder is because there are so many families here, the trick is coming in after 8:00 p.m. at night to get a good table so you don't have to have that wait as long. The peak wait time would probably be an hour and a half or so.

Finally, tell us about a story that has touched your community, your staff or restaurant. I debated telling you this, because I totally cried, but it's a good story. We are in a restored VFW, so we do have a great following of veterans. There are a lot of vets in this area. So we have a vet that has been coming in. He has PTSD from Afghanistan. His wife gets to-go food most of the time, because he cannot deal with crowds. We're busy and loud and he can't be seated with loud noises behind him. So sitting at The Post isn't something he could do. His wife encouraged him to come on her birthday. He came and started to have a PTSD attack. He went and asked the hostess when their table might be free, and he said, "I just have to tell you I'm not doing very well." He was embarrassed about having to say something but he has been encouraged in therapy to say what has bothered him. He told me this at a booth last night and asked them to share this story with me. The hostess came outside and she put him in one of the adirondack chairs in a quiet corner. She said, "Do you need a hug? Could I sit with you until your wife gets here?" So she hugged him and sat with him until his wife got there. And now they've been in several times. I started bawling when I heard it. I was like I'm so glad. Not only is that going above and beyond but that's just such a community story. I'm so proud to be a part of that.

· Dave Query Gives You The Bird: The Post Is Open [EDen]
· The Ultimate Guide to Happy Hour [EDen]