Road to Tales of the Cocktail: Randy Layman's Journal

Share All sharing options for: Road to Tales of the Cocktail: Randy Layman's Journal

Earlier this month, Ace bar manager Randy Layman traveled by motorcycle to New Orleans for Tales of the Cocktail, a prestigious bartending conference. His twin brother, Ryan—lead barman at Steuben's, Bryan Dayton of Acorn/Oak at Fourteenth, Williams & Graham's Sean Kenyon, and Dylan Regan of Jimmy's joined him for the journey, bonding along the way. Despite bike trouble for Kenyon, all five eventually made it there, where Kenyon took home the prize for American Bartender of the Year at the Spirited Awards. Only Randy and Ryan Layman rode the bikes home, and Randy documented the entire trip in photos and journal entries, which he's shared with Eater.

Day 1: Kansas
Dylan Regan, Sean Kenyon, Ryan and I met up with Bryan Dayton about halfway through Kansas at one of the countless gas stations along Highway 36. Both Bryan and his Triumph Bonneville T100 were a welcome sight. 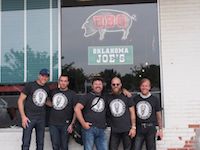 Day 2: Kansas City, MO
To fuel our day trip to St. Louis through the Truman Lakes of Missouri, we stopped at Oklahoma Joe's for our first taste of barbecue on our adventure. The burnt ends made the one hour-long wait in line worth every minute.

Day 3: St. Louis, MO
After a couple of minor mechanical issues with Ryan and Sean's bikes, we arrived at the Planter's House cocktail bar for a much-needed Daiquiri Time Out (DTO) and delicious cocktails from Ted Kilgore and his wife, Jamie. Fantastic hospitality!

Day 3: Louisville, KY
Arriving in Louisville from St. Louis we stopped by the Monkey Wrench to visit bartender and local legend Jared Schubert for cocktails and a welcome place to unwind. We may have also drank our weight in Sailor Jerry rum while practicing safe motorcycling techniques in the hotel swimming pool.

Day 4: Louisville, KY
Our first day on the ride without a destination we decided to find the best barbecue in Louisville. After talking to locals and checking out Eater for recommendations, we stumbled upon Marcus in a neighborhood called Shively just outside of downtown. This may have been the first time on the ride that we were all silent. Marcus' ribs were one of a kind. Not to be missed.

Day 5: Nashville, TN
After possibly the hottest day of riding on the trip, we made it to Nashville in time to cruise Broadway and grab a late-night burger and then head to East Nashville for drinks at Bar no.308. Great music and even better drinks. 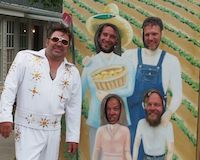 Day 6: Nashville/Memphis, TN
Dylan, Ryan, Bryan, Sean, and myself were dying to eat at the famous Loveless Cafe, but time constraints of the road only allowed us to buy sweet tea and jam from the gift shop before we were on our way to the scenic Natchez Trace. Our only goal that day was to make it to Graceland. Sean's bike had some bad luck and we had to push on without him to see the King of Rock n Roll's homestead. After taking in our fair share of Elvis and his legacy, we had a wonderful meal at McEwen's in downtown Memphis.

Day 7: Highway 61/New Orleans, LA
Stopping for our first blowout breakfast on the historic Highway 61 in Mississippi at the Blue & White Cafe, we planned our day to New Orleans. Riding through the infamous Crossroads (Highways 61 & 49 where Robert Johnson sold his soul to create the Blues) and across the Bayou, we made it to NOLA just before dark. Tired and sore, the Ramos gin fizzes at the Sazerac Bar in the Roosevelt Hotel did just the trick to snap us back to life.

Day 8: New Orleans, LA
Our second day off of riding as a group we were honored to be behind the bar together at the William Grant & Sons opening party at Tales of the Cocktail. Nothing like riding your motorcycle 2,400 miles to do what you love with the best bartenders in your home state. Incredible.

Day 10: Houston/Austin, TX
Ryan and I left for our first day of riding without the group through rain storms and heavy winds all the way from New Orleans to Houston. We also had a very well-rounded day of dining. Breakfast at Cafe Du Monde, lunch at a Whataburger just outside of Houston, and dinner off of food trucks on 6th Street in Austin. Not a bad day of riding (and eating).

Day 11: Marfa, TX
Leaving Austin early we ate brunch along the Riverwalk in San Antonio and rode due west via Highway 90. The west Texas desert is hot, dry, and long, but our arrival at El Cosmico in the small town of Marfa near Big Bend National Park felt like we were finally headed home, back in the West. Dinner at Cochineal was incredible, and worth the 450-mile ride from Austin.

Day 12: Santa Fe, NM
Santa Fe gave us two great last meals before sleeping our final night away from home. Taberna was a great start to our night with octopus carpaccio and kalimotxo (red wine and cola). After Taberna, we enjoyed a delicious meal at Coyote Cafe. The house margarita, Señorita, made with a salted lime foam was the best drink to say goodbye to the road.