By the end of August, Justin Lloyd of Star Bar will open The B Side in the booming Uptown neighborhood. The new bar and casual eatery is located at 1336 E 17th Avenue, next door to the District, in a space that formerly housed Serioz Pizza and Pasquini's prior to that.

The BSide will bring an eclectic and unique beer selection and a creative cocktail list, complemented by a food menu created in collaboration with chef Jensen Cummings. The chef, whose experience includes the Slotted Spoon and TAG, will bring fried chicken, tv dinners, throwback versions of salads, fried Bologna sandwiches and more for lunch, dinner, and late night.

"We are reimagining some of those old school dishes, the iconic dishes of the 50s and 60s," explains Cummings."The tv dinners, for example, are such a part of the culture of those decades and we want to bring them back in a nonchalant and new way," he continues. Guests should expect to see plates like the Meat Loaf Wellington, a combination of the classic meatloaf and beef Wellington, that can be enjoyed with sides like green beans (think green bean casserole-meet-green bean Almondine) or cheesy corn. Part of the appeal of the menu is the throwback flavors and textures, recreated with more modern cooking techniques and good ingredients.

A star of the menu will be the fried chicken , a gluten-free version, marinated in coconut milk instead of the more traditional buttermilk, fried in a pressure fryer and served hot or cold as a late night snack. "The gluten free flour keeps the outside crispy and the process [the pressure fryer] keeps the inside moist," Cummings explains. The idea of serving it cold is Lloyd's who is convinced that in this preparation, the dish will be a hit. 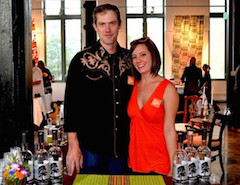 The space, which consists of three houses put together, has been updated to match the vision of the BSide. The floors were refinished, a new coat of paint with vibrant colors was added, and the tabletops, inherited from the previous tenant, were repurposed. Seating will be plentiful with nearly 300 chairs inside and on the two patios. "Sometimes it is a lot more work to figure things out in an existing space than it is to start over, but I like the challenge- it's kind of like a rubix cube," Lloyd says. "There are so many doors and nooks, but it has character the same way that Star Bar does," he continues.

For the booze selection, the beer geek promises 30 taps. "Everybody told me I was crazy when I opened Star Bar because of the beer selection and the way we always change it," Lloyd explains. "Here it probably won't be quite as crazy esoteric as Star Bar, but still very fun. The thing that really excites me is finally have access to a kitchen again and be able to pair food and drinks again."

More than a great selection of brews, the BSide will serve classically inspired cocktails. "We approach the cocktail selection and spirit list in the same way we approach the beer. I look at spirits that are great and that need a champion, a supporter because they make good booze but are not a large producer. I like to support those people," Lloyd confesses.

When it launches, the BSide will open daily at 11 a.m. and it will serve lunch and dinner. A happy hour and late night menu will be offered.

· The Scoop on The District, Now Open in Uptown
[EDen]
· A Handy Guide to Dining in the Uptown Neighborhood [EDen]