Welcome to the Sugar Files, where Eater uncovers and features the city's best pastry talent. In this edition, executive pastry chef Zach Rampulla of Salt gets the spotlight. 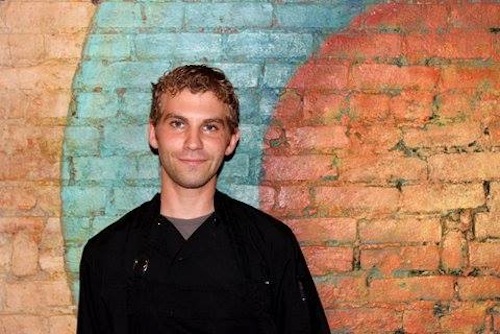 Zach Rampulla has worked as executive pastry chef at Salt Bistro in Boulder for the last two years. Currently operating as a one-man team in Salt's pastry department, he is responsible for the breads, market-driven desserts, and most recently to accommodate the growing demand, the gluten-free pastry program. He pulls it off without a deck oven and a ton of determination. At 26 years old, Rampulla honed his sweet skills in the last eight years at many restaurants, including The Kitchen and Frasca Food & Wine. He talks about the people that helped him get to where he is today, not having an appetite anymore, and the beloved budino.

How did you get into pastry? My mom was a really big influence on me. When she was in nursing school, she would bake and sell her products at local cafés and coffee shops in Long Island and so I learned a lot from her. When we moved to Colorado, she was working as a nurse full-time and she'd usually come home late. There would always be stuff to bake- cookies or brownies- so I started doing that. I started cooking for myself when I was about 12. Then on Friday nights, we'd get together and everyone would pitch in to cook a huge meal together. In my early childhood, my grandma cooked a lot; I picked up things from her. She's from Spain and had a big influence in our household. She was a very dominant and powerful woman, and her cooking was awesome. It was a very beautiful part of my childhood. I feel like I never eat anymore.

Why don't you eat anymore? Because I'm working around food all the time and I have no appetite. The only time I enjoy eating is when I go out to eat. Otherwise it's just getting the sustenance I need to stay alive.

Do you eat many sweets outside of work? Only if I'm sharing it with somebody. It's usually more research than it is trying to enjoy something. I'm really blown away when I can find a pastry chef that makes me want to order their desserts, either by something that's creative on their menu, or by seeing it go out to the table next to me thinking, I'm definitely saving room. I never eat ice cream anymore. That used to be one of my staples especially when I was working at Frasca. The ice cream there is phenomenal.

Where do you like to go out to eat? Amu is definitely my favorite Boulder restaurant. Last time I went there I had uni and it was like God food. It blew my mind. Duo is awesome. They kill it. If I had more money I'd go eat at Frasca again. I like pizza a lot. Basta does a good job. Locale is awesome.

What drew you to working at Salt? I really liked Bradford Heap's passion and drive to work with local farmers. To see the farmers coming in the back door after the farmers market and anything they couldn't sell we will take. It's cool being able to utilize their product. It's like we're helping each other out. It's more of a symbiotic relationship than going to the farmer's market and getting the best ingredients; we're really helping the farmers out here. That brought me in here. What kept me is he has given me a lot of creative freedom. He's given me complete control over the menu, but he's encouraged me to go in certain directions. Like the gluten-free program, that was something he urged me to spearhead, and to be able to do that gave me confidence, and helped our relationship.

Where do you get your inspiration for your pastries? Everywhere. Sometimes I'll just be eating a bar of chocolate and something will just click. I try to read a lot. I really like reading Art Culinarie. I really like Giorgio Lucatelli, I have his cookbook Made in Italy; it's unbelievable. I try to associate my style which is retro-modern. I like to take ideas of things that have been around forever that people are comfortable with and then expand on that. I was doing a red velvet cake in the winter and I really wanted to do something utilizing beets which we are still getting in locally. I tried to utilize the betalain inside the beets to try to use them for pigment. I really had to break it down scientifically. I researched properties of betalain and how they react to acidity and heat. At first, I was making it and the batter would be bright red and then I'd bake it and it would come out and be this dull grey-brown color. It was cool to be able to change my recipe and to have that pigment survive. I ended up putting a lot of acid inside the cake: lemon juice, vinegar, and buttermilk. I kept testing and testing it, and finally, it was exactly where I wanted it to be.

You don't have a pastry assistant. Does somebody plate your desserts? Yes, thank God. Although, Friday and Saturday nights I'm on the line, making sure things are going out the way I need them to. I can be, I don't want to say a psycho, but I can definitely be pretty picky. I want the cooks to really get my style of plating. If say, the chantilly isn't done right or the ganache is a little thick, I'll get on the line and help them get their product to where it needs to be. If they go down, it's my fault, so I need to be there to make sure that I'm setting them up for success and not failure.

Did you help create Pizzeria Locale's budino while you were working at Frasca? I did. That budino. We were testing it. The pastry chef Adrienne gave me this recipe one day and she's like, here, go. I made it and it came out terrible, and then she made it, and it came out terrible. I began looking up online about making custard with cornstarch. I was reading that if you put it into a blender while it's hot it will pretty much vaporize any of the particles that have a tendency of curdling. Basically, when you are making a pastry cream or a butterscotch, you're curdling the egg and the cornstarch is allowing it to thicken as it's curdling. You can have a nice smooth, silky texture after it has curdled by putting it into a blender. We definitely tweaked it and I think that's still the method that they use now. Now I make some mean butterscotches, I did an amaretto one, a bourbon one, all sorts. The budino…it makes me all nostalgic.

What would your dream job be? While I was at the Kitchen, I did a stage at Quince in San Francisco. They have the most beautiful pastry kitchen I've ever seen and it works for their two restaurants, including Cotogna, their more casual spot next door. Their pastry kitchen is its own little entity that lives and breathes inside both restaurants. I got to work service a couple of nights there. It was awesome to see how plating would go out. They got to do their own molded chocolates. I want to be in a kitchen where we can afford to have five or six pastry chefs and we can work together to make the best pastry program where we are completely separated from the other parts of the kitchen, we can have our own flow and dynamic.

What is the best part about being a pastry chef? The best part of being a pastry chef here is that I get to really run my own department. I'm responsible for the success or failure of it; and I have succeeded and failed here, but I haven't failed twice in the same manner. If something doesn't exactly work out or it's not exactly what I want it I'll tweak it or I'll just take it off the menu. I'll either get it to where I need it to be, or if it's not happening in a timely manner, then I won't do it. I've been challenged in certain ways but I've also developed a lot of skill here, and it's really taken my career to the next level.

What is the most challenging thing about your job? The kitchen is very small and a lot of times I feel like I have to fight my way through the kitchen for oven space or equipment. I'm working without a deck oven, so I've been doing all of my baking out of convection ovens underneath the range on a sauté station. That's been challenging, but I've been able to manipulate them to serve my purposes. When I'm baking bread I basically have to get on my knees to lead it in there. A real industrial oven would be great. Aside from that, I've done some awesome stuff in this restaurant. I make all my own croissants by hand.

I was going to ask you if you make pastries for brunch. We always do house made doughnuts with rotating flavors. Then we run pastry specials. Sometimes I'll do an almond croissant. Sometimes I'll do plain croissants and we've starting making breakfast sandwiches with them. I also make puff pastry by hand, and I'll make turnovers or savory tarts.

Do you have any advice for aspiring pastry chefs? Learn from all the other pastry chefs. I feel like there are people who will take you under their wing and show you the ropes. I've been in this industry for almost ten years now and the people that I've learned the most from have been the people who have taken the time of day. I learned the most from Mallory Wallace at Frasca than I did from any other person, and she wasn't even the head pastry chef. She really cared about what she did and she cared that I did really well. That really inspired me. Now that's the way I want to be; that's how I try to run my department. I work with all the other cooks. Also, read. Cook. Try stuff. Be creative. Stay Focused.